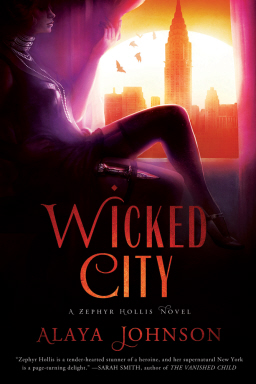 Yeah, pretty much the last thing I expected to distract me this week was yet another urban fantasy featuring a kick-butt female protagonist and a city overrun by vampires.

In my defense, the city is Prohibition-era Manhattan and our protagonist Zephyr Hollis, newly arrived from the ranches of Montana, isn’t a vampire hunter but a socially conscious teacher who’s not above mingling with men — and the Others, otherworldly creatures that include vampires — in discreet speakeasies. The quirky setting and fine attention to detail intrigued me, but it was the engaging narrator that kept me reading. The novel is Wicked City by Alaya Johnson, and it was this jacket copy that first hooked me:

It’s summer in the city and most vampires are drunk on the blood-based intoxicant Faust. The mayor has tied his political fortunes to legalizing the brew, but Zephyr Hollis has dedicated herself to the cause of Faust prohibition — at least when she isn’t knocking back sidecars in speakeasies.

But the game changes when dozens of vampires end up in the city morgue after drinking Faust. Are they succumbing to natural causes, or have they been deliberately poisoned? When an anonymous tip convinces the police of her guilt, Zephyr has to save her reputation, her freedom and possibly her life. Someone is after her blood — and this time it isn’t a vampire.

In a New York City populated by flappers and vampires, debutantes and djinn, it’s best to watch your back. You never know what’s lurking in the shadows.

It’s too early to tell if the novel is going to live up to its early promise, but so far indications are good. Wicked City goes on sale today; it is available in hardcover from Thomas Dunne Books, at $25.99 for 306 pages.

I am baffled that any author, at this point, wants to invest energy in the utterly trite, overdone, and banal vampire theme. Vampire stories need to go away for ten years or so before they can be interesting again.

You know, I hear the same thing about fantasy. “I’m baffled that any writer, these days, wants to waste their time in the utterly overcrowded field of fantasy. Elves, dwarves and orcs need to vanish from the shelves for a generation before they’re interesting again.”

WICKED CITY isn’t for you, obviously. It’s for the latter kind of reader, and based on sales figures there are still hundreds of thousands of them. Saying an entire genre needs to disappear just because you happen to have tired of it shows real contempt for the entire field.

I’m happy there are writers like Alaya Johnson out there producing exciting new work for her audience. If you’re not interested, don’t pay attention. It’s pretty simple.

I feel similarly to ONeill.

The ‘Vampire’ is a /archetype/trope/convention/tool/symbol that has found a lot of interest lately.

‘Vampires’ are actually much like ONeill suggests, something on the meta-fictional level akin to ‘Elves,’ ‘Wizards,’ ‘Adventurers,’ ‘Devils/Demons,’ ‘Thieves’ and so on.

You see all of the above + more ( sometimes in the same book/series! ) but hopefully not in the same ways.

That’s biggest difference to me.

I am not automatically thrilled with, nay, wary even of any boom in the tropes/conventions/archetypes because it can’t all be that great ( at least to me ).

Not unlike in the 1960-70’s there was a Sword + Sorcery boom of sorts only about half of it has stood the test of time.

Any ways people can write about whatever they fucking want if you ask me.

Even if I don’t prefer the things their minds run too.

“Saying an entire genre needs to disappear just because you happen to have tired of it shows real contempt for the entire field.”

No, just for the most tired, overworked, and trite genre in the field.

If I were reviewing manuscripts for a publisher, vampire stories would go over the right shoulder as soon as my eyes hit the v-word.

So hey, ARE there any interesting Elf / Dwarf / Orc stories hitting the shelves these days?