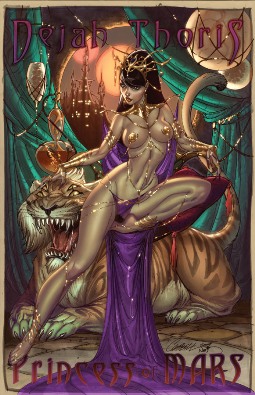 Yeah, so I saw John Carter, and like everyone else that I have heard saw it, I love the movie. In fact I was so taken by it that I decided I had to start a new thread in Art of the Genre, so appropriately the lovely and fierce Dejah Thoris will be the first icon in this series.

Now it’s both funny and sad to say this, but the marketing of the female lead in both science fiction and fantasy has been, and will ever be, the epitome of male chauvinistic. My wife loves nothing more than to rail against the infernal machine that is the business in which I’ve chosen to make my livelihood from [or lack thereof], but it’s hard to fight such a powerful Goliath.

So, I move through this art business as best I can, trying to navigate the turbulent waters between what is overtly offensive to women and acceptably sexy to all viewers. Since the business model, however, is geared toward young teenage boys, you can see how it’s difficult to try to sell anything other than sex.

Thus we find images of Dejah Thoris sprawling in half-naked glory all over the internet, and yet when I saw John Carter I could have stood up and cheered for Disney’s take on the showing of flesh in this particular film.

Dejah, as beautiful as she was, didn’t flaunt anything the men of the move didn’t as well, and I was twice as taken with that fact that although John Carter of course went barbarian bare-chested as any slave should, that red Martian warriors wore armor that fully exposed their midsections, no matter if they were male or female. 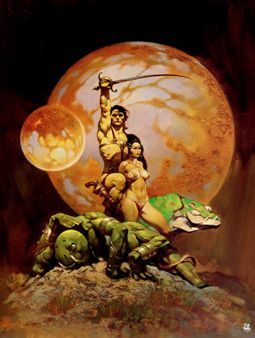 It’s a bold take, and perhaps a reason for the films shaky numbers [although I blame it more on the fact that it’s a sweeping love story that was never discussed in any trailer for the film and therefore lost the female demographic that might have helped carry it]. I suppose, in the minds of most viewers, if you go to see a film about a barbaric Mars, you should see standard swords & sorcery fare from the 1980s, but John Carter never delivered that.

Anyway, let’s take a step back from the Lynn Collins version currently out on the big screen and see what Edgar Rice Burroughs had to say concerning her:

And the sight which met my eyes was that of a slender, girlish figure, similar in every detail to the earthly women of my past life… Her face was oval and beautiful in the extreme, her every feature was finely chiseled and exquisite, her eyes large and lustrous and her head surmounted by a mass of coal black, waving hair, caught loosely into a strange yet becoming coiffure. Her skin was of a light reddish copper color, against which the crimson glow of her cheeks and the ruby of her beautifully molded lips shone with a strangely enhancing effect.

She was as destitute of clothes as the green Martians who accompanied her; indeed, save for her highly wrought ornaments she was entirely naked, nor could any apparel have enhanced the beauty of her perfect and symmetrical figure.

Yeah… ok, so it’s not just an ‘art thing’ I guess. Looks like Burroughs, who first wrote our dear Dejah in 1917 with The Princess of Mars, was thinking the reading public needed some skin as well. This interests me because I have to wonder if Burroughs was alive today, and a writer, in what genre would he write… I’m going to say Urban Fantasy, which literally makes my skin crawl. 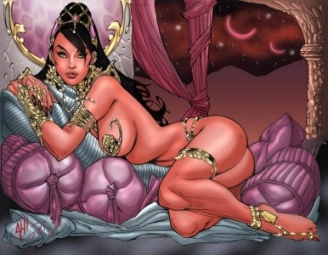 But back on topic, that of course being the sheer hotness of Dejah Thoris as portrayed by her creator almost a full century ago. I mean really, could a title be better than ‘A Princess of Mars’? That in itself is like taking every standard princess fairytale and upping the coolness by a factor of 10, so thus Dejah needs to be all that and a bag of chips. Certainly the bevy of artists who’ve portrayed her would agree, and so Dejah’s somewhat benign ‘damsel in need of rescue’ persona changed from the cowering girl on the original cover to the sex-starved slave we see in most versions today.

You know something else that I find funny, that she’s a mom. She becomes the wife of John Carter and the mother of their son Carthoris and daughter Tara. There is an acronym that could be used here, but I’ll beg off and just say that is something we don’t often see with our iconic heroines, the mantel of later motherhood. For some reason, the puritanical nature of the bread a butter American man seems to think that the moment your wife has a child she’s not to be thought of as a pole dancer because… well, you know, she’s the mother of your children!

Dejah, however, never seems to fade from the limelight of the half-naked vixen, and so she goes today into the desert world still clad in loincloth, jewelry, and a smile. Ah well, the fabled immortality of our icons never fades I guess, so as long as there are hormonally active boys out there, I guess Dejah will continue to draw a young, healthy, and heavy breathing fanbase.

I just wish she weren’t so generic. Photoshop those structurally improbable bits of gold jewelry onto any dark-haired centerfold, and she’ll be exactly as evocative, and exactly as unevocative, of Dejah Thoris as those women are. She was an actual character to Burroughs, even naked, but she’s been a mere excuse to artists and art directors ever since.

There’s nothing wrong with those images, per se, but they do wave a giant banner that says, “Chick readers, you will be bored by Burroughs’s books!” And it’s not true.

Sarah: I have to agree. These images are pure cheesecake for cheesecake sake. Someone out there should be able to make us identify with Dejah, as I think Disney did in the movie, but I haven’t seen it in almost all of the art I can find.

I loved the new John Carter Movie ! I am glad that you have found some Art and posted it here…!!!
I visited the Disney website and I was glad to see some good John Carter Swag …!
The Edger Rice Burroughs website is just amazing with a whole lot of great Pics from the film and of course tons and tons of art and stories!!!
The barsoomian Blade has a few Hilarious stories..!
I wanted to remark and say that Dejah Thoris is dramatic theme in the John Carter series.
Not only is John Carter going on Adventures the width and breath of Barsoom but The love of his life is always being kidnapped by villians which is an easy plot device to drive the story along …. but it works well because he would give his life for Dejah Thoris….
After all…..
What use is breathing without the one you love…

Massey: Agreed, John Carter was a solid if a bit long movie, and I’m sad it didn’t make what it needed to. I’m also saddened that for some reason female characters in American fiction need to be made into sex symbols by artists or ADs demanding that artists do them that way. Ah well, we still have the books, right? 🙂

What everyone seems to forget for the Mars series of books is that EVERYONE is naked. No loincloths, not a stitch, except maybe a cloak and possibly a harness (with the exception of the few times they went to a cold area). Nobles and free citizens had jewelry, and slaves had nothing. Hell, they were repulsed to see that the humans of earth covered their bodies with all that cloth!

John Carter’s john thomas was swinging in the wind the entire series.

Just keep that image in mind when you next read about him hopping along fighting four armed giant green men.. who also have their john thomas’ bobbing around.

Black Gate » Blog Archive » Art of the Genre: Art of the Iconic Female #4: The Baroness