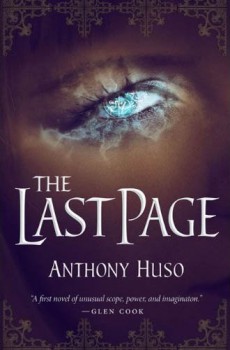 The plot is well crafted, but unsurprising. The story flows smoothly, but only near the end, when the book edges into horror, does the truly unexpected arise. The first volume of a two-book series, it manages the trick of both providing a satisfactory conclusion and keeping the story going; in fact, the conclusion suggests the story has taken a turn, and perhaps is going to head in wild new directions.

But what really makes this first book work is its language. The prose is strong, quick and dense in the best ways. The diction, the word choice, is inventive; the imagery is both original and concise. At its best, Huso’s language recalls Wolfe or Vance, though the dialogue in particular is more quotidian than theirs, and some of the rare words he uses don’t seem to be handled quite correctly.

On the other hand, Huso invents new words when he needs to, fragments of new languages, new pronunciations for new diacritical marks (thankfully, there is a pronunciation guide; regrettably, it is hidden away on the last page of the book, a potentially ironic touch which is nevertheless inconvenient if you don’t know from the start that it is there). He creates a world defined by holomorphy, a kind of blood magic, and by a host of arcane sciences; by lethargy crucibles, metholinate, and solvitriol. The lushness of verbal invention, with exposition kept to a minimum so that you come to understand what is important simply by following the story, is incredibly effective at building the setting.

The difficulties here are at a deeper level. Notably the characters, although original in concept, are not particularly profound in their execution. Given that the book is a love story at its core, the fact that its main characters are often bland represents a real difficulty. Sena comes off better, here; she is the more interesting character, more aware of the prices she is paying, the choices she is making. Caliph Howl, on the other hand, is initially depicted as a man who carefully plots his moves – he creates a counterfeit book, taking considerable time and effort, in order to gain revenge on a classmate at school; he chooses to suffer severe corporal punishment in order to be alone with Sena – but this does not seem to reflect anything deeper in his personality. The book spends a fair amount of time inside his head, but his way of thinking does not match the cold-bloodedness of some of his actions.

To secure his reign, Howl agrees to darker and darker bargains; but the toll this takes on his moral sense is not convincingly depicted. He mourns what he does, but his choices don’t seem to fundamentally change who he is. The possibility of his abdicating, and thus saving his country from a devastating civil war, is raised at one point, and then ignored. I would like to think that this was done in the interest of building Howl up as an unlikeable machiavellian figure, but I can find nothing in the book that convinces me that this is in fact the case. The novel seems untroubled by Howl’s actions.

But on the whole the book does not seem to have a lot on its mind. The play with language is wonderful, the depiction of characters using different languages and different alphabets is excellent, the use of a magic book as a major plot element suggests a metafictional touch given the title and how it relates to what Sena goes through at the end of the book, Caliph creating his counterfeit book at the beginning of the novel looks like it might tie in – but as much as I try, I can’t see what all the cleverness is in aid of. I don’t see what these images add up to. Thematically, the book seems empty. It’s clever, and it looks like it ought to have some ideas at its core, but so far as I can see, it doesn’t. It’s intelligent and original, but not profound.

Of course, I could be underestimating Huso. This is only the first part of the story, and there might well be some twist or revelation coming which will make all the pieces presented so far fall into place and mean something more than I can presently see. Huso’s writing is strong enough, his sensitivity to language and what can be done with language great enough, that I am unwilling to discount that possibility out of hand. The potential, the skill, is certainly there, whether it is realised in the next volume of this series or a later book. But as a stand-alone, the novel feels like a missed opportunity, despite its craft.