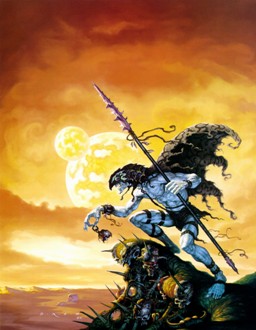 The summer of my sophomore year in college a friend of mine bought a copy of TSR’s Dark Sun Campaign Setting circa 1991. As I’d just gotten into my newest comic book obsession, I didn’t have the cash to spend on RPGs so I was content to let him spend his money on the game as I relegated myself to being a player.

I found the world fun, surprisingly new for stodgy old TSR, and although the campaign I played in ended abruptly when my human gladiator decided he’d had enough of a Halfling in the party and clove him in two, it was still something that stuck with me for many years afterward.

To me, the demise of the setting in 1996 revolved more around the rise of Magic the Gathering and less about TSR’s new age of design that was being brought forth around 1990. This isn’t to say that those works are innately perfect and simply died as the foundation of the industry was eroded away because I often found them lacking, particularly in the department of art.

Now certainly I couldn’t have dreamed that the newest member of TSR’s pit, Gerald Brom, would go on to be one of the greatest fantasy artists of his generation, but he did bring a very different feel to this new universe.

At the time of the setting’s release, I wasn’t taken with Brom, probably because he was such a dark divergence to the talents of high fantasy stalwarts Elmore, Easley, Caldwell, and Parkinson. Still, as shocked as I was by Brom’s take on AD&D, I was even less taken with the interior black and white illustrations of Tom Baxa. 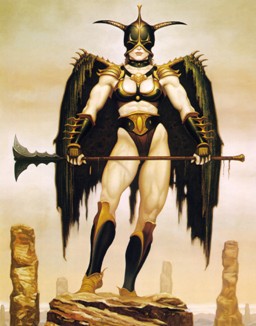 Sometimes, artists just don’t ‘do it’ for those looking at their work, and that’s the case for myself and Baxa. Certainly, that’s no disrespect to Baxa or his work because his contributions to the industry are many, but where Dark Sun is concerned I wasn’t captured.

Still, even after I stopped playing, Dark Sun kept on rolling, supplement after supplement coming out for this setting. With each new contribution Brom and his marvelously apocalyptic covers became more and more popular, and Baxa road that momentum as the two became linked as the paragons of what this game had to offer.

Nearly 15 years later, as I started my journey as an art director I took the opportunity to go back and collect a large helping of these old games, and I must say my reverence for what Brom brought to the RPG field grew with each newly acquired offering along with my tastes for his work.

His covers have turned into some the finest creations any RPG has ever had, and although I’ve still no fervor for having darkness in my games, the way he portrayed Dark Sun is beautiful to behold.

The colors are subdued with tinges of red, yellow, and grey mixing into a desert world where mummy wrap is a lovely couture and violet pigments and porcelain skin lend toward both odd and supple loveliness.

Although short lived by some standards, Dark Sun only in full release from 1991-1996, the game still held a nice niche market for the genre and it would later be seen as so profound that it saw a re-release in D&D 4E in 2010. As I have no sales numbers for either release, I can’t attest to the settings overall success, but I will say that the art from the game still holds validity today, and if you’re looking for an apocalyptic fantasy setting you could do far worse than Dark Sun.

I never had the opportunity of playing the 2nd Dark Sun Campaign Setting, although Brom’s art was what made me interested in DS, in the first place. As I playtested 4th edition last year, DS seemed more like a generic desert D&D campaign than the savage post-apocalyptic setting of the ’90s. It’s when I started collecting the DS novels that Brom’s actual contribution became evident. He was to DS what Larry Elmore was for Dragonlance. Many (or most) characters, at least in the first five novels (a pentalogy, which reads much like a full 1st-20th level campaign), where creations based solely on his paintings.

Periklis: Its an interesting thought, writing for art instead of doing art after something is written. As a writer myself, I’m often moved to write a story around a piece of art that I’ve seen, and I can see how Brom’s work easily lends to this. His characters in DS are outstanding studies, and I’d have loved to take them out for a spin. Thanks for posting!