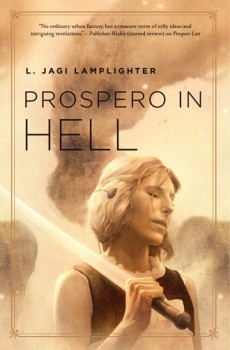 As you might expect, L. Jagi Lamplighter’s Prospero in Hell, the second volume of her Propsero’s Daughter trilogy and follow up to Prospero Lost, is loosely based (very loosely) on Shakespeare’s The Tempest. In Lamplighter’s retelling, Miranda, daughter of the magician Prospero, does not marry Ferdinand but instead becomes the virgin devotee of the Greek goddess Eurynome, which qualifies her for a life extension and youth preserving elixir she can share with her father and eight siblings, the results of various Prospero marriages over the centuries. Until Miranda becomes a full-fledged “Sybil” of the Eurynome cult, however, there is insufficient quantity of the elixir available to share beyond her immediate family members. Consequently, the Prospero offspring who marry and have children are doomed to watch them live out their mortal lives. Except, of course, Miranda who must of necessity remain unattached as a condition to continue to receive her elixir allotment.

Flash forward to the present day and Miranda is still not a Sybil, with little idea how she is supposed to be deemed worthy. In the meantime, Miranda runs Prospero, Inc., a multinational corporation that maintains business contracts among magical entities designed to avoid “natural disasters” such as hurricanes and earthquakes these sprites would normally unleash, thus allowing human existence to continue and perfect its technological progress.

Given that the third and final volume is titled (maybe you’ve already seen this coming) Prospero Regained, you would be right to surmise that there are references to Milton and Shaw, as well as Dante. In fact, there is probably just about any mythological allusion you can think of that pertains to the subjects of magic, the afterlife, demonology, sibling rivalry and the human condition in general. Also thrown in is a noir detective motif, with a sprite who takes human form as a Sam Spade persona on the case to help Miranda find her father who, despite the frequency of mention in the titles, has yet to make an appearance after two volumes – Prospero has been kidnapped by demonic forces and taken to Hell for reasons not yet entirely clear. Indeed, the series title of Prospero’s Daughter is the most precise in that this is Miranda’s story, told from her first person viewpoint, of how she rallies her less than convivial family members to persuade them to enter Hell and rescue their father.

Promotional blurbs liken this series to Roger Zelazny’s Chronicles of Amber because it deals with the dysfunctional relationships among superhuman family members who have very little respect for ordinary people or each other. Indeed, according to Lamplighter herself, the character has less to with Shakespeare than a character in a role playing game based on the Amber series.

Lamplighter’s husband, John C. Wright, covers similar territory – as well as a similar penchant for employing a plethora of classic mythological tropes – in his Orphans of Chaos sequence, a sort of coming of age fable for the offspring of the Greek Gods imprisoned in an English boarding school. Miranda’s story is also a coming of age tale in which a centuries old “girl” like any adolescent (well most of them, anyway) gradually comes to realize there are other people besides themselves to consider, and that adult motives – even those of a father – are not quite as black and white as a teenager might think. Indeed, this series might qualify as young adult fantasy; the treatment of a rape (remember that, in The Tempest, Caliban attempts to ravage Miranda), in particular, is so matter-of-fact that Lamplighter might as well be describing an unfortunate car accident as a supreme assault on one’s body and soul. This decision to tread lightly might be to temper the horror for younger sensibilities.

Or, just as likely, this is just yet another device to move forward the “Perils of Pauline” plotting, which comes complete with fortunate coincidences, last minute arrival of the cavalry, convenient revelation of hidden powers and all sorts of improbabilities, if it is possible to consider things improbable in a story about a feuding family of magical immortals based on a play by a guy considered the greatest writer of the Western world that some people argue never existed.

Alas, Lamplighter (whose name also has certain mythic connotations as a “bringer of light” or enlightenment, though presumably it is not a pseudonym), would seem to be taking as much inspiration from C.S. Lewis as Zelazny or Shakespeare, including the character of Father Christmas and some avowedly Christian notions of the superiority of a god who forgives as a matter of mercy as opposed to a god who requires devotional servitude (a distinction that gets blurred in actual practice). Despite their polytheistic backgrounds, the Prospero clan is mostly Protestant, though Gregor remains allegiant to Rome, probably because in a previous incarnation he was a Pope. Perhaps that is the biggest fantasy, that diverse theologies could so easily co-exist.

Or, maybe not. The concluding Prospero Regained, due out sometime in 2011, promises that “…we finally meet the Dread Magician Prospero and Miranda learns the truth about many things.” Until all things are finally revealed, we can only guess where this is headed: to hell and back.

David Soyka is freelance copywriter, a former newspaper reporter and English teacher, author of ficiton and non-fiction, and a DJ at WTJU-FM. Find him online here.