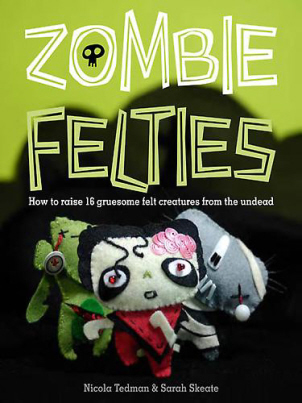 Though it doesn’t happen very often, occasionally I am left speechless.

Generally this occurs when watching an episode of True Blood during which there is an abundance of vampire and werewolf nudity. However, sometimes it happens for other reasons as well.

Seeing the voodoo doll display on my desk along with the “I’m So Goth I Poop Bats” bumper sticker on my file cabinet, an insightful co-worker brought me the coolest “how to” book since that one that contained the instructions on how to bring a Golem to life.

Nicola Tedman, a special effects artist who worked on the Harry Potter films, has awaken her inner George A. Romero and focused her creative attention on the malleable, fuzzy softness of felt.

Zombie Felties: How to Raise 16 Gruesome Felt Creatures from the Undead is an oversized paperback which instructs the reader in the ultimate in anti-Martha Stewart craft making.

Inside, would be Zombie Masters will find remedial instructions for more than 15 zombie creatures, including a Romero-esque “Day of the Dead Zombie,” a “Dead Ducky” and my personal favorite the “Vampire Zombie.”

Not only are they so simple even I can sew them (no sewing machine needed), each instruction is accompanied by an amusing “biography”:

What’s that you say? Vampires and zombies don’t mix? Ah, but sometimes they do. It’s hard to say whether the nasty result is dead or undead, but despite the monocle and the suave presentation, this little creature is certainly rotten to the core…
with fangs. 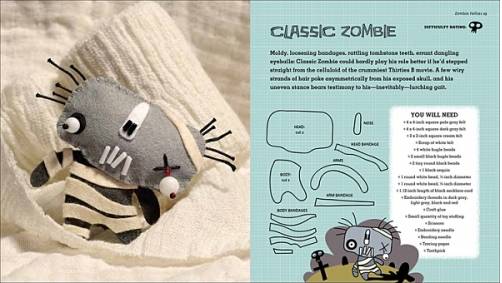 If that wasn’t enough, the zombie projects have a “skull rating” indicating the level of construction difficulty. For instance, my Vampire Zombie had a “three skull” difficulty score, probably due to the use of fabric glue.

Or are you saying I’m the only one who has ever hot-glued my fingers together…?

Once I got over how incredibly clever this concept was, I looked up Nicola and found that she’s already graced her public with a follow up tome: Steampunk Softies: Scientifically-Minded Dolls from a Past That Never Was.

Even if you’re unfamiliar with the term “Steampunk,” (and I’m really going out on a limb with that statement) chances are you’ve already discovered it through the works of Jules Verne, H.G. Wells, Tim Burton, Mary Shelley, or Lemony Snicket.

For the segment of the Black Gate readership that rarely looks up from their Tolkien novels, “Steampunk” is an artistic movement that includes stories involving steam-powered versions of modern technology in a fictionalized Victorian setting.

Like their Zombie counterparts, Steampunk Softies are simple enough for even a sewing novice to construct. A short biography accompanies each softie, providing a background story for the characters. 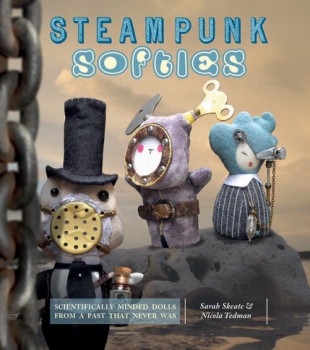 Also included are a complete list of supplies, illustrated step-by-step blueprints, and a handy, back-of-the-book reference section that provides tips on aging and distressing project materials.

There’s nothing worse than Steampunk anything that looks too mint.

Both books are available at Amazon for around $10 as is the total material cost for making several dolls.

So just when you thought you were facing the long, dark months until spring with nothing to do, it’s time to have some friends over for adult beverages and evening filled with glue guns and pointy implements.

Zombie making party at my place.

Plan on making a zombie or have other ideas for passing the winter months? Post your (G-rated) ideas or drop me a line at sue@blackgate.com.

Hmm … this post looks like a great place to plug a neat little Christmas present I received.

It tells the story of a poor unfortunate who starts out mostly unaware that the Zombie Apocalypse is come, until they get infected.

Then it follows their journey of manic feeding and gradual decay, three or four haiku per page, for roughly 140 pages.

I loved every syllable of it, and I’m guessing you would too. 😉

Love it? I just bought this brilliant piece of poetic perfection.

&$%*!@$% interns are supposed to be keeping me informed. Thankfully I have you.