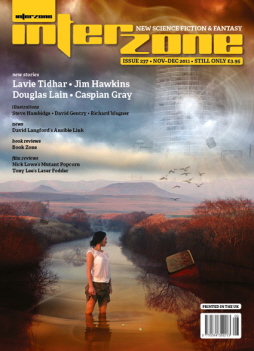 You can subscribe to the print version here, or the electronic edition here; there’s also a special discounted rate for a joint subscription to both Interzone and Black Static. Lifetime subscriptions are also available. What you’re buying, in essence, is a 10-year subscription at the current rate.  If you think you’re going to live for at least another decade, and you think Interzone will also be around for as long, this could be a bargain for whatever time you and the magazine have after that. If that weren’t enough, you can also opt for joint lifetime sub that gets you sister publication Black Static for a slightly reduced rate.  Sign your life away here.

You can’t subscribe electronically. Fictionwise removed those opens a long time ago.

Right, my error. You can buy back issues in electronic format at Fictionwise.