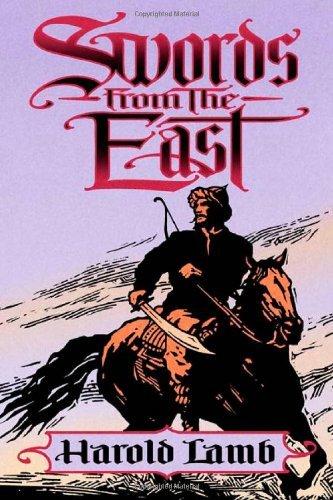 It must have been something, the pre-television age when pulp magazines were a widely consumed form of entertainment. I can only imagine the anticipation of opening up one’s mailbox, finding inside the latest copy of Adventure magazine, and settling in to an evening of rousing tales by the likes of Talbot Mundy, H. Rider Haggard, and Harold Lamb. It was a time of pulse-pounding action and tales of distant historic epochs on the printed page.

Those days are now gone, and for many years the contents of those now-yellowed pulps were largely inaccessible, save through the efforts of patient and often deep-pocketed enthusiasts. But fortunately some of these works are now being collected in anthologies. Editor Howard Andrew Jones has done the Herculean task of assembling Lamb’s stories in the eight volume “Harold Lamb Library” series by Bison Books. These include Swords from the Desert and Swords from the West, and recently concluded with Swords from the Sea and Swords from the East.

Lamb is a writer who these days has wallowed in relative obscurity and has not enjoyed the resurgence of other authors who got their start in the pulps, including Robert E. Howard and Dashiell Hammett. It’s a shame because Lamb is a terrific author. Lamb writes with a wonderfully economic, sparse style that allows him to set a scene in mere sentences and plunge you headlong into action. His stories are true page turners and easy to follow. 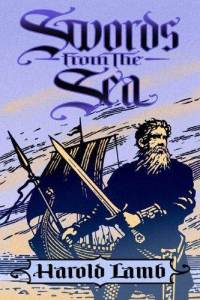 As a lifelong Viking aficionado I couldn’t help but fall in love with Swords from the Sea. While it contains stories from many historical ages, including tales of John Paul Jones and the Barbary corsairs, I concur with series editor Jones, who in an introduction to Swords of the East states that Lamb was at his best writing tales of the distant past. Lamb’s Viking stuff feels more visceral and accessible and does not feel the least bit dated.

Howard called Lamb one of his seminal influences. In a December 1932 letter to H.P. Lovecraft, Lamb is listed among those Howard refers to as his favorite writers. Lamb exhibits a clear influence on Howard. Ultimately Howard was the more artistic writer and a more unique talent, and if Lamb’s writing is lacking in any respect it’s in poetic vividness, a trait Howard possesses in abundance.

If Lamb has a true strength as a writer it’s the depth and detail of history he conveys. Lamb was a prolific historian and author of biographies on personalities like Hannibal and Gengis Khan. His tales are full of historic facts that make them as much an engaging lesson as an enthralling tale. Here’s a sample of his wonderful and informative style, from “The House of the Strongest” (Swords from the East), in which we the reader are introduced not only to the main character Ermecin but to the various peoples of the Mongolian tribes and the wicked weapons they wield:

Ermecin was the strongest of the youths. Somewhere among his fathers had been a Chukchee, of the fisherfolk from the North. And in Ermecin appeared the flat, high shoulders, the massive, swinging arms, and the small quick eyes of this ancestor. Among the Buriat men was a batyr, a proved warrior. He had fought in the wars of Muscovy. Once in an inn during a horse festival, he drew his sword on Ermecin. The boy, now nearly at his full growth, twisted the weapon from the warrior and broke the man’s neck with his hands.

The sword Ermecin kept. It was a heavy affair, a foot broad at the head. Its hilt had space for two hands. But the Buriat youth could swing it, whistling about his head, with one hand. With the bow he was more deadly, for that was his natural weapon. He could keep a bowstring of reindeer gut twanging in the air like a minstrel’s fiddle-string, while he buried a half-dozen shafts in the splintering trunk of a sapling.

It’s also worth mentioning that these volumes feature a lot of red meat (and not just in the sense of the violence and bloodshed they depict). You get your money’s worth and more in these thick volumes. Swords from the Sea is a massive 553 page tome and contains 18 stories that range from 12 pages in length (“Wolf Meat”) to two stories just north of 100 pages (“The Snow Driver” and “The Sword of Honor.”)

Swords from the East is a similarly thick 476 pages and contains 10 tales about the Mongols of Genghis Khan. For years depicted as mindless hordes of reavers, Lamb brings these peoples to life with memorable character sketches that illuminate their humanity as well as their ferocity. Some of my favorites include “The Gate in the Sky,” “The House of the Strongest,” and the 139-page mini-epic “The Three Palladins.”

In addition to presenting Lamb’s fine stories, Jones fleshes out Swords from the Sea and Swords from the East with some well-crafted introductions and some interesting supplementary material. Both volumes conclude with an appendix containing several lengthy, detailed letters to the editor written by Lamb that appeared in Adventure magazine. Swords from the Sea also includes an essay by Adventure editor Arthur Sullivan Hoffman that provides the reader with an in-depth look at Lamb’s writing process, as well as the problems he faced from closed-minded editors unwilling to print stories about Mongols and other men from the East.

Overall these anthologies are both winners and highly recommended. Reading them in large chunks straight through is not necessarily a best practice, as their one flaw is their occasional repetitiveness. I’ll admit that some of the stories and plots flowed into each other. But if you remember the context in which they were written—for those aforementioned pulp magazines, the tales arriving singly in print schedules that varied from bi-weekly to monthly—they are well-worth owning and savoring.

It’s a shame that, in our time, adventure fiction has largely given way to stories told through television and film. Lamb’s tales on the printed page can still transport us to far-away places and introduce us to larger than life personalities and events like few authors before or since. They are history brought to vivid life through the medium of short fiction.