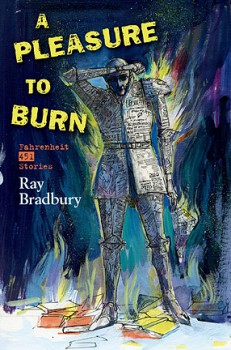 Ray Bradbury’s A Pleasure to Burn is a collection of short stories that served as the basis for one of his novels (and what few novels he has written are based on his short stories) Fahrenheit 451. This is repackaging, recycling, and rebranding old stuff (really old, as the novel appeared in 1953 and the stories date back to 1947) to make it appear fresh. Now in his ninth decade, Ray has more than earned the right to let his publishers generate some cash for him the same way the Beatles (as well as a multitude of musical groups from the era) and their heirs keep coming up with repackaged versions of the same old catalog. But, just like repeated listening to the Beatles over the decades, anything that makes you reconsider some “old” notions in a new context still has value.

If you’re not familiar with Fahrenheit 451 (and you really need to rectify that), the premise is that of a dystopia in which television is the ruling order’s opiate to keep the masses content and placid; to that end, reading is literally outlawed as disruptive to social conformity. Firemen no longer put out fires but set fires to surreptitious libraries of the banned books. The protagonist is a fireman who begins to question his purpose and eventually decides to take a look at what he’s supposed to be destroying. Needless to say, his experience in reading books proves the authorities right. Which, of course, Ray wants us to understand, is actually a good thing.

Remember, this was written in the 1950s, back before anyone could even begin to imagine something as stupefying today as The Situation and Snooki, or the anti-intellectualism of the Republican presidential field, or 150 channels and nothing much to watch. This was also the era of McCarthyism, though Bradbury always maintained his novel was not about censorship, easy as it would be to interpret it that way, but rather a critique of American culture.

In the science fiction becomes science fact department, Bradbury foresaw the iPod hordes clueless to their actual surroundings as they navigate mundane daily existence with his fictional “seashells,” small radios that fit into the ear like, well seashells.

The little mosquito-delicate dancing hum in the air, the electrical murmur of a hidden wasp snug in its special pink warm nest. The music was almost loud enough so he could follow the tune.

Without turning on the light he imagined how this room would look. His wife stretched on the bed, uncovered and cold, like a body displayed on the lid of the tomb, her eyes fixed in the ceiling by invisible threads of steel, immovable. And in her ears the little Seashells, the thimble radios tamped tight, and an electronic ocean of sound, of music and talk and music and talk coming in, coming in on the shore of her unsleeping mind. The room was indeed empty. Every night the waves came in and bore her off on their great tides of sound, floating her, wide-eyed, toward morning. There had been no night in the last two years that Mildred had not swum that sea, had not gladly gone down in it for the third time. – Fahrenheit 451

Bradbury, who dismisses the Internet as a tremendous waste of time, was reportedly horrified in encountering a woman listening to a transistor radio as proof of his fears of declining American culture. That was over 60 years ago. He had no way of knowing that one day people would define themselves by the type of personal devices they own. Worse for Ray and those of us who spent our childhoods reading him was that the fragile paper that so quickly burns is on its way to becoming pixels on a screen. Subject to viruses and operating system crashes, but no longer so delicate that it can so easily be suppressed.

And there’s the upside of technology that also makes us wish the future wasn’t here quite so soon.

The sad/scary part is these devices are of course a pandora’s box; there’s no going back now. Every time I see someone walking down the sidewalk or the office hallway with their nose buried in a crackberry, I think, “Remember the days when people used to look you in the eye and say hi, or give you their full attention at a meeting? They’re going fast.”

Brian: You said it!

He did a nice short story, found in his “Martian Chronicles” which was a tribute/re-telling of Poe’s “A Cask of Amontillado” which was more on censorship.

Actually, it was “The Fall of the House of Usher.” The censors die in various Poe related ways, one of which is being bricked up.