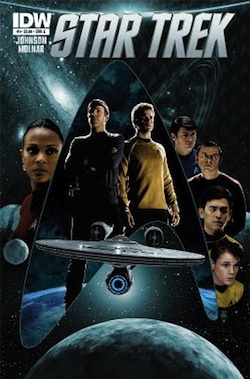 And here I had grand ambitions to write a quick post or two about some recent magazine acquisitions tonight. Instead I’m dropping all that to tell you about a comic book I’ve never even seen (and is reportedly already sold out). Blame Tor.com, where I stumbled across this story.

Now I know you saw 2009’s Star Trek reboot, staring Chris Pine and Zachary Quinto, and directed by J.J. Abrams. Whether you loved it or hated it, I’m pretty sure your mind went the same place mine did after exiting the theater: Huh. I wonder how that fresh crew of punks would handle The Doomsday Machine. Or that nasty Klingon captain Kor from “Errand of Mercy.” Is that Quinto guy even old enough to grow a beard for  a “Mirror Mirror” remake?

We’ll have to wait until at least 2012 to see how (or even if) J.J. Abrams chooses to answer those questions in the coming sequel. But now IDW, the company behind the excellent Star Trek: Year Four comic series, has teamed up with Star Trek writer/producer Roberto Orci to launch a new comic that explores those very questions.

The adventures of the Starship Enterprise continue with the new cast from the film as they embark on missions that re-imagine select stories from the original television series, along with new threats and characters never seen before.

Under the creative direction of Orci, fan-favorite Star Trek writer Mike Johnson and artist Stephen Molnar bring this alternate universe to life and begin the countdown to the highly anticipated Star Trek sequel. The series kicks off with a dramatic new envisioning of The Original Series second pilot, “Where No Man Has Gone Before.” The conclusion of this reimagined episode will be available in October. In November, the adventures of the new Enterprise crew continue with a new take on the classic episode “The Galileo 7,” as Mr. Spock finds himself in command of a stranded shuttle crew fighting for survival.

Yeah, that sounds pretty damn cool.  IDW has already announced that a second printing, with a variant cover, will be available soon. Worth a trip to the comic shop, anyway. I’ll be the guy in line in front of you, haggling for a free mylar bag.