Living in the Third Place Between Me and You

We’ve all been there: for some reason you lose your web connection. All of a sudden, it’s like you’ve lost a limb. You wander around, listless, anxious, this terrible nagging feeling of being cut off from the world. It happened to me last month: for two whole days (days!) my modem died, and I wrestled frantically with technicians checking phone lines and digging round my house as my cyberself entered intensive care. 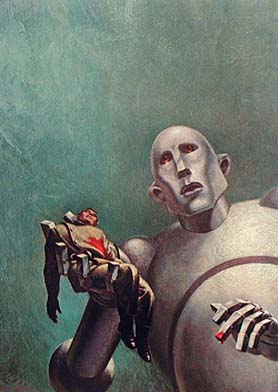 As I mooned around in doomed isolation, it occurred to me that my plight – comprehensible to the vast majority of people reading this – would be a complete mystery to my parents’ generation (with apologies to adventurous silver-surfers out there) – who’d grown and matured before the internet came to stay. I had a vision of a world with two types of people: those who enjoyed the comforting buzz of eternal information streams sliding effortlessly through the backs of their minds, ready to bathe in at any moment; and those for whom information was something static, hard, and external – something to be looked up in a book, or researched with painful diligence. Both staring at one another across an invisible chasm with utter incomprehension.

My dictionary (online, naturally) defines “cyborg” as “a human who has certain physiological processes aided or controlled by mechanical or electronic devices”. Setting aside dependencies on televisions, games consoles, and certain brands of coffee machines, recent studies do seem to be suggesting there’s now a qualitative difference in the thought processes and possibly even brain structures of those of us who’ve spent years happily plugged into the vast ocean of freely available information on the worldwide web. I don’t just mean plugged in 24/7 – this isn’t some secret of the anorak illuminati. Not at all – look around on any bus or train, any bar, café, restaurant, at any time of day or night, at the constant dataflow of texting and twittering and facebooking zipping around the globe. Or ask yourself – how many of us buy encyclopedias any more? Or write letters, rather than a quick email? What’s our reaction when we find a question we can’t answer – do we throw up our arms, go buy a book? Or do we simply surf a while, till the information we need appears?

The cables which connect us may not be sticking out the backs of our heads, nor do we have neural transmitters in our skulls, but make no mistake – our perception of culture, society, shared experience, even individual consciousness, is changing, profoundly. No longer do we exist simply in the physical space our bodies occupy – but also, via that little screen in front of you now, in a Third Place, somewhere between me and you, here and there, an imaginary space where we’re in constant and intimate contact with the minds of friends and strangers all around the globe. Travelling… without moving.

But how do we decide the way we cyborg ourselves to this virtual Third Place? Shouldn’t something so important as the future of our consciousnesses, educations, and societies be addressed with some debate, some rational thought, or at least a modicum of attention? Looking around me today, it appears not – right now I find myself in a multifaceted rough-and-tumble with every aspect of cyberspace, every new invention, gadget, or program promising to hook us up to one another and the information sphere in new and exciting ways. The media either scream for or against, singing the web’s praises or blaming it for everything from dyslexia to terrorism, like some schizophrenic yes-man in a captains of industry convention. It’s social evolution at its rawest – a push and pull of ideas, opinions, voices, competing for attention and prominence. The result, of course, is cacophony, which in itself can be stimulating and innovative, at least for a while. But as the second generation of the web starts to morph into the third, I can’t help wondering if we shouldn’t be talking to one another about just what sorts of cyborgs we really want to be. As cable TV has so wonderfully proved, more is not necessarily better, and “the Web” is the biggest source of “More” there is…

And then there’s the dark side. No matter how you dress it up, this isn’t some utopian dream, some relentless march into a beaming and optimistic future where everyone wins. Not unless we do something about it. Bluntly, it’s a new and perhaps best-ever creator of privilege and social division – vast tracts of the world have no access to the Net, nor do vast numbers of the poor and the disenfranchised. Governments are even muttering about withdrawing web privileges as a punishment for often ill-defined “cyber-crime”. Never mind our concerns about a two-tier society, a battle is raging in cyberspace between the haves and have-nots, between the centripetal forces of big business and the new corporatists, who want to pin down our cybernetic futures and make them into products and commodities which we rent by the hour, and the centrifugal forces of liberty and human interaction in which we constantly seek to reinvent ourselves, to find new ways to talk, to think, to express ourselves.

We shouldn’t underestimate the stakes in this. When the printing press was invented, the Church wondered whether it should try to control the new technology, a potential creator of subversion, heresy, and rampant free thought. Happily, they failed. But there are already similar forces in action today, trying to restrict, censor, control, and the immediate future, at least, of our hearts and minds is the prize.

Time maybe for us all to get cyborged. Game on.

[…] resume. John Scalzi on A World Without “Star Wars”: What Would It Be? Black Gate (Sarah Newton) on I, Cyborg. Black Gate (Scott Taylor) on Art of the Genre: Concepts of a Fallen Vanguard. The King of […]