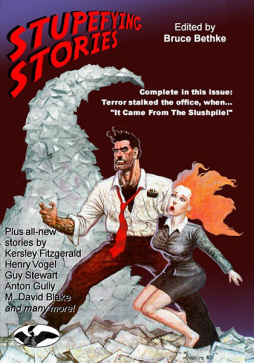 Since the estimable editors at Black Gate have managed to attract such a crowd of high-quality submissions that the soonest a newly submitted story can reasonably expect to be published is sometime around Issue 47 in the year 2026, I thought it might be of interest to the various writers who follow this blog to know about an alternative that pays less and is presently less prestigious, but has a more pressing need for publishable material. I should mention that I have no connection with the publication except for the appearance of one of my short stories in the second issue. Here is the publisher’s statement:

The original vision for Stupefying Stories was that we were going to put together a series of quarterly, print-oriented, “theme” anthologies, and then, in about a year’s time, when we felt we had all the bugs worked out of our processes, we were hoping to be in position to cut over to doing a monthly e-book only magazine. We’ve since had cause to reevaluate our plans, and have concluded there’s nothing to be gained by waiting.

Therefore, effective immediately, Stupefying Stories is going to a monthly release schedule, switching to a direct-to-ebook only format, dropping the concept of “theme” anthologies, and dropping all plans to do a print version. Also effective immediately (and retroactively, for our original contributors—thank you!), we are raising our base word rate to 1-cent/word. I would much rather put the money into the people who write the words than the dead trees upon which those words are printed.

If you’re interested, you can find the submission details for Stupefying Stories at the Original Cyberpunk’s place.