Pixar has maintained such an amazing line of success with their mixture of intelligent adult themes and child-pleasing action and characters in their CGI films, that the studio’s turn toward sequels hit me in the face with the great massive gauntlet of disappointment. I did enjoy Toy Story 3, but it was nowhere near the level of brilliance of my trifecta of Pixar favorites: The Incredibles, WALL·E, and Up. And when I found out that the follow-up for Toy Story 3 would be a sequel to Cars, easily my least favorite Pixar film so far, the massive gauntlet of disappointed almost pounded me head-first down into the soil.

Cars 2 is the first Pixar film ever to have critics turn against it. The Rotten Tomatoes review aggregator has given the movie a “Rotten” rating, currently holding at a morose 33% positive, a sad first in Pixar’s history. It seems the best I’ve heard about the movie from viewers is, “Eh, my kids liked it.” Considering the steep prices for the 3D screenings — which are the only screenings available at my local theater — this may end up being the first Pixar movie I skip in theaters, and wait for the Blu-ray.

There is one temptation, the trailer for Pixar’s next films, a non-sequel heroic fantasy set in Scotland: Brave.

But now the trailer is on line, so never mind. This looks not only like a return to form for the company, but a step into territory they’ve never explored. In particular, this is the fairy tale and fantasy world that we often associate with the classic Disney films of the Golden Age. But Pixar’s take looks sharper and harder than that, although I only have this trailer, plus posters and artwork to go on. But the mystic and Celtic, adult fantasy feel of this trailer is breathtaking — I can hardly wait to see what the company does with this setting and its fiery red-haired heroine. There will be comedy, but as director Mark Andrews told Entertainment Weekly, expect something fitting the bold declaration of its title: “What we want to get across is that this story has some darker elements. Not to frighten off our Pixar fans — we’ll still have all the comedy and the great characters. But we get a little bit more intense here.”

And it does appear intense. That final bow-shot to the camera? Sign me up!

If you want something else to hold you over, Entertainment Weekly has some beautiful concept art. 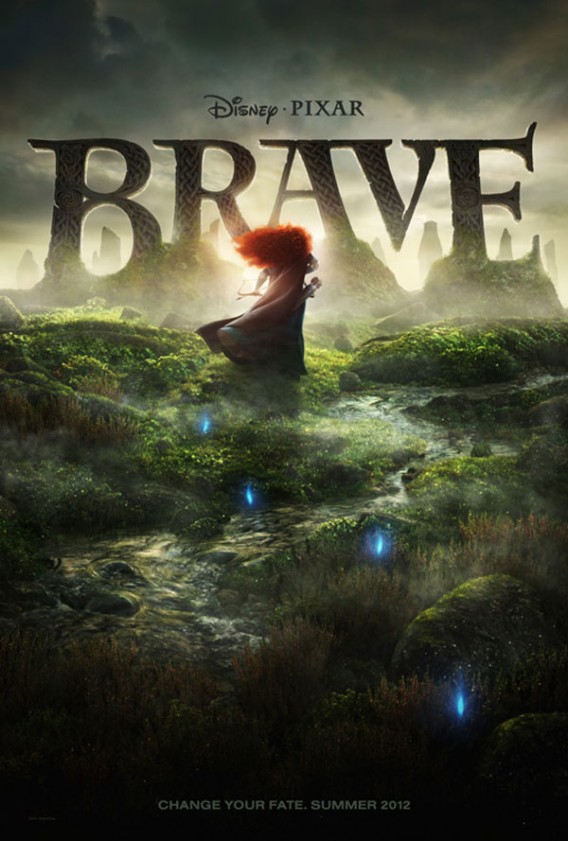 Yeah, the original Cars didn’t do a lot for me, so I kind of ignored Cars 2 before even knowing anything about it (and knowing as not now made me alter my attitude!). But, yeah, Brave looks very cool. 🙂 Is it just me, or is there an almost self-consciously Hayao-Miyazaki-ish vibe here? (And that would be no bad thing, IMO.)

PS – The Incredibles, WALL·E, and Up: yes, of course. What about Monsters, Inc? A bit long in the tooth now, perhaps, but I still think it’s great. 🙂

I’ve loved Pixar’s stuff since before they were doing feature films, when they were just a bunch of experimental guys in Lucasfilm’s stable sending the occasional short film to animation festivals. That said, Cars did not do much for me.

My favorite animated feature of all the ones I’ve seen this year is actually some years old, but it’s been turning up in the remaindered section on deep discount in chain bookstores and Target and various other unlikely places. The Secret of Kells is a visually stunning, beautifully written film that uses old-school cel animation techniques, but recently enough that it’s a very deliberate choice. They could have gone with CGI, but wanted a film that felt like an illuminated manuscript brought to life. If you can still find it in your local remainder bin, it’s well worth picking up.

I love Monsters Inc., but I guess it just gets slightly nudged out by the others in my “personal canon.” At the time it came out, I certainly thought it was the best work Pixar had done. I could still sit down and watch my Blu-ray of it anytime.

The original Cars, I think it’s pretty good. But in the Pixar luminous galaxy, being a “sort of bright” star isn’t enough.

I love that I am agreeing with both the article and the comments.

I only own three Pixar films, and they are The Incredibles, Wall-E and Up. They are my favorites, and I enjoy watching any of them with my kids.

I have no desire to see Cars 2.

The Secret of Kells was amazing. I watched it earlier this year. Though it was a little too dark for my little kids, and I wonder if Brave may be as well.

An interesting note: the first movie I ever watched on Blu-ray when I got my player and HDTV was WALL·E. There’s no better hi-def image to begin with than the dive through the stars and into the massive mountains of compacted garbage, where every piece of junk is meticulously detailed. The amount of work the Pixar people put into their visuals is astonishing.