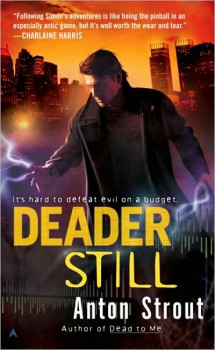 Good news for fans of urban fantasy detective stories: Anton Strout hits one well into the bleachers with his sophomore publishing effort. Deader Still is the worthy follow on to last year’s Dead To Me. Strout is writing a first-person paranormal gumshoe saga about investigator Simon Canderous, a baseball bat-swinging sleuth. Simon works for the city government’s Department of Extraordinary Affairs, an underfunded law enforcement organization. Think Bill Murray’s college-basement departmental digs in Ghostbusters without the glamour. And the rest of officialdom feels much the same way about the Department as Murray’s outraged Dean. They’re on a shoestring budget for everything but paperwork.

Simon is a mix of beefy, quirky, and a little intense that makes me think of a young Jon Voight. He makes a nice pivot for the other characters in the series. There is more to Simon than his trusty baseball bat. He is a user of psychometry, able to get a read off an object and some idea of what was on the mind of the last person to handle it. This is fun for readers and impresses me as an author. One of the big problems with writing first person (or third person limited to a single character) is getting glimpses of other characters’ inner lives. Simon’s reading of objects nicely bridges the gap between points of view and the author in me finds the device brilliant. Ordinary readers will simply find it fun and interesting. I thought some of the best parts of the first book were Simon’s readings of objects, and that trend holds true for the sequel.

This time out his department is dealing with a purposeful zombie outbreak in New York, not the least of which is explaining the chaos without unduly alarming the citizens. Complicating matters is a troubled relationship with Jane, his would-be girlfriend, sometime savior, and technomancer in training. She is on the run from a dark past, but isn’t quite sure Simon is what she should be running to. Simon’s old girlfriend Mina shows up at the right place but the wrong time with grand larceny on her mind.

If the novel has a flaw it is in the pacing. Strout keeps the action up at the ‘frappe’ setting through much of the book. The constant action gets exhausting at times, though it was fun imagining the street outside the Guggenheim filled with the living dead. While Strout isn’t blazing any new trails in the genre, he is more than capable of pounding some new life into a crowded field with Simon’s baseball bat. Deader Still should impress fans of hard-boiled paranormals, readers who like appealing ensembles of characters sparking as they work out their problems, and action buffs who like an author who keeps it gritty and two-fisted. If you enjoy Jim Butcher’s Harry Dresden books, give Simon Canderous a try.