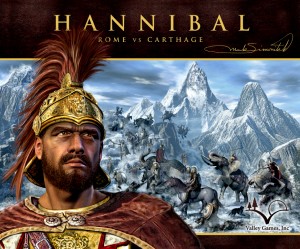 My regular gaming partner and I completed our first game of Hannibal: Rome versus Carthage this week and it was an educational experience in the evolution of wargaming. Although I’ve played many wargames over the years, Hannibal marked the first time I played a card-driven design of the sort first introduced by Mark Herman in We The People, a game of the American Revolution published in 1994.

My interest in the card-driven approach was piqued by the fact that an artist and I have recently been toying with the idea of designing a wargame around the fantasy world of Selenoth, which is the setting of my novel Summa Elvetica. We’d already started on a map, mostly to help place events in the follow-up novel that I’ve been writing, when the idea of using it for a Vassal-based wargame occurred to him. While I’d originally planned on using a zone mechanism of the sort utilized for the Avalon Hill classics War at Sea and Victory in the Pacific, (both WWII naval games, but with a mechanic well-suited for the repetitive sort of seasonal campaigning I’d envisioned, playing Hannibal made me think that the card-driven approach was an intriguing alternative. So, as we played out the Second Punic War, I noted some of the strengths and weaknesses of that approach.

First, there is no question that the CDG approach is extraordinarily well-suited for a historical or pseudo-historical game. The cards permit highly specified events, even singular ones, to take place. In a reasonably content-rich world such as Selenoth, this is highly desirable and would likely tie-in nicely with the novels and the short stories.

Second, it allows for a move away from the conventional hexes that intimidate many gamers and tend to limit movement to the classic, but arguably hoary Zone Of Control model.

Third, the cards are attractive, and tactile, and permit more of the artwork that helps draw gamers into the game experience.

But there are weaknesses and challenges too.

First, card-driven games are less extensible than classic hex-based games. Whereas it’s fairly simple to add new boards, new counters, and sometimes even new scenarios that can be connected to the previous game – for example, the ASL monster historical module Red Barricades was “extended” 18 years later by the equally monstrous Valor of the Guards, (both games feature two 22″x32″ maps) – it is impossible to add a sequel to a card-driven game that is meaningful in any sense beyond the storyline.

In other words, the CDG-approach is ideal for one-offs, but less suitable for a game series. The second weakness is that card-based combat does not permit for much tactical sophistication. 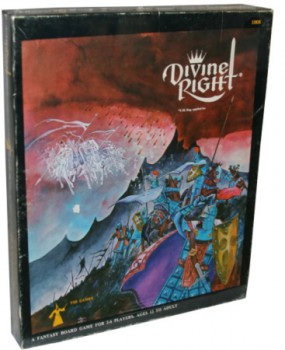 While it would certainly be possible to utilize cards in a manner more remniscent of Battleground or Magic: The Gathering than the effective, but extremely simple pair-matching approach of Hannibal, (whoever can’t match a troop movement loses), doing so would amount to essentially designing two separate games in one.

Third, cards add significantly to the printing cost, although in this case that’s not a problem since the game will be designed for VASSAL from the start.

And fourth, a reliance on card events places intrinsic limits on the players’ freedom. This is not necessarily a negative thing, as the massive success of “roller-coaster” 3D shooters has proven, but is still a factor that needs to be taken into account.

I haven’t decided which way to go yet, although I’m presently setting up to play Divine Right, which is arguably still the best and richest fantasy-related hex-based wargame available. Obviously, more intensive research will be required.