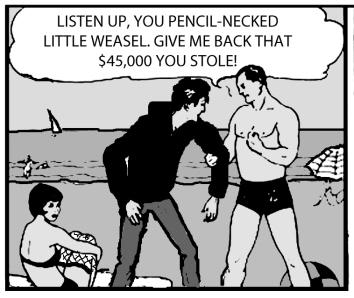 So by now you’ve probably heard that Minnesota Republican and House of Representatives Majority Leader Matt Dean on Tuesday called Neil Gaiman a “pencil-necked little weasel who stole $45,000 from the state of Minnesota.”

Why the extraordinary rhetoric against one of the most respected fantasy authors on the planet? Dean is upset that Gaiman accepted money from a Legacy Fund to speak at a public library in Stillwater, Minnesota, in April, 2010. Gaiman was paid $45,000, which he donated to charity last year.

Dean said Gaiman, “who I hate,” was legally within his rights to take the money, but found the payment “infuriating,” and wanted Gaiman to return it.

It’s kind of nice to make someone’s Hate List. It reminds me of Nixon’s Enemies List. If a man is known by his enemies, I think my stock just went up a little… I like “pencil-necked weasel”. It has “pencil” in it. Pencils are good things. You can draw or write things with pencils. I think it’s what you call someone when you’re worried that using a long word like “intellectual” may have too many syllables.

The story only gets weirder from there. It was picked up by Wired, The New York Times, and other news outlets, and when Gaiman tweeted about the controversy, linking to Dean’s blog, traffic from Gaiman’s fans brought down the entire site. On May 5th Dean reported that his mother, upset with him for name-calling, forced him to apologize. “She was very angry this morning and always taught me not to be a name caller,” he said. “And I shouldn’t have done it, and I apologize.”

Predictably, Gaiman’s fans have begun to mock Dean in numerous forums online.  So far my favorite is the Charles Atlas-inspired comic at Evil Reads. Click the panel above right to see the entire strip.

Arrgh! You may have ninja’ed me, but I have the full story, including FACTS and PICTURES!
http://mythopoeicrambling.blogspot.com/2011/05/mythopoeic-news-flash-this-just-in-neil.html

Typical obfuscation from Mr. Gaiman. NB “pencil-necked weasel” and “intellectual” have the same number of syllables in it. It’s also well-known that weasels, while attracted to wealth, are math-challenged.

Thanks for the, ah, correction.

Good luck getting Gaiman for that interview.

What’s funny about this is about ten years ago I got into Gaiman…American Gods and all that.

Well I had a handful of relatives and or school mates call Gaiman whom was depicted somewhere on a book I was reading…’Pencil-necked.’

Any ways I call the Sin of Covetousness.

I mean that this politician probably just found out that day how much money a writer ( whom doesn’t have a ‘real job’ any ways ) can make from bullshitting about his favourite pudding at a public library.

Political dude probably thought only his class at 12th level could do that.

Turns out writers get to do that starting at 9th level.

Some people get weird when they find out that writers tend to get paid for almost everything they speak/write and it doesn’t always come cheap.