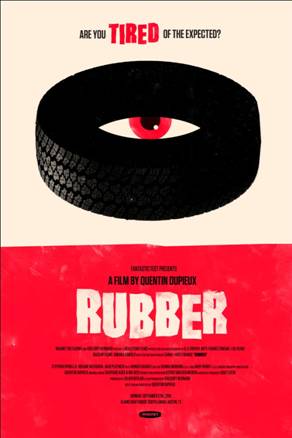 At this point I’m fairly unflappable and difficult to impress.

It’s to be expected when, until 2009, Googling “goth chick” lead you straight to several pages of sites that at best required you to swear you were over 18, and at worse required a credit card.

However, once in awhile I get an email that makes even me wonder WTF?

And those, my friends, are rare and wonderful moments indeed; like the one earlier this week I received an email containing an ad for a soon-to-be-released indy film called Rubber.

Granted, at first this correspondence nearly got flushed, being understandably mistaken for yet another solicitation of an “adult” nature. But luckily, fueled by the third triple-shot latte of the morning, and bored to sobs being in between batches of interns to abuse, I decided to roll the email-virus-dice and open it.

The first line of the email read as follows,

Rubber is a good movie about a killer tire. Take a moment and let that sink in. 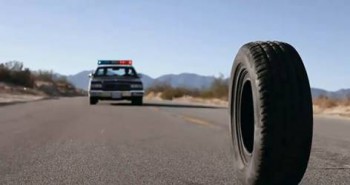 Fair enough. Taking a nice long draw of triple latte, I let it sink in. Still interested and no longer bored, I read on.

Apparently, there’s this French musician going by the moniker Mr. Oizo who is fairly well known on the European club circuit for his electro-house mixes. He’s cut several albums, collaborated with some high-visibility artists and DJs, and generally has a robust underground following, at least here in the states.

By day Mr. Oizo’s real name is Quentin Dupieux and whether or not you believe this name is also fake, being a tribute to his grindhouse idol Quentin Tarantino, he is widely acknowledged as being a rather astute visual artist, primarily in photography.

However, that didn’t stop Quentin from trying his hand at moving picture, having worked on several music videos including a couple for his own songs.

Back in 2007 Quentin got enough money together to write, direct and release his first indy film entitled Steak. Though I could find precious little about the movie, I did discover it’s a high-school-losers-want-to-be-cool-kids flick that has succinctly divided its viewers into two categories; love it or hate it with very little opinion between the two.

Then again, the film is in French and was only released in France and Canada so draw your own conclusions.

Whatever opinion the viewing public came down on, it was the extreme reaction on both sides of the spectrum that did the trick (remember, there’s no such thing as bad publicity) and Quentin got what every first-time filmmaker wants; funding to do a second film.

So here we are at Rubber.

The premise involves a living car tire named Robert that rolls around killing people with the psychokinetic powers of its tire mind. Robert kills by causing his victim’s heads to explode and he’s apparently on a cross-country rampage searching for a mysterious woman he is obsessed with.

From an artsy standpoint the look of Rubber, from the stills to the poster, is reminiscent of the “grindhouse” movies of the 1960’s complete with the low camera angles, the gratuitous violence and the questionable production values.

But then you stop being pretentious and remember it’s a movie about a tire.

I did read one assessment of Rubber that stated Robert the Tire was a better actor than Nicolas Cage (who is appearing in another newly released, car-based flick, Drive Angry), but I thought that was a bit harsh.

Rubber made the film festival rounds in 2010 and apparently garnered quite a bit of buzz at Cannes, AFI and Fantastic Fest. It hit your On Demand menu in select markets last week and is schedules to go into theaters across the country in April. 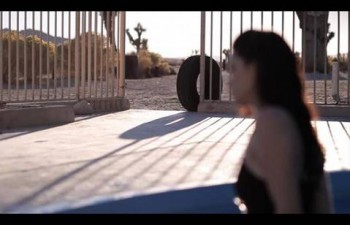 Not only is this just about the most bizarre thing I’ve ever heard, but Rubber looks so incredibly ridiculous that it may border on genius. I’m already blocking time this weekend to watch it, probably more than once. Being a fan of indy films and having the privilege of screening a lot of them, it’s much more usual to see serious plots badly executed, rather than absurd plots decently executed.

Click here to see for yourself or get the full dose of weird by visiting the official move web site here.

If this is the level of creativity we can expect from indy flicks in 2011, we can safely predict it’s going to be a Goodyear.

OK, I borrowed that joke but when you come across a perfect close like that, you go with it. Are you going to seek out Rubber, or do you have a favorite, low-budget movie? Just have something strange you want to say? Post a comment here or drop a line to sue@blackgate.com.

I love the trailer. Say what you want about it, this movie looks funny and blindingly original. Any idea if it will be in theatres, or is it strictly available via download?

Rubber is scheduled to be widely released in theaters in April. Sadly, no confirmation it will hit any IMAX screens.