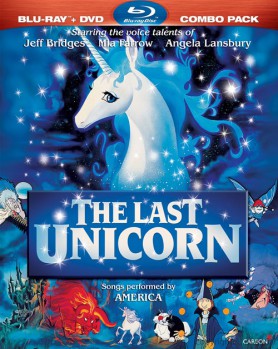 Today is the street date for the Blu-ray release of The Last Unicorn, the 1982 Rankin/Bass-ITC Entertainment animated film version of Peter S. Beagle’s classic 1968 fantasy novel, for which Beagle also wrote the screenplay. After a poor-quality DVD release in 2004, which came from inadequate masters and was presented pan & scan, Lionsgate Entertainment released an excellent two-disc DVD in 2007 as a 25th Anniversary Edition. Now that version is making the leap to 1080 lines of resolution for the new generation of Hi-Def presentation.

But, if you plan on purchasing either the new Blu-ray disc (which includes a DVD copy) or the still available two-disc DVD, please buy them through Conlan Press, the company owned by Connor Cochran, Peter Beagle’s business manager.

Why? As Conlan Press explains on the page for the 25th Anniversary DVD:

Except for the copies that were purchased through Conlan Press via this website, or at Peter’s sales table at various conventions, none of the other Last Unicorn DVDs have ever paid him a cent. That’s right — at least 1.5 million DVDs have been sold around the world since 1999, and only the 4,000 copies sold here have earned him any money. From all the rest, Peter has gotten absolutely nothing.

The reason for this situation is a long legal tangle between Beagle and Granada International, the British company that currently owns the rights to The Last Unicorn, over non-payment of royalties from the movie and its ancillaries. A vocal outcry from fans across the world pushed Granada International into talks with Beagle and Conlan Press to resolve the situation. However, like many legal snares in the entertainment world, the progress is slow. Conlan Press reported in 2008:

There is a possible solution on the table, but it isn’t an easy one to pull together. In fact, it is really, really difficult, as witness the fact that we’ve spent more than a year on it so far without making any clear headway. And we can’t talk about it publicly without jeopardizing any hope of progress. So please be patient with us — we’ll post the news (either pro or con) just as soon as there is something definite.

But for the time being, there is a way for Mr. Beagle to receive compensation from some of the sales of The Last Unicorn on home video. Lionsgate Entertainment allowed Conlan Press in 2007 to sell copies of the DVD through their website, with over half the money from each sale going to Peter S. Beagle. As of mid-2009, over 4,000 copies of the DVD have sold through Conlan Press. A nice number . . . but only a fraction of the 800,000 sold through other outlets in the same time period.

When I heard about the upcoming release of The Last Unicorn on Blu-ray, I wrote to Conlan to ask if they would also sell the new format with the same benefit to the author. I received a response that they would, and it is already available for order on the website—although they don’t have their copies as of yet.

The Last Unicorn is one of my favorite fantasy novels, and the movie version looms large from my childhood. I haven’t owned any of the previous home video versions, so I am thrilled to get the chance to see it presented in the Blu-ray format and support Mr. Beagle at the same time.

It’s also one of the best examples of the Rankin & Bass productions. When I get it, I’ll get it through Conlan Press.

This is another reason I’m against these big companies. Except when claiming otherwise when they scream for government subsidies, or sue people who somehow like their PC drek enough to download it, they do NOT help “The writer/the creative process” at all. They chew people up and spit them out. They take good things, file off all the rough edges and excrete them on the public in markets they monopolize. They keep out, put down, block, even try to make illegal anything with any real spirit in it.

Look no further than “Conan the Barbarian”. That was one of the perfect movies, still talked about today. Some REH fans don’t like it cause it was more of a tribute than a direct adaptation, but the movie’s strengths made up for it’s weaknesses. I saw it in the big theater as a wee lad:-)

It was immensely popular, it inspired many future works, tributes in other film/comics/books. The music alone boosted the concept of “Showtunes” since people gladly bought the record with the movie’s soundtrack. It’s even being ref’d today, like this cool YouTube video http://www.youtube.com/watch?v=y5KBrP-pB1A that shows some neat parallels to the movie with the Reptilian controllers if you follow “Conspiracy Theory”. Who knows, it might be true, considering what followed…

So, with all that $ from something that had been “Throw money at sword and sorcery genre now that it is popular, expect mild returns” they made a sequel; “Conan the Destroyer” which used a rather mild SSOC plot and dumbed everything down. Still an enjoyable movie, but nothing compared to the first one. They didn’t make any more Conan movies, except Red Sonja who had Arnie (but not as Conan) and obviously they made him second to a WOMAN… I even dread further there’s a “Conan” movie in the works that supposed to be lamer than Soboro’s “Kull” and essentially a “Destructive Prequel” like the latest Star Trek movie.

The Mass Media, the Big Corporations are allergic to anything truly good. When they find something they buy it out and destroy it. They try to dominate markets and keep out good stuff or if they feel they must include them they make them mediocre.

From what I understand, they really hacked away the plot of the Last Unicorn, cutting a LOT to save a little time. I’ve never followed that book, but even the comics adaptation is a lot better than the movie, and it could have been included so simply. The movie was very good even having said that, but imagine if it had been that much better…

[…] dog 13 Crystal. I wanted a dog that will be easier to train, not dominant and loyal and know the beagle and pug are. Just and helpful coment or suggestion/info on the puggle […]

this announcement is making hundreds of people being cheated and lose money from their credit card. Please remove or tell people that information is false. I myself never got what I bought and Conrad never answered me on my purchases.I was robbed and you guys helping the conrad to do so.

Another thing the Conrad have nothing with Peter S. Beagle.

Thanks for the comments, and sharing your problems with Conlan Press.

This article here at Black Gate is nearly five years old, and has received very little traffic in 2015, so I rather doubt it is “making hundreds of people being cheated and lose money.”

In the meantime, it serves as an important record of Beagle’s business dealings with Conlan Press, which have been in the news recently as a result of an ongoing dispute between Beagle and Connor Cochran, his business manager. This is the only article at Black Gate that explains that relationship in any detail, and it has proven useful to many of our readers (including me) doing research on the matter.

I hope you get your issues with Conlan Press sorted out soon. Good luck!