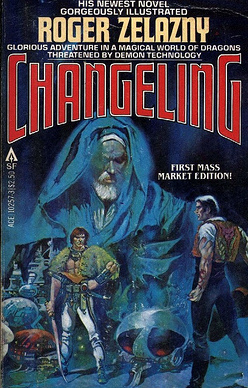 I don’t know how the idea got started, but I’ve seen a number of books where magic is seen as a force fundamentally opposed to technology.  It doesn’t always make sense to me, since “technology” is an extremely diverse thing, but it makes for some good stories — not to mention a decent limitation for characterrs who would otherwise become much too powerful.  Changeling, by Roger Zelazny, is built on this concept.

The story starts with the defeat and death of a sorcerer called Det, Lord of Rondoval.  The conquering forces seriously consider killing his infant son as well, but they find another solution.

Thousands of years ago, the world split into two seperate dimensions, one ruled by magic, the other by technology.  If the baby were sent to the technological dimension, his sorcerous potential wouldn’t endanger anyone.

Of course, something else living would have to be brought back from that world to maintain the balance.

Possibly I don’t understand the magic system, but I was never quite clear why the people planning this whole thing didn’t plan to grab a rabbit or some other animal to exchange for the infant.  It’s possible that they couldn’t find one; the technological world is portrayed as heavily urbanized.  Still, even before the wizard Mor sets out to make the exchange, everyone takes for granted that they’ll have to switch Det’s son with another baby. 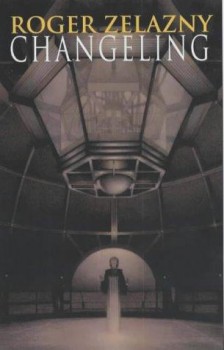 For a while, the story proceeds at a fairly slow pace, watching the two children grow up in their adopted worlds.  Dan, who later adopts his original name of Pol Detson, has a dismaying tendency to short out machinery, but he’s a good musician and can manage some environmental manipulation with his magic, although no one seems to notice it.  Mark Marakson, the boy brought back to the magical universe, seems to have a gift for technological innovation, creating toy waterwheels and clockwork horses.  Then, as a young man, Mark manages to put together a full-blown steam engine — and gets driven from his home village for the use of forbidden arts.

In many ways, I find Mark’s story more compelling than Pol’s.  There are plenty of books about wizards and magical people trying to make it in a technological world like ours, but not as many which reverse the idea.

Mark begins as quite a sympathetic character, exiled unfairly, but everything gets more complex as he journeys into the desert to find his purpose and comes upon advanced technology — technology which is as sinister and wrong, in the magical world, as the most dangerous lost tome.  Mark can’t help but be drawn to it, and he can’t help but make use of it, so Mor has to cross worlds again and bring back the one person who might be able to stop Mark, by reason or by force: Pol Detson.

At times, I felt that the characters in this story seemed curiously emotionless.  Pol, for instance, adjusted to a literal change in his world with almost no protest.  If you read this book expecting a fast-paced adventure or extensive emotional drama, you’ll probably be disappointed.  If you’re looking for description, for words that paint a picture, Changeling is excellent.  I think whether you enjoy this book ultimately comes down to whether you enjoy Zelazny’s style.

Ewmotional balance is part of Pol Detson’s magic: he is Wise.

‘Madwand’ is really good too.

Huh. I didn’t know I’ve read two Zelazny novels (Jack of Shadows being the other).

I probably read both novels in the early ’80s. Any idea what the other one might be? Does Pol wake a dragon in Changeling?