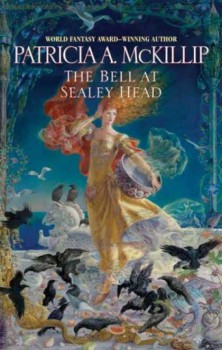 I think of Patricia McKillip a little like I think of Van Morrison. Which is really not a terribly useful comparison, because I don’t mean it to apply to their respective styles… rather, I mean to say that McKillip is one of those writers who reliably issues a novel every year or two, always enjoyable work. In the same way I look for a new Van Morrison album every year or two, and they are always satisfying.

Now it can also be said the McKillip’s novels, as with Morrison’s latter period works, are fairly small scale affairs, and while they show a certain range and a willingness to try different things, they aren’t groundbreaking masterpieces, either. (But as McKillip had the Riddle Master books early in her career, and the utterly gorgeous Winter Rose somewhat later, so Morrison has Astral Weeks and Veedon Fleece. Though here the comparison rather breaks down, because fine as The Riddle Master of Hed is, it’s no Astral Weeks. Which is hardly an insult – Astral Weeks being arguably the greatest album ever to come out of the pop/rock idiom.)

But I’m getting a bit silly and off track. As I implied, the latter day McKillip novels are not earthshaking. But they are still lovely, and sweet, and involving. Sometimes there are no villains at all, and even when there is a villain (as with The Bell at Sealey Head) he is not very much the focus (and he has at least one redeeming quality).

The Bell at Sealey Head features three viewpoint characters. Judd Cauley is the innkeeper for the Inn at Sealey Head, a place that has seen better times. His aged father is blind, and Judd barely keeps the inn going while caring for him and coping with his old retainers, particular the cook, who is quite awful. Meanwhile Gwyneth Blair is the bookish daughter of Sealey Head’s leading merchant. Her mother is dead, so she keeps tabs on her younger siblings – adolescent twins and a toddler – with the not-always welcome help of her Aunt, while spending what spare time she has writing stories. And Emma is a maid at Aislinn House, the seat of the dying Lady Eglantyne. Emma’s mother is a wood witch named Hester. But Emma’s real secret is Ysabo, a young woman she sees through various doors in the house. Ysabo seems to live in an alternate Aislinn House, occupied by her mother and grandmother and a crowd of knights, all obsessed by rigid ritual.

We quickly learn that Judd is sweet on Gwyneth, and that Gwyneth returns his affection, though neither really knows how the other feels. Gwyneth’s Aunt is determined to match her with Raven Sproule, scion of the local gentry, and Raven’s sister Daria is also in favor of the match. Emma’s household awaits the arrival of Lady Eglantyne’s heir, Miranda Beryl. And Ysabo is being forced into marriage with one of the knights, whose name she doesn’t even know. Then Judd gets a rare guest – Ridley Dow, a young scholar from the big city of Landringham, who is interested in magic, and in particular in the mysterious bell that rings at Sealey Head every sunset. Legend has it the bell was on a ship that sunk off the Head, but Ridley has other ideas, ideas that involve Aislinn House. And now Miranda Beryl is finally coming to her Aunt’s house, with a pile of idle Landringham friends, many of whom will stay at the inn, which means Judd needs a better cook…

And so the real action begins. Which I don’t propose to further summarize. Of course we will learn Ysabo’s secret, and that of her version of Aislinn House. And we get to read Gwyneth’s newest story, which concerns the Bell. And the lives of Gwyneth and Judd and Raven and Daria and Emma and Ysabo and Miranda and Ridley all change, mostly for the better…

So what do we have? A very sweetly enjoyable book. A pleasure to read through and through. Not to oversell it – it is nothing earthshaking, it is nothing really terribly new, it won’t convince people who haven’t much cared for McKillip’s work to date to convert any more than, say, Hymns to the Silence likely caused any huge swell of support for Van Morrison. But not to undersell it either – as ever with McKillip, the prose is elegant, limpid, lovely – if not as astonishing as in for example the incomparable Winter Rose; the characters, if perhaps a bit domesticated, remain quite real; and there are some nice fantastical ideas, particularly the otherworldly Aislinn House and its strangled routine.