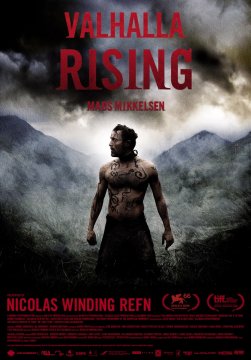 Danish director Nicolas Winding Refn went into his film Valhalla Rising right as he was wrapping up post-production on Bronson, the bizarre biopic about British prisoner Charlie Bronson that turned into his biggest success and pushed star Tom Hardy into the front lines. But Bronson surprised many viewers, going against expectations of what a biopic about Charlie Bronson would be like. In the same way, Valhalla Rising flips around the conceptual idea of “Viking movie” and is unlike anything viewers might expect from an historical epic about skull-crushers like the medieval Norsemen. Valhalla Rising had its festival premiere in 2009 and a theatrical release in mid-2010, but it sits defiantly outside the mainstream. If El Topo is an “Acid Western,” then consider Valhalla Rising an “Acid Viking Movie.”

Although it clocks in at a lean 92 minutes with credits, Refn’s film moves at a slow pace and contains vast silences within a harsh landscape. The first twelve minutes contain only a single line of dialogue, and this sparse style remains consistent throughout the running time. Red-hued violence occasionally breaks out, done with no modern stylization, but there are no “action set-pieces.” This is a movie concerned with its tone and texture, telling an oblique story through implication. And for what it attempts to do, it succeeds: this is a transcendent film that creates an authentic sense of what Nordic life in the eleventh century must have felt like. Its taciturn introspection says an enormous amount about early Christian and late Pagan mysticism.

However . . . yes, it moves slooooowly. Some viewers will have no tolerance for this deliberate pacing, especially if a false description, like the one on Netflix, hoodwinked them. The Netflix blurb is worth quoting in full, since it serves as a good launching pad for the strange and difficult to describe tone of the movie:

After years of slavery, Viking warrior One-Eye (Mads Mikkelsen) escapes from his captors and seeks refuge on a Norse ship bound for his homeland. When a storm throws them off course, the crew lands at a mysterious realm inhabited by invisible demons. As the bloodthirsty creatures claim one sailor after another, One-Eye rediscovers his fighting spirit but begins to wonder if they have arrived in Jerusalem or someplace much more sinister.

Whoever wrote this got a few details right, while managing to paint a false portrait of the movie’s tone. The main character is a Viking who receives the name One-Eye. Details of his early life are nil. We never learn how he lost his left eye, why he is mute, or how he became a slave among the pagan Vikings who use him as fighter in competitions. If One-Eye professes any religious feelings, either pagan or Christian, it never becomes clear. He may also possess telepathic and precognitive abilities, such as a bond with a young boy, Are (Maarten Stevenson), who “speaks” for him with an authority that might come from a mental bond. One-Eye has visions, often shot with strange tinted lenses to give them an infernal feel, which portend future events — if we are meant to associate these visions with One-Eye’s mind at all.

One-Eye does slaughter his first captors, leaving Are alive to follow him. He encounters a Christian clan planning to sail to Jerusalem to take part in the First Crusade. Although the clan senses One-Eye is not a Christian himself, they take him along in the voyage. However, after a slog through an endless mist and a moment when the crew almost mutinies and kills One-Eye because they fear he has cursed them, their longboat emerges in a strange, deeply forested land. And here the Netflix description goes really awry, implying some kind of violent fantasy adventure with “invisible demons” in a mysterious “realm,” which sounds like an XBox game set-up.

Actually, the movie makes it obvious where the Vikings have come ashore. I guessed it almost immediately, since it is a part of Viking lore and history, and I cannot imagine that director Refn intended its identity as a surprise. The “invisible demons” are arrows that fly out of nowhere and kill a few of party. But the native hunters are not the only danger: others in the band begin to lose their minds and succumb to the vastness of this weird land. It transforms into a metaphoric “Hell.” One-Eye does not rediscover his “fighting” spirit; his transformation is more subtle and spiritual than that . . . as are most of the transformations on screen once the Vikings emerge from the limbo of fog into this green Hell.

In a BBC interview, director Refn said that although he had the idea for Valhalla Rising since he was seventeen, it altered in the creative process into something unexpected. “[It] was meant to be a Viking action movie, and I ended up making a Viking science-fiction film — in a metaphysical way. . . . In a way, Valhalla Rising is very much conceived like a trip; it’s not a movie you watch and take drugs to, but the movie itself becomes a drug.” He cited both Sergio Leone and Andrei Tarkovsky (who directed the first film adaptation of Solaris in 1972) as major influences, and that the science-fiction quality he wanted comes more from the metaphysical SF films of the 1970s. He does not mention, perhaps because he really does not need to, Stanley Kubrick’s 2001: A Space Odyssey, which is the epitome of this kind of “trip SF” movie, filled with sparse dialogue and engulfing visuals; or the quiet style of fellow Scandinavian filmmaker Ingmar Bergman.

I cannot categorize Valhalla Rising as “science fiction,” but I understand why Refn made the comparison. It is more transcendent than an historical epic, and it hints continuously of powers removed from the earthly realm without planting them in the solid soil of either Christianity or Norse Paganism. The Vikings strike out for a distant land of which they have no true understanding, and for reasons which they can only frame within a limited worldview; their conception of Christianity is far removed from the modern version, with Jesus seen as a chieftain with a grievance over land that was seized from him, and his Viking servants vow to bloodily take it back as is their due to a leader. The land where they eventually emerge, a haunting uninhabited place filled with lush and strange vegetation and unseen killers, might as well be an alien planet. A sort of quiet madness descends on these “astronauts” now, and the alien planet alters them until all sense of “self” begins to vanish. At least, this is how I read it. Valhalla Rising, like some of its inspiration films, leaves much interpretation to the individual, and provides no straightforward answers.

Mads Mikkelsen, whom English-speaking audiences know best for his role as James Bond villain Le Chiffre in 2006’s Casino Royale (where he also had only one eye, and an identical facial scar), was Refn’s first choice for the main character, and he’s perfect. Mikkelsen not only lacks lines, he almost lacks facial expressions. Most of his emotion and projection comes from the freezing of his face and the swiveling of his right eye. When he goes into action in the brief spurts of violence, his movements speak of a fierceness and hatred that are almost supernatural. Mikkelsen achieves his main task: I felt that One-Eye is somehow beyond human, but not in a way that I could possibly grasp. I wanted to know more about him, but was afraid to because it might hurt the character’s power if I did.

The photography by Morten Søberg is key to the movie’s effectiveness. Søberg’s camera has to tell most of the story, because the landscape is a transgressor and a crucible; it changes the characters and invades their mind. The cinematic canvas captures the harsh hills and tors of the Viking’s world, and then the endless oppressive forests of the second one that they discover. (The whole movie was shot in Scotland, although on the screen it appears like two distinct worlds.) Between these places lies the fog-locked boat, which is the eeriest section of the movie and the place where it seems that the characters have passed from reality into fantasy.

Valhalla Rising is a film for particular tastes. It has the “mind-drug” effect that the director aimed for, the subject and time period are fascinating, and the technical aspects for such an inexpensive film are astonishing. It comes close to what I think real Viking life and mentality might have been like, far more so than most historical films. But its obtuse nature and long-walk pacing will turn off viewers who think they will receive a Centurion-style bloodletting. There is room for many kinds of films set in this period, and Valhalla Rising shows that it is possible to create an excellent, introspective, and quiet film from one of the most tumultuous cultures in world history.

My 20 year old son and I were up one night and ran across this on pay-per-view.
We didn’t like it, because we felt like it had this great built-up that just never pays-off.
The ending reminds me of No Country for Old Men. It left me with a frustrated and bewildered “WTF!?!?” ending. One of those movies, that when it was over, I’m setting there, scratching my head trying to figure out what I didn’t get.

Very interesting. I’m one of those who has been put off by the Netflix description. I will now give a view.

Gave it a watch based upon this Ryan. Outside the (too) authentic sheer bloodiness of life, I’m with kid_greg on this: WTF!

Dude, no dialogue is one thing. No dialogue and no rhyme and very little reason is quite another.

I gotta say skip this one, unless you’re drinking with a group of friends and it’s on in the background and no one’s really watching it except for a ‘Whoa, check that out’ moment where everyone glances at the tv in drunken stupor–and then carries on the current conversation.