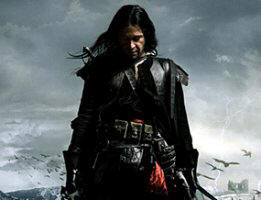 Happy Birthday, REH.  I have to confess that while I liked the idea of commemorating Robert E. Howard’s birthday, I really had no idea what I was going to write about.  With the exception of a brief stint with Funcom, I have never had a whole lot to do with his signature creation and although I am not unaware of his enormous influence on the adventure fantasy genre, I don’t necessarily have much to say about it.  So, I shrugged and decided that I would simply look forward to reading what others might happen to say about the man, whose literary output was as creative and prodigious as his life was tragically short.

Now, I am not a television watcher and the last movie I saw in the theater was The Return of the King.  I prefer books to TV and computer games to film, so it was fortunate happenstance that I happened to sit down on the couch late Saturday night just as a World of Warcraft-like action sequence was unfolding on the screen.  “He’s got a bigger flaming blade than yours,” my wife cracked wise, comparing the weapon born by the giant demonic figure to a rather unfortunate inspiration on the part of a newspaper photographer some years ago.  The dialogue was a little clunky and the effects were less than spectacular, but there was something about the troubled character that was just interesting enough to keep me on the couch.  Or perhaps it was just the warmth of the winter fire, either way, I found myself unexpectedly settling in to watch what appeared to be the start of a movie. 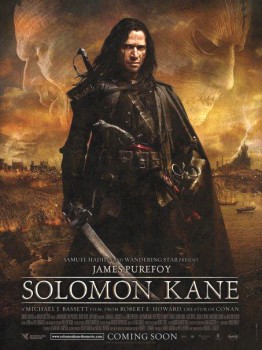 When the character, who looked more than a little like Hugh Jackman’s emaciated brother, had been kicked out of his sanctuary, joined up with a family of religious individuals, eventually put on a black hat that was rather striking, we concluded the movie must be based on some sort of comic book character.  In addition to the archtypical costume aspect of his dress, the character’s name was filled with Biblical resonance and there was a feeling about the setting that was bigger and richer than the usual slapdash Hollywood concoction.  The foreboding sense of evil wasn’t the usual cackling madness of a singular lunatic, but was powerful, even environmental.  Resorting to Wikipedia, my wife confirmed that there had, indeed, been a comic book entitled Solomon Kane… based on a character created by somebody named Howard who died really young.

“Howard… Robert Howard?” I asked.  She nodded.  And I don’t think she quite understood why that made me laugh.

By the way, if you haven’t seen it, Solomon Kane is a pretty good action film.  While it is subject to a few of the usual Hollywood tropes, it is not ruled by them and the Kane character is a more psychologically interesting action hero than most.  For once, the hero is not driven by revenge for [insert murdered family member] here nor by some pathological psychological disturbance, but by hope of redemption.  There are two particularly good moments, once when Kane momentarily reveals a glimpse of the bloodthirsty beast that is contained in the man of peace he has chosen to be to a young boy, and the scene when he knowingly approaches a witch that no one else recognizes.  The details may be different, but at its core, the movie retains the true heroic Howardian spirit.  The times are dark and evil reigns, but it does not reign unopposed.

Happy birthday, Mr. Howard, and may that spirit never be forgotten.