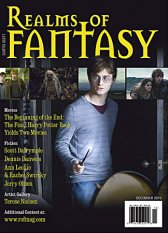 Well, with only about a week left to go in January, today I just received a copy of the December Realms of Fantasy.  You remember, the last one that Warren Lapine could afford to publish, originally available only as a download, but I guess he decided to have a last hurrah.  A February 2011 edition is due out soon from new publisher Damnation Books.

Though I recognize that media tie-ins have always been part of the magazine’s business plan, the less said about a Harry Potter cover, the better.  Four stories: “Queen of the Kanguellas” by Scott Dalrymple, “Maiden, Mother, Crone” by Anne Leckie & Rachel Swirsky, “The Banjo Singer” by Dennis Danvers and “Tools of the Devil” by Jerry Oltion.

I was never a big fan of the magazine, though I was sorry to hear it was going, and glad to hear that it is coming back.  Here’s hoping the third incarnation does the trick.