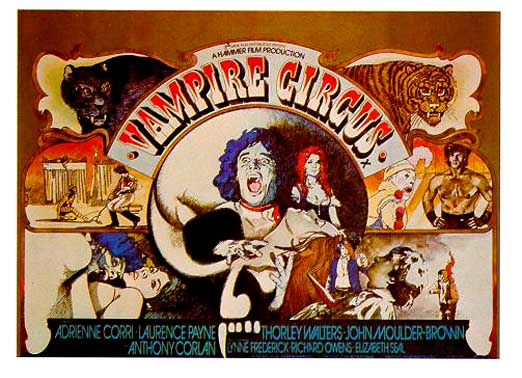 It seems that any time I log into Netflix to manipulate my queue to get physical DVDs, I discover more treasures that I can watch with only a click of the mouse button. Sometimes films unavailable on DVD—or any home video format—for many years. Such as Vampire Circus. (It is available on Blu-Ray, but I don’t have that option.)

Vampire Circus is one of the small treasures of 1970s Hammer Horror, and unfortunately few people on this side of the pond have had the opportunity to see it; the movie has remained incredibly elusive in the U.S. When it was released theatrically in the States, the U.S. distributor de-sanguinized it to a PG rating. Netflix has oddly maintained the PG rating on their page for the film, even though the version they have is uncut and contains the copious amount blood and bare breasts that were the marks of Hammer in its latter days.

Hammer Film Productions knew they were losing the youth audience as the decade started. Their dominance in the Anglo-horror cycle through the late 1950s and the first half of the ‘60s weakened as more graphic and contemporary movies edged in on them, making the Gothic Victorian trappings seem quaint. Hammer also lost a number of its best stars, directors, and technical people, and quality slipped as the ‘70s started. After the excellent Taste the Blood of Dracula, the Dracula series never recovered, and the attempt to reboot the Frankenstein series with The Horror of Frankenstein (on my short list for the worst horror movie the studio ever put out) was a disaster.

But Hammer tried some interesting ploys to broaden their appeal, and even if the movies of the 1970s lack the artistic level of the great Terence Fisher films from earlier, they sure are damned interesting. Most famous of the Hammer experiments is the trilogy of “Karnstein” vampire films, with overt lesbianism. Sex was also a dominant force in the weird-but-not-quite-good-enough Dr. Jekyll and Sister Hyde. The latter film shows the damage done from the loss of U.S. co-funding: the whole movie takes place entirely on three sets. “No, don’t go down into the basement! We don’t have money to build it!”

And of course, there’s that enjoyable almost-swashbuckler, Captain Kronos: Vampire Hunter, which changed up the vampire formula with adventure. It is a good enough film to make you wish it could be a lot better.

Among these offerings, Vampire Circus has a much more standard Hammer plot. The new idea is that of shape-shifting vampires disguised as circus animals (although even that has limited use), but most of it is typical Victorian “villagers against the vampire lord” fare, only with the ‘70s additions of more graphic violence and sex, most of it in the first half. 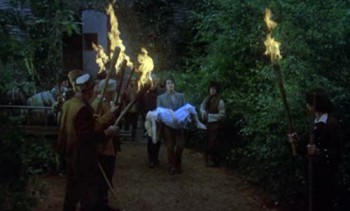 Vampire Circus opens with a strong pre-credits sequence that stands well on its own as a mini-movie. The people of a small town in the Anglo-German country of Hammerland (I suspect it is the Austrian state of Carinthia, but that is only because I like the name Carinthia) finally decide they have had enough with local landlord Count Mitterhaus’s bloodsucking ways and groovy ‘70s shirts and jewelry. After the count (Robert Tayman), in collusion with the schoolmaster’s wife Anna (Domini Blythe), kidnaps a young girl, the villagers band together and sack his castle. People die gorily in the fight, but Mitterhaus discovers that sharp wooden pointy things still work extremely well against his kind. He curses the villagers, saying he will have his revenge and be resurrected. The villagers torch the castle, with Anna apparently dying in the ruins.

The film never attains the same level of excitement in the remaining hundred and ten minutes. But it does try . . . and sometimes comes close.

When the credits conclude, time shifts forward fifteen years. The village is suffering from a plague, and the Emperor—my guess is the Austrian Emperor, but as this is Hammerland, it could be the Emperor of Devonshire for all I know—has sealed off the town with trigger-happy guards ready to shoot anyone who tries to leave. The town leaders, most of whom were involved in the destruction of Mitterhaus’s castle, debate about what to do, and ponder if the disease might stem from the dying count’s curse. Slow-moving curse, but if you’re undead you’ve got nothing but time. 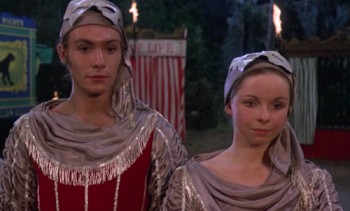 “The Circus of Nights” suddenly enters the town, a small gypsy outfit that has mysteriously gotten past the road guards. Consisting of animals in cages, a sing-songy dwarf (Skip Martin), acrobatic twins (Lalla Ward and Robin Sachs), a strongman (David Prowse), and a sultry red-haired leader (Adrienne Corri), the Circus of Nights exudes all the charm and joy of the Red Triangle Circus Gang that the Penguin leads in Batman Returns. Even before the film audience learns that the circus contains both vampires and their human helpers, the troupe is intensely creepy. That the town welcomes them as entertainment shows just how desperate they must be to forget their troubles.

The story that follows resembles the 1970 Taste the Blood of Dracula: a vampire out for revenge uses his potential victims’ children as targets. The Circus of Nights has come to resurrect Mitterhaus by catching the village leaders’ sons and daughters and giving their blood to the Count in his tomb. As usual with later Hammer Horror films, a young romantic couple emerges as the main opposition to the vampires, in this case the doctor’s son Anton (John Moulder-Brown) and the schoolmaster’s daughter Dora (lovely Lynne Frederick, who was married to both Peter Sellers and David Frost). There is no Van Helsing-style character in sight, but these vampires aren’t at Dracula’s level of menace either.

Where Vampire Circus feels the weakest is the performances of the most of the older male leads. Thorley Walters, who plays the mayor, is the most memorable, since he has the role of comic bumbler. Walters was a pro at this type of part. But Laurence Payne (schoolmaster Müller), Richard Owens (Kresch, the village doctor), and Robin Hunter (Mr. Hauser) make very little impression. It’s partially the fault of the script, which has a devilish time making it clear who is related to whom, and which kid belongs to which inept adult. The children are a far more interesting group. John Moulder-Brown looks a bit young for his part, but Lynne Frederick is glowing, as is Christina Paul as the mayor’s daughter Rosa. The various younger children are also believably cast and work well when put in jeopardy.

As for the villains, principle vampire and panther-shapeshifter Emil gets the most screen time, but actor Anthony Higgins (credited as Anthony Corlan) isn’t charismatic enough to pull it off. Often it seems as he’s being outperformed by his shaggy haircut. He’s much more lethal in panther form . . . except for the previously mentioned panther-hand puppet effect. The rest of the circus people are fun and weird and the actors are clearly having a good time. Lalla Ward steals every scene she is in as the most enthusiastic of all the bloodsuckers; and, I’ll be honest, I just like looking at Lalla Ward. Prowse, as usual in his film career, doesn’t get any lines, but a guy that big doesn’t need ‘em.

The two best sequences in the film after the pre-credits curtain-raiser are an atmospheric stalking through a Romanesque church and a bizarre erotic dance performance. The church scene begs the question: “If the vampires freak out from the sight of a single tiny crucifix, why would they stalk someone into a church?” This makes as much sense to me as a vampire making his headquarters in a solar power plant or a wooden stake factory or a garlic restaurant. Of course, the answer is: “Because old churches look cool, idiot.” And this one does; I especially like the Byzantine design, contrasting with the usual Gothic look. 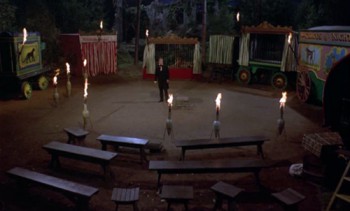 The dance performance is brazen in its sadistic sexuality: a man with a whip writhes around with a naked, bald woman painted green with tiger stripes. This is part of the “general entertainment” the circus shows to the villagers. Amazingly, none of the villagers rush their children away during the naked cavorting. The scene has nothing to do with the rest of the movie, but wow, Hammer was really ready to go for the adult rating at this point to pull in audiences.

There are two vampire-kills in the movie that are over-the-top, almost Wile E. Coyote moments. Hammer had specialized in finding interesting and offbeat ways to kills their vampires aside from the standard wooden stake, but these kills are hilarious in their defiance of physics. I’m not complaining; these kind of moments show filmmakers aware of their responsibility to entertain.

And, at the end of the day (or the hundred and twenty-seven minutes), it’s the entertainment that matters. Vampire Circus has plenty of it. And Lalla Ward! And if you subscribe to Netflix, you can go watch it now.

I’ve already put Night of the Grizzly in my Netflix Instant Watch queue. I think that one will disappoint me, however. No Lalla Ward.