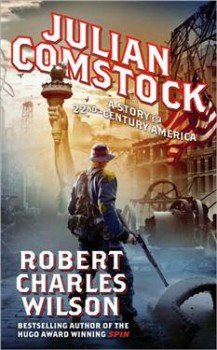 Julian Comstock: A Story of 22nd Century America is not your typical story of a futuristic dystopian United States. There are no mutant cannibals, no hidden super-technologies, no weird psychics or alien visitations. Even “dystopian” isn’t quite right; Robert Charles Wilson’s 22nd century America has its problems, yes, but it is arguably not any more dystopian than any other civilization that crawled its way to the top of the heap in the last two thousand years. The story takes place after the End of Oil, a hotly-debated potential real-world crisis that, in this case, has caused America to revert to a feudal nation with Victorian values and technology.

In his imagining of this future America, Wilson has created a beautiful, brilliant narrative that smoothly carries its characters through the trials and tribulations of the eponymous Julian Comstock, heir to the Presidency of the United States — an office that has, since the End of Oil, become a position of dynastic, imperial privilege. The topsy-turvy, almost-apocalyptic future is a ripe breeding ground for social satire, casting clever barbs at our own past presidents who insisted on being referred to as Commanders-in-Chief by those Americans who were not actually in the army, at the religiously-motivated political institutions that seek to recast the American government as a branch of the celestial kingdom, or the industrialists and captains of industry that tacitly support an economic system so unbalanced that it almost couldn’t help but lead to a return to slavery.

The story of Julian Comstock is told by Julian’s childhood friend, Adam Hazzard — a young, surprisingly literate indentured servant from a family of indentured servants, who by mischance flees his native Athabaska with Julian as they try to avoid the depredations of Julian’s murderous uncle, President Deklan Comstock. They try to flee the draft, only to find themselves conscripted anyway, where Julian distinguishes himself under a nom-de-guerre. What follows is a kind of political cold war between the atheist, secular, science-minded Julian and the Dominion — an organization of Christian churches that holds the army, the American people, and most of the learning of the pre-catastrophe “ancients” in its iron, inquisitor’s grip. 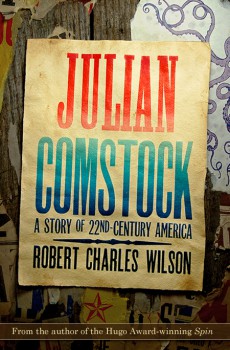 The style of Julian Comstock is a meticulous and, at times, beautiful recreation of a Victorian-style narrative, replete with dry wit and more than one intimation that the narrator doesn’t quite realize everything that’s going on. Adam Hazzard’s continued misunderstandings of French phrases — which he spells and transcribes precisely, but confesses to not being able to fully understand — serve as only the tip of the iceberg. The technique is an often startling and effective one; Adam Hazzard describes what he sees, and what he thinks about what he sees, and yet Wilson presents the narrative so brilliantly that the audience cannot help but notice and conclude volumes more than Adam seems willing or able to tell us. It leaves the reader with a feeling that he or she is genuinely looking into a world whose breadth far exceeds the narrow span of the window that opens on to it.

If the book has a flaw, it must first be that the recreation of the Victorian style is sometimes a little too meticulous. The narrative sometimes works brilliantly — it is often funny, sometimes moving, always at least a little compelling. It is a great means to make savage social criticism or discuss the behavior of a giraffe, but the dirty, vicious battles, the titillating sexual encounters, the raucous, grungy humor of the era aren’t served as well by the narrator’s dry detachment. The feeling of being held at a distance sometimes piques the reader’s curiosity, but sometimes just makes it easy to skip over some bits that aren’t quite as exciting as their subject matter seems to suggest.

If the book has two flaws, the second would have to be that it has a little trouble deciding who it’s about. Ostensibly, the story seems like it ought to be about the titular Comstock, his rise to power, and the subsequent trials and tribulations of his presidency — but if that’s the case, then it is harmed a little by the fact that Julian only appears in about two thirds of the story, the inner-workings of his mind are opaque to Adam the narrator and to the reader, and his motivations can only be deduced obliquely. Practically, the story is really about Adam, and how his eyes are opened to the world as he leaves behind the tiny world of his Athabaska estate and his limited religious upbringing, and moves into a new world of political turmoil and cultural relativism. If that is the case, then it is more than a little frustrating that Adam himself doesn’t ever seem to do much of anything but follow in Julian’s footsteps and benefit from his munificence. The few places where Adam does have agency — prior to a fairly suspenseful climax — are glossed over as though unimportant to the narrative.

And if this reviewer were compelled to find a third flaw, it would have to be that the story itself seems to veer wildly every few chapters. Just when the reader has acclimated to the idea that the story will be one about Julian cutting his teeth as a battlefield commander, it becomes a story about Julian enmeshed in a political power struggle with his uncle, only to switch rapidly to a story about Julian’s artistic ambitions, and then Julian enmeshed in a political power struggle with a Deacon of the Dominion, until, without any base dramatic structure to underpin the climax, it sort of peters out at the end. This is only barely a flaw, however, as the consistency and quality of the writing makes these transitions seamless, and lend it an epic quality that largely disguises the plot’s unusual peregrination.

These flaws might have killed a lesser novel, but in the case of Julian Comstock they seem almost petty. The voicing and the style of the narration is so grand, so comic, so poignant that it never ceases to capture the interest. Throughout the length of the book, Robert Charles Wilson never fails to entertain.

About half-way through this book, I realized that it is a call-out to Gore Vidal’s ‘Julian,’ which traces the rise and fall of Julian the Apostate, the last pagan Roman Emperor.

Both Julian’s were raised in a dangerous exile, far from their murderous and powerful uncles. Both become indispensable through their martial prowess, even though they are more philosophically inclined. Both start fights they can’t win with religious authorities and attempt to Resurrection old beliefs. Finally, both die quite young.

(Although, I really thought the Nero inspired ‘Great Fire/Great Artist’ ending was lacking in subtlety.)

Good insight, Michael. That really makes me want to read it now (one of my recent favorite books is The Martian General’s Daughter, which pulls the same trick of interposing the past on the future).