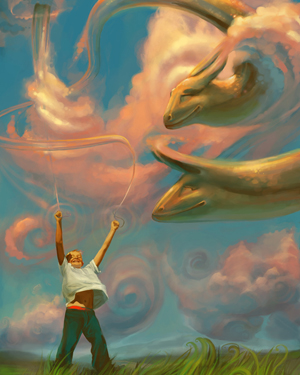 Crossed Genres, the online magazine of Science Fiction and Fantasy with a twist, has just published its 25th issue.

Crossed Genres is edited by Jaym Gates and Natania Barron. This issue includes five complete works of fiction, including “We Shall Overcome,” by Nicole Givens Kurtz, and “The Gift” by Christie Yant, as well as stories by Jaymee Goh, Arthur Carey and Jacob Edwards.

The wonderful cover art (left), “Balloons,” is by Margaret Hardy.

Crossed Genres is published monthly; this is the first issue with the new editorial team. The magazine was previously edited by Bart R. Leig and K.T. Holt. The first issue appeared in September, 2008.

The genre (or theme) changes each issue. The genre for the current issue is “Celebration;” the genre for issue #27 (to be released January 1, 2010) is Tragedy. Submissions for Issue #27 will be accepted until midnight December 31. The next two genres are Superhero and Mystery.

Congratulations, Jaym and Natania! Here’s to many more.

[…] Crossed Genres Magazine is edited by Bart R. Leib, Kay T. Holt, and Kelly Jennings; past editors include Jaym Gates and Natania Barron. The magazine is published monthly and is free to read online; its first issue appeared September, 2008. The genre (or theme) of the magazine changed each issue; genres included Time Travel, Tragedy, Superhero, Robots and Mystery. The magazine renamed itself Crossed Genres 2.0 and started over at issue #1, Boundaries, in January 2013. Crossed Genres Publications also publishes novels and anthologies, including Salsa Nocturna and the acclaimed Long Hidden: Speculative Fiction from the Margins of History. We last covered Crossed Genres with issue #25. […]