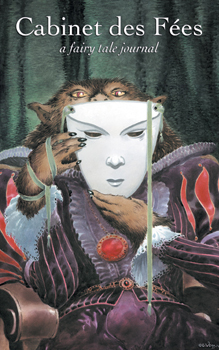 So I’ve discovered this cool thing called Scheherezade’s Bequest. It happened while reading C.S.E’s LiveJournal, when I should have been working.  Right next to a pic of a young woman kissing a horse is this entirely C.S.E-like comment:

cucumberseed‘s story is there, and

shvetufae‘s got a thing in it, and I wish I weren’t at work, so I could REEEEEAAAAAAD IT!!!

To conceal my curiosity about the horse (not to mention my obvious guilt at having less self-control than she during work hours), I asked C.S.E. to explain Scheherezade’s Bequest to me.

Because she knows everybody (and I mean everybody), C.S.E. passed my request along to co-editor Erzebet YellowBoy, who kindly explained that Scheherezade’s Bequest is the online component of the altogether splendid Fairy Tale Journal Cabinet des Fées, which explores the fairy tale in fiction and fact.

Cabinet des Fées came about because in 2005, there was only one genre market (that I could find) for specifically fairy-tale themed material and it was by invite only. I decided that wasn’t enough! Obviously there were markets for fantasy fiction and poetry, and obviously fairy tales can fall into that category, but I wanted to create a thing that focused completely on this field of study. When I mentioned on my LJ about how I couldn’t do it without help, my friend Helen Pilinovsky said let’s do it! And we did.
Scheherazade’s Bequest is the online offering of fiction and poetry. Cabinet des Fées began much as it is now, with a quarterly poetry offering (SB) and an assortment of essays, references, bibliographies, etc., on the website as well. The overall site was called Cabinet des Fées.
When Prime Books said ‘hey, let’s make a print issue’, we decided to name it after the site to keep it distinct from SB, which was only ever meant as an online microzine. We’ve had three issues in print through Prime, while SB continued online. Issue 3 in print was the last one to be published by Prime. Cabinet des Fées is now wholly a Papaveria Press production, and Papaveria will be publishing our next print issue whenever we get around to doing it.

You can find a more in-depth explanation on their About Page.

While you’re there, enjoy the thoroughly charming latest issue of Scheherazade’s Bequest. which contains “Rules for Entering Enchanted Cities” by Megan Arkenberg, “Souk of Dreams” by Keyan Bowes, “Spin Me a Yarn” by Angela Rega, and much more.

Cover art for issue 2 (above) by Charles Vess.

Okay. So the horse.

It’s this awesome bronze statue head on a stick, right outside of the hotel where they hold WisCon every year in Madison. Maybe they used to tether horses to it in the olden days. Who knows?

The first year I went to WisCon with Katie, I met Amal for the second time ever, and Jess for the first, I sort of fell in love with that horse and kissed it. And Amal snapped a picture and the moment is captured for all to see and make mention of on their VARIOUS BLOGS (Mr. O’Neill)!

She says she loves that picture of me best (I don’t know what she sees in it, really), and I use it as my LJ icon whenever something REALLY exciting is happening. SO EXCITING I JUST HAVE TO KISS A BRONZE HORSE HEAD!

The next year at WisCon, I had a second picture taken with the horse. Our relationship was changing. We were friendlier with each other, not so ardent. The third year, Amal and I both attacked the horse from each side, sticking our tongues in his ears. Everything evolves. Even long-distance love affairs with inanimate objects.

I wasn’t going to rat on you that it was YOU kissing the horse.

I did recognize the horse head when I almost ran into it outside the Concourse Hotel in Madison. Hey, that’s the horse making out with Cooney in her LJ picture, I thought. Damn thing nearly broke my ribcage.

But let’s keep further details on your “evolving relationship” with the horse to ourselves, shall we? This is a family-friendly blog, Cooney.

Probbly by next year, I’ll be smashing eggs onto its wee bronze head. That’s all I MEANT, O’Neill. Sheesh. You’ve the mind of an ORC!

I’m not the one, you know, kissing a horse. Just sayin’.

There are all SORTS of precedent in the Fantasy Genre for my behavior. Kelpies, centaurs, uh… And LOTS MORE, somewhere. And anyway, it’s true love. Whatchoo gonna do about it, punk?