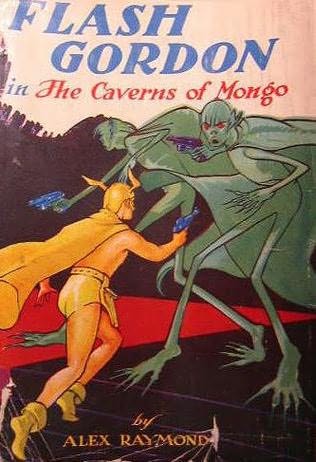 “Caverns of Mongo” was the fourth installment of Alex Raymond’s FLASH GORDON Sunday comic strip serial for King Features Syndicate. Originally printed between March 3 and April 14, 1935, “Caverns of Mongo” picked up the storyline where the third installment, “Tournaments of Mongo” left off with Emperor Ming having made Flash a royal King of Mongo and awarded him and Dale the savage uncharted cave kingdom of Kira to rule. 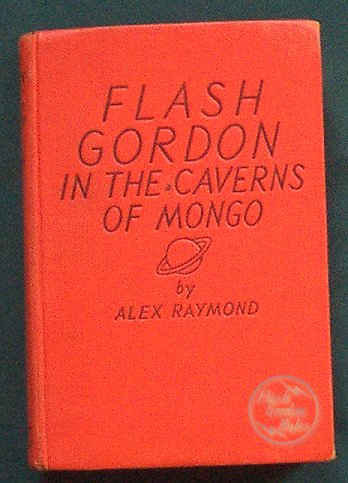 Flash and Dale are accompanied on their journey by Captain Khan and a squad of loyal Hawkmen who were ordered by Vultan to aid them. The kingdom of Kira is wonderfully prehistoric peopled with Neanderthal-like cliff-men, winged dactyl-bats, carnivorous plants, and a man-eating sauropod. This may be standard lost world fare, but with the introduction of the cannibalistic lizard-men as the true villain of the piece, there is no mistaking the influence of Edgar Rice Burroughs.

While Jules Verne and Sir Arthur Conan Doyle had popularized the concept of lost prehistoric lands that survived to the modern age, it was Burroughs who perfected the mixture of lost world and pseudo-science in both his Caspak and Pellucidar series. The latter in particular are the strongest influence on Alex Raymond here with the lizard-men portrayed as not only the more advanced culture, but a decidedly evil one. The scene where Flash (rendered unconscious in the lizard-men’s ambush) is taken to their lair and prepared as the tribe’s meal is particularly chilling.

Flash recovers consciousness, but is unable to escape as the entrance to the lizard-men’s lair is covered with rocks. Dale, Captain Khan and the other Hawkmen are gathered on the opposite side of the rock wall in a futile effort to rescue him. Dale manages to pass a nitro-gun through a small opening to Flash. Raymond has a nice bit of business here by carefully leaving to the reader’s imagination where Flash, dressed only in a loin cloth, hides the bulky nitro-gun. 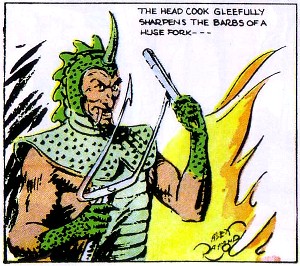 Flash feigns unconsciousness and allows the lizard-men to lead them before their king, the Grand Dragon. The lizard-men’s king sits on a throne carved into the shape of a giant lizard’s head. While this may be consistent with Ming’s death’s head throne seen in the previous installment, Raymond is notably repeating himself. The lizard-men’s monarch remains nameless here in another sign that Raymond was likely rushed in crafting this particular installment.

Raymond was apparently at a loss on how to extricate Flash from being eaten by the cannibals and, in the time-honored serial tradition, simply decided to cheat. One minute the lizard-men are preparing to roast Flash alive and the next, they have inexplicably left him alone to gain a weapon and then when they do come for him, it is only to take them to their leader. 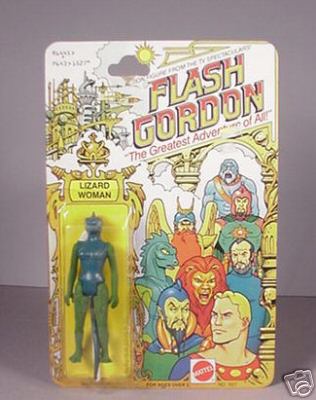 next. As a result, plot holes were not uncommon. The series had opened months before with Mongo about to collide with Earth and Raymond seems to have lost all sight of this. What’s more, in the current storyline their fellow Earthling, Dr. Zarkov is apparently content to remain as Vultan’s chief scientist in the Hawkmen’s sky city. Raymond neglected to even offer a farewell scene for Zarkov before Flash and Dale set off in a rocket ship bound for the cave kingdom of Kira with their Hawkmen attendants.

Alex Raymond was, principally, an artist and the scripting is clearly secondary to the visual delights. Don Moore contributed to the scripts without credit. Nearly 80 years later, it is impossible to know definitively how much of the writing was Moore’s and how much was Raymond alone.

As to our heroes plight, the nitro-gun quickly frees Flash from the lizard-men. Flash hurls the Grand Dragon onto the flaming gridiron and cuts down a number of the lizard-men with his nitro-gun. The Hawkmen sweep down from above and rescue Flash who is happily reunited with Dale and Captain Khan as this abbreviated installment races to an abrupt finish. 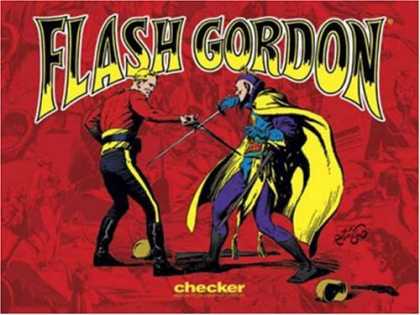 This short episode, while entertaining and offering more of Mongo’s diverse world, is unmistakably a filler story giving Raymond much needed breathing space before commencing on his next epic.