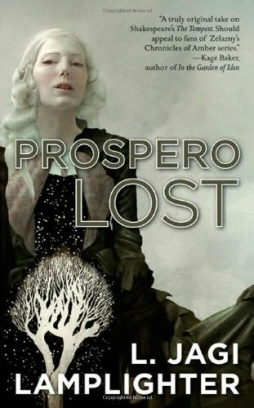 Prospero Lost is the first book of a trilogy and the first published novel by L. Jagi Lamplighter, whose name I assume is not a pseudonym,  though it sounds as if it could be a character in her own book.  As you might gather from the title, the story has something to do with what many critics perceive as Shakespeare’s alter ego in his final play, The Tempest, while also somehow involving hell and rebellious offspring given the  allusion to Milton’s Paradise Lost. What you might not expect is just about every fantasy trope you can think of, including (I kid you not), Santa Claus.

It’s perhaps not surprising that Lamplighter is married to John C. Wright, who also favors the everything-including-the-kitchen sink approach to fantasy and manages to make it work. In many respects, Lamplighter’s book reminds me of Wright’s Chronicles of Chaos series which deals with the foibles of family relationships among seeming humans possessed of fantastical natures. Of course, the root of this is Greek/Roman mythology in which imperfect gods irrationally vie among each other out of jealously, envy, egotism or other petty and irrational motivations.  They are, in other words, normal human beings dressed up in magical togas.

According to Lamplighter, the inspiration for her novel’s fantasy world  stemmed from a roleplaying game.

Somewhere in the early Nineties, John and I were invited to play in a roleplaying game run by a friend. He was a new moderator for us, so I decided to write a short story demonstrating what my character could do, so there would be no misunderstandings. For my character, I picked Miranda, the daughter of the magician Prospero from Shakespeare’s Tempest, only in the game, Prospero would turn out to be one of the magicians in the game background…We only played in that game a few times, but I liked the character and the story I had written.

Miranda is the narrator and focus of the novel (indeed, the overarching title of the trilogy is Prospero’s Daughter) and Prospero remains totally off-stage.  He is lost, and Miranda is trying to find out what happened to him.

Miranda has come a long way since events recounted in The Tempest, the details of which in Lamplighter’s retelling were relayed directly to Shakespeare by Prospero, but bastardized from what “really” happened for dramatic purposes.  What “really” happened is that Prospero retains his magical powers and returns to Milan as Duke, Ferdinand seemingly jilts Miranda at the altar, and Ariel and his fellow spirits are not freed and continue in servitude to Prospero and his family.  Thanks to  the “Water of Life” provided by the goddess Eurynome, to which Miranda is an aspiring acolyte (while also seemingly a contemporary believing Protestant; alas, if only real life could only be so seamlessly ecumenical we’d avoid a whole lot of problems), Prospero and family have survived to the present day.  And that family now includes eight siblings, each of whom has a magic staff with unique properties and from whom Miranda is mostly estranged. Technically, they are not immortal, but rather are humans who profit from a magical life extension technology; in fact, one of the siblings has died, though, like Prospero, his corpse is missing and will, perhaps, be brought back to life in a future volume.

Modern society would seem to be in debt to the fabled sorcerer; thanks to arrangements brokered among winds and other magical entities that control violent earthly weather conditions, “natural” disasters have been minimized to allow humankind to progress technologically (another kind of useful magic). These agreements are maintained and fulfilled the same way as any corporate contracts, overseen by the multinational Prospero Inc. and its CEO, none other than our heroine, Miranda.  When her father disappears with a note warning her of his inadvertent release of demons collectively called the “Three Shadowed Ones,” Miranda employs Mab, an embodied spirit whose trench coat and notebook connote shades of Sam Spade, to investigate.  First order of business is to find her siblings and warn them of the danger to themselves and their staffs.

Along the way, Miranda is to discover some unpleasant truths not only about her family, but about herself, along with encountering various demons and bad guys and, oh yeah, that Ferdinand fellow, whom with if she were to consummate her vows and lose her virginity after all these centuries would imperil her and her family’s longevity.  And then, there’s the aforementioned Father Christmas, shades of C.S. Lewis! 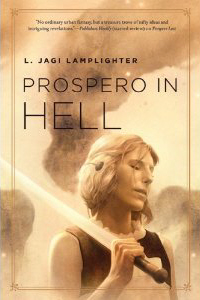 If it all sounds a little silly, well, it is. Then again,one of the monumental works of English literature concerns an exiled sorcerer who magically  arranges to shipwreck a suitor for a daughter who has never seen a man, and an enslaved monster offspring of a witch who seeks to overthrow the sorcerer with a bunch of half-witted humans sounds kind of silly, too.  Not that Prospero Lost is in any way the literary equivalent of its source material, but, then, that’s not the intention.  Which presumably is to have some fun with both literary and mythological conceits, and maybe along the way hint at something more serious.  For example,  I particularly liked mention of the  Gnostic version of the Genesis fable in which the goddess of wisdom sends her daughter, Eve, to lead Adam out of his childlike existence in Eden into mature adulthood.  I assume this is the theme of the overarching series; too bad it wasn’t that of contemporary Western religious beliefs and we’d have saved a lot of grief over the years debating notions of sinfulness (which is also frequently silly even as it is destructive).

The next edition of the sequence, Prospero in Hell, just came out last month.  I haven’t read it yet, but preliminary indications are of darker turns.  Which is what second volumes do until everything gets worked out in the end.  I assume that’ll be the case here, though I think the details might still make it fun finding out how that all comes about.