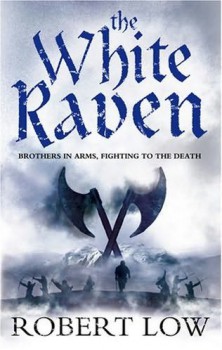 Robert Low’s Oathsworn books are hands down my favorite historical series of recent years. Starting with 2007’s The Whale Road and continuing with last year’s The Wolf Sea and Low’s newest release, The White Raven, these books offer a Viking adventure worthy of the sagas — and satisfying to both lovers of gritty action-adventure and those who insist on well-drawn historical narrative.

The White Raven begins some five years after the close of The Wolf Sea, a book that saw the Oathsworn, a darkly fated and Odin-oathed band of hard-bitten Norsemen, pursuing a mad monk, an ancient runesword, and rumors of enslaved brethren from the mazy streets of Constantinople to the sun-blasted heights of Masada. Returned from Serkland, as the Norse term the domain of Islam, the Oathsworn have settled in lands granted them by Jarl Brand, a powerful leader who served as mercenary in the Byzantine army. Orm Rurrikson, so-called Bear-Slayer and jarl of the Oathsworn, is still only twenty-one years old at the start of the book. A leader renowned for his deep-thinking and fair rule, Orm nevertheless finds the mostly peaceful existence the Oathsworn have settled into a troubling one. Troubling especially because rumors of a mountain of silver, the tomb treasure of Attila the Hun, cling to the Oathsworn like a curse — and there is not a band of rovers or petty king in all the North that has not cast a covetous eye upon Orm and his intrepid band.

And it is one such band, led by a man called Klerkon, that sets the story of The White Raven into action with a raid on the steading of Orm’s neighbor and the kidnapping of the sister of one of the Oathsworn’s women. The Oathsworn pull stakes and abandon their holding — bringing even their wives with them on the journey — and make a move against their enemy. Razing Klerkon’s settlement, they rescue a strange nine year old boy slave named Olaf. He turns out to be a Prince, but his adult manner and eerie prescience have earned him the nickname Crowbone. Readers familiar with history will know him as the future Saint Olaf Tryggvason, a pivotal figure in Scandinavian history.

The band travel east, and find themselves once again in Novgorod, where Olaf’s impulsive actions place them in peril of imminent impalement. They are spared by the city’s ruler, Prince Vladimir, himself a boy not much older than Olaf, in exchange for guiding the Prince to Attila’s treasure. But Vladimir is involved in a succession crisis with his brother and is in a hurry to get his hands on a fortune in silver, and so the Oathsworn and Vladimir’s soldiers set out on the Russian steppe — in wintertime.

And it is in fact winter that ‘The White Raven’ is a metaphor for, and Low expertly evokes the privation and peril of a trip through such a frigid and barren landscape as the steppe. Frostbite, hypothermia, snow blindness, starvation — like the rest of Low’s work it is all as real and authentic as a journal entry from someone who actually suffered through such things. Coupled with Low’s beautifully evocative language, a prose style rooted in the rhythm and allusions of the sagas and replete with the casual use of archaic words like ‘hirpling,’ ‘guddled,’ ‘flyting,’ and ‘hoik’ that seem almost familiar in context, these novels feel satisfyingly like something lifted from the world of the 10th Century and translated into the idiom of our time.

Low’s use of magic in the series has always been interesting — as this was an age of superstition and widespread belief in otherworldly forces and to gloss over such things would be a disservice. Magic works on the minds of the beholders, and always seems to have an underlying explanation for we in a (somewhat) more rational age. An excellent example in The White Raven is the Oathsworn’s hunting of a band of Vodoniye, creatures out of Russian myth. The creatures are given a rational explanation, and the whole affair a cynical edge, but the episode still feels like framework for a saga story. Further myths straight out of Herodotus lend an even more fantastical gloss to the quest, the culmination of which finds the Oathsworn themselves figures of legend.

For, at the close of The White Raven, the Oathsworn realize they have gained Odin’s Gift — fame. The challenges and responsibilities for that will no doubt be addressed in the fourth and concluding volume to the series, The Prow Beast. In the interim, Low’s first three books will thrill fans of historical adventure and set a new standard for any that would write about the Viking Age.

Sounds like something I’d really enjoy. Thanks for sharing, Bill.

I had already added Low to my “must read” pile, but this just reinforces it. Thanks Bill.

It really is a superb series, I’m in the middle of the fourth and final book now (The Prow Beast — expect a review in BG 15) and it is made of pure awesome.

I’ll buy everything Low produces at this point, he’s one of my new favorite authors.