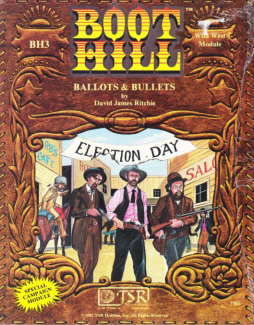 As I was walking the hallowed halls of the Indianapolis Convention Center during this year’s GenCon, I managed to uncover a handful of truly wonderful relics. Perhaps the greatest of these [although I contend that L3 Deep Dwarven Delve by Len Lakofka with Wayne Reynolds art in 1st Edition format is still in the running] was this masterpiece from TSR’s defunct Wild West game Boot Hill.

Now you may be asking “Boot Hill, really?”, and indeed I would be saying the same thing — if I hadn’t made it a personal quest to uncover many secrets about early TSR artists and their antics in the legendary ‘pit.’ So we have BH3 Ballots & Bullets by David James Ritchie, which by no means defines the game or genre, and yet played out in the cover is a true stroke of genius. Here, in muted color, we are once again reminded as fans of the fantastic comedy of artist Jim Holloway.

The four men featured here are all that truly matters about BH3, as right to left we are shown TSR Art Director (and cover artist for such classics as B2 Keep on the Borderlands and D1-2 Descent into the Depths of the Earth) Jim Roslof, a very Jimmy Stewart looking Jeff Easley; the gambler himself, Jim Holloway, and all the way to the left on horseback, the crazy old coot Larry Elmore (click on the image at left for a larger version).

Yes, that’s them, the entire TSR ‘pit’ crew circa 1981. Looking at this cover it seemed as though I had a snapshot of that time period, but this was even better. Having these artists, all in their youth, portrayed by the hand of one of their own made this purchase perhaps the greatest in my collection.

Seriously, if you’re a fan of the beginnings of role-playing, then you have to love this module, and if you’ve never played Boot Hill I suggest you give it a try, just for the fun of pulling a six shooter and gunning down a ‘black hat’ in the middle of Tombstone or Carson City.

[As a side note, you can also use the awesome Boot Hill maps and counters with any newer Wild West game such as Deadlands or Sidewinder. It’s a great way to spend an afternoon, ‘partner.’]

Holloway is a classic joker, and everything about his art shouts humor. It was Jim Roslof himself who sent me a couple of Holloway’s classic sketches from the ‘pit’ that make this color work all the more nostalgic.

When TSR went corporate and they demanded a mascot for their new lines of ‘kids’ products, a kindly wizard named Morley, this is the treatment Jim decided he’d hand over to Roslof (click for larger version). 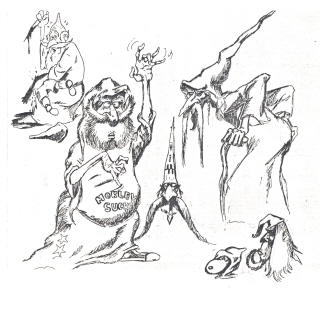 A bit dark? Perhaps, but who hasn’t fantasized about telling upper management to get bent, and in this is a rather honest portrayal of his feelings on that particular day.

And if Morley wasn’t enough, you can always look at some of Holloway’s caricatures work for all his fellows. Elmore tromping over the TSR staff cartographers/designers/editors Harry Quinn and Steve Sullivan, with Roslof scratching his head and Easley asking after an intern they had for a summer from Europe named Martine. 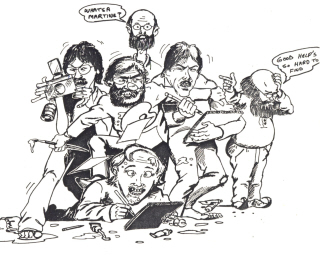 Holloway, however, was never one to take himself out of such a roast, and he appears fumbling with a camera to the for left.

Then we move on to more elaborate shot, this one for an actual TSR promo page featuring the samurai Holloway [who is actually half-Japanese], the toy robot collector Easley, Elmore as Yosemite Sam, Harry Quinn is the Titanic survivor, and a rather buff Roslof is in road warrior gear with newly anointed artist Tim Truman as his ‘dog.’ 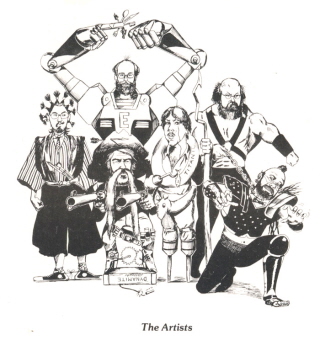 I think these shots help put into perspective what those long lost days in the early eighties were about. TSR was not only a breeding ground for artistic talent, but also a place where young artists of vision and levity gathered to make all the worlds gamers still roam today more fun.

Perhaps Holloway isn’t the best known of these men, but I will say he holds a special place in my heart for all his contributions to the industry, including his rather unique take on life in the birthplace of role-playing.  So I raise a glass to you Mr. Holloway, from the Desert of Desolation to the war-torn fields of the Successor States, you always managed to bring a smile.

[…] market with a new game focused on pirates, or science fiction, or the Bronze Age, or the Wild West, King Arthur, horror movies, the fall of Moria, the Federation, the Empire of the Aztecs, Middle […]