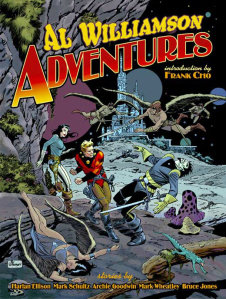 Al Williamson, one of the finest science fiction artists of all time, died yesterday in New York City.

By 1966 he was drawing Flash Gordon for King Features, which garnered him an award from the National Cartoonist Society. In 1967 he took the reins on another Alex Raymond creation, Secret Agent Corrigan, which he drew for over a decade. Art historians note that Williamson used his own face as the model for secret agent Phil Corrigan, which made him easy to recognize at conventions.

In the 1980s Williamson began his famed Star Wars comic adaptations, starting with The Empire Strikes Back for Marvel. Williamson was reportedly George Lucas’ first choice for the Star Wars newspaper strip, as Lucas was a fan of his EC Comics and Flash Gordon, and Williamson drew the daily and Sunday feature until 1983. He did additional work throughout the decade for Pacific Comics (Alien Worlds), Marvel (including Blade Runner and Epic Illustrated), and DC (Superman #400).

Since 1998 half a dozen retrospectives of his work have been published, including Al Williamson Adventures, The Al Williamson Sketchbook, The Al Williamson Reader, Vol. 1, and Al Williamson: Hidden Lands. Most of these had tiny print runs, and I had trouble tracking several of them down a few years ago.  If you want copies, I suggest acting quickly.

Science Fiction site io9 has a gallery of some of the best work of this incredible artist, and comics writer and artist Jimmy Palmiotti has written a eulogy here.

[…] He started working for E.C. Comics in 1952, illustrating stories by Harlan Ellison, Ray Bradbury, and others, in titles including Valor, Weird Science, Weird Fantasy, and Incredible Science Fiction. I remember him chiefly for his later work, especially his famed Star Wars comic adaptations, and his 80’s art in Alien Worlds and Marvel’s Epic Illustrated. He passed away in 2010 (see the BG obit here). […]