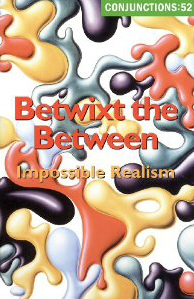 The Spring 2009  issue of Conjunctions (yeah, I know, my reading is way behind) edited by Bradford Morrow and Brian Evenson, the twice yearly literary magazine published by Bard College, is a follow-up to its New Wave Fabulists issue of about eight years ago. This time around there’s less effort expended in attempting to define a “new” subgenre. Instead, there’s a simple page-and-a-half introduction and a title, Betwixt the Between: Impossible Realism, that I find more concisely descriptive of this type of  fiction than the extensive critical commentary contained in its predecessor. Alas, I found the fiction selections overall less compelling than when the earlier volume was trying to prove something.

Part of the reason I didn’t connect with some of these stories may be the underlying premise of the objective here. I don’t have a problem with the premise. I just don’t think it was fulfilled. According to the editors,

Betwixt the Between investigates ways in which, on the one hand, works of fiction treat the impossible as if it were the solid groundwork of the real or, on the other hand how the ineffable can sometimes flash lightning-quick through the realms of the real, leaving everything the same and yet unaccountably changed. Worlds and concomitant models of logic are offered here that reveal something about our daily existence and yet turn away from it to forge disjointed realities that strike the reader simultaneously as familiar and anything but.

Case in point is Shelly Jackson’s “Flat Daddy.” At first, I thought this was some sort of metafictional meditation:

Readers, you might object that this page is also flat. These words—”milk,” “rain boots,” “goop,” even “I”: print on paper. My Flat Daddy and I lie edge to edge in this sentence, only an “add” between us. I might be the accused of being the very kind of thing I have announced: the billboard calling the bas-relief flat. I have tried to dismiss the evidence that I am a figure study, portrait of the artist as a young cheese.”

And that’s one of the more lucid passages. It’s only by looking at the author notes that you discover the story is “composed of words found on the first page (front and back sides) of The New York Times/New England Edition, 9/30/06. One word has been added.”  I have no idea what that particular word might be, or why I should care.

While none of these stories are nearly as incomprehensible, a few seem to strain to “reveal something about our daily existence,” but fall short. “Dr. Eric” by Rob Walsh depicts  a doctor-patient relationship, and perhaps means to explicate the weird dynamics of the powerful (and heathy) and the powerless (and ill), but it left me scratching my head.  “Cathy could tell Dr. Eric, Dr. Eric said, his voice sweetening. He closed one eye reassuringly” (p. 303).  How exactly is closing an eye reassuring? Or is the point that it is not? That, in fact, it’s just weird?

J.W. McCormack’s “Poiuyt!” is also a bit beyond me. I think it is an attempt to develop a storyline that reflects the visual tricks of the various illustrations (such as the famous old lady/young lady graphic, depending on how you look at it) that appear throughout the text.  The narrator’s uncle has died and left an inheritance, “an islet in Windwards,” that is, you guessed it, not what it might seem. This is no mere pedestrian horror story, though, but an elaborate maze of wordplay and jarring juxtapositions. I admire the effort, but it struck me as too clever for its own good to hold my interest.

On the other hand, “Feral” by Julia Elliot takes a familiar theme and even though you know where it’s heading, is at least more enjoyable for its prose.

That autumn a pack of feral dogs swept into our schoolyard, barking and keening and charging the air with an electrifying stench—wild festering creatures, some bald with mange, others buried in comical clumps of matted fuzz, or hobbling on three legs, or squinting through worm-eaten eyes.

Despite the stories that strike me as trying too hard to be weird and profound but fall short (either because of the author’s failings or because of mine), as well as a few that just strike me as conventional (the contributions from Elizabeth Hand and Joyce Carol Oates, for instance, are Twilight Zone riffs),  there are those that not only fulfill the editorial promise, but, better yet, are just plain good old-fashioned creepy.

Here, for example, “The Familiars” is Micaela Morrissette’s version of The Turn of the Screw about a mother’s attempt to protect her child and, like every parent’s efforts, are ultimately destined to fail because of our inability to control the larger world:

She knows it’s beautiful.  She knows what kind of skin it has—blue veined, with a thick translucece like shellfish, bruising easily in a kid of panic. She knows because it is obvious. She knows, becuase her son has told her, in a voice with a reverential, primal hush, like the silence of dim morning air at ease on still water, that his fiend has a wonderful facility of climbing in the trees and running in the tallest, most whipping, stinging grass…She doesn’t know the secrets it shares, the memories it hides, the fears it cherishes, or why it is vying for her son.

Similarly, “A Man of Vision” by Patrick Crerand depicts a tour through an almost empty zoo; potential donors are asked for contributions (though they are donating to nothing other than to advance their own prestige, just like in the real world) that will place their names on vacant exhibits. One woman successfully bids on a display that has an animal in it, albeit one that remains unseen, but in her exuberance over winning the naming rights accidentally knocks her young son into the creature’s denizen. Whether the boy can be saved, or should be saved, has unpleasant philosophical pondering backed up by the persuasiveness of a rifle. Whether everything turns out for the better depends, of course, on your point of view.

While the prevailing motif here is absurdism, there’s also a few genre re-interpretations that is characteristic of much new wave fabulism/impossible realism/whatever you want to call it.  Robert Kelly revisits the Parsifal myth, with a Gene Wolfe twist in “The Logic of the World.” Perhaps dragons aren’t so bad, after all, and a less complicated view of reality might be better for all of us. “Ourselves, Multiplied” is Jedediah Berry’s take on the mad scientist trope.  There are also authors more familiar to genre fans, including an except of China Miéville’s “detective novel, ” The City and the City (I’d recommend skipping this and reading the book), and contributions from James Morrow, Jeff VanderMeer, and Jonathan Carroll, which alone makes this issue worth checking out.

My favorite story here is “BioticaKF” by Jon Enfield, which extrapolates current agribusiness practices to a not unbelievable extreme to illustrate the inhumanity of corporate mass production. Warren is a “herder,” a mindless job in a factory that produces artificial meat. His co-worker’s running joke is that taking a day off “calling in well” because you have to be “sick to work this job.” Warren’s dying uncle, in his eighties and confined to a wheelchair, recently was interrogated by Transportation Safety Agency lackeys during a recent flight for “secret” reasons, which may be contributing to his declining health. A pitch perfect depiction of life in modern times, a tale of impossible realism that depicts the experience of “betwixt and between” the absurdity of everyday life.

Stephen Marche, The Personasts: My Journeys Through Soft Evenings and Famous Secrets

China Miéville, From The City & the City

Scott Geiger, A Design History of Icebergs and Their Applications

Georges-Olivier Châteaureynaud, La Tête(translated from the French by Edward Gauvin)

James Morrow, Bigfoot and the Bodhisattva

Theodore Enslin, The Spirit of a Lark

Edie Meidav, The Golden Rule, or, I Am Trying to Do the Right Thing

Michael J. Lee, The Next Country

Patrick Crerand, A Man of Vision

Robert Kelly, The Logic of the World

Nice review, David. I’ve been curious about this one for a while.

I’m not familiar with Jon Enfield. Any idea what else he’s done?

Don’t know much about Jon Enfield, either. According to the author notes, he teaches writing at the University of Southern California and “is working on a novel.” I did a quick Google search and he doesn’t seem to have much of an Internet footprint.

That’s the great thing about these anthologies, particularly those with the express purpose of showcasing authors outside of the “genre ghetto” – you get introduced to writers you wouldn’t normally encounter.