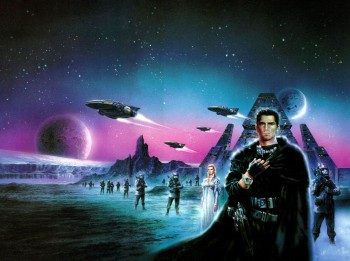 Occasionally a bit of book-to-film news seems to come out of nowhere and create some genuine surprise. So, amidst reports of this-or-that being remade, rebooted, retread, reimagined, or reduxed (what is it this week? Lord of the Ring Tones? Aliens vs. Predator vs. Chucky vs. Tony Montana? T.J. Hooker on Mars?) it seems there is actually an original, never done before, not part of a hot franchise redo, SF book adaptation slated for television. Gordon R. Dickson’s Childe Cycle, better known by the name of the first book in the series, Dorsai!, is being made into a live action series by MDR productions (official site). Announcements to that effect can be read at SFsignal and SF Crowsnest.

Not a great deal of information on it yet, just some nice art and story boards, and general background. The Dorsai! universe is an interesting choice, from a  series of books I enjoyed but one that felt very disjointed and fragmented due to the long time separating books, the somewhat cobbled together nature of the earlier ones, and similar issues. I have a bit of a hard time imagining the tv series (or mini-series more likely) picking up on future books as, if I recall correctly, they mostly all jump ahead in time and present an entirely new cast of characters.

But Dorsai! had a great space opera/military science fiction feel to it, and seemed to me a partial inspiration for Herbert’s Dune universe. In a galaxy-spanning future, mankind has fragmented into specialist cultures, and the Dorsai are a warrior society of crack mercenaries. A great genius emerges among them, and makes them more than mere guns-for-hire, in a story that is full of politics and battles. It’s been quite a while since I’ve read the books, but they were certainly enjoyable.

One thing that struck me as odd on the Dorsai! site is a press release: “MDR Entertainment, a production company that creates original programming is announcing their first live action series for television: Dorsai has been designed around kids ages 8 – 14.” Say what? I’m all for making it family friendly, but the words designed around seem to imply that this is being made for children. Hopefully it’s a bit of targeted hyperbole for a press release that went out to some kid-centric organization and my initial reaction of irritation (at the notion that a story about spaceships and super-soldiers just has to be aimed at kids, you can’t take that seriously) is misplaced. As always, I’ll flip the autopilot to ‘guardedly optimistic’ and wait and see with the rest of us how this turns out.

Cool news. I have to admit that I was always a little confused about where to start with the Dorsai books. The novel DORSAI! was written in 1959, but the books that seemed to get all the press were SOLDIER, ASK NOT (1967) and NECROMANCER (1962).

They were written out of chronological order, too. According to Wikipedia, NECROMANCER actually occurs first, then TACTICS OF MISTAKE.

This was too much for me as a teenager (when I didn’t have Wikipedia to help me sort it all out). I was always intrigued by Dorsai, but never read it.

At least a few of the novels appeared first as short stories that I first came across in THE HUGO WINNERS anthology, edited by Isaac Asimov, though.

According to Wikipedia (where I got all these dates), Dickson died before he could finish the last book, CHILDE.

Any idea where the series will start? Or where they SHOULD start? 🙂 Chronologically, or in book order? Right at the beginning, or with the later, more famous novels?

See? I’m already confused. I should just stay away from this topic before I confuse everyone else.

The series is definitely a bit of a mess, which is one of the reasons I sort of doubt they can cover too many of the books. I read the series in publication order (Dorsai! first), and I haven’t read all of them, but really you could probably just read them in almost any order. The tv show will cover the story of Donal Grahaeme in the first book, Dorsai!.

I’d say the best way to experience it would be to read Dorsai!, Soldier Ask Not, and Tactics of Mistake, as a ‘trilogy.’ Necromancer doesn’t really feel like it fits the rest of the series (it’s a prequel taking places centuries before everything else).

I think ‘Tactics’ is probably the best, and could be read on its own with no problem. I did lose interest in the series after a while, as the style shifted and the books got much longer and slower.

Thanks for posting this. I am Dave Fraunces, one of the executive producers of the project. My partner, Mark Rodriguez and I are long time fans of the books. I myself, read Dorsai! at age 12, 25 and 35. It gets better every time.

To answer the question above – we are starting with Dorsai!, the signature book in the series. Necromancer, Tactics and Spirit of the Dorsai occur prior to Dorsai! However, Dorsai! represents the most complete story arc for a series. Plus Donal Graeme is the hero we follow throughout all remaining books (with a slight name change). Dorsai! remains one of the foundation novels of military sci-fi … along with Starship Troopers. How could we start anywhere else?

Be well and feel free to forward any additional questions.

Thanks for posting. Starting with Dorsai! makes a lot of sense.

Is this intended as a mini-series, or an ongoing production?

Also, can you comment a bit on Bill’s question about the target age? I can see both pros and cons for doing a kid-friendly series (I have 3 kids aged 10 -14), so I’d love to know.

I am Dave’s partner – you got us both today! We originally created this in two directions:

1st – as a project that would be worthy of SyFy Channel or another large network.

2nd – as a high concept live-action kids show. Where we would focus on Donal as a young boy and his journey to becoming the greatest general.

We are hoping for the 1st option, as that would allow us the most flexibility to tell a great story worthy of the book and the fans.

I hope that this clears up any confusion.

Thanks again for your interest and a great posting.

Thank you both for stopping by and filling us in. I’ll certainly be keeping an eye out for how the project progresses.