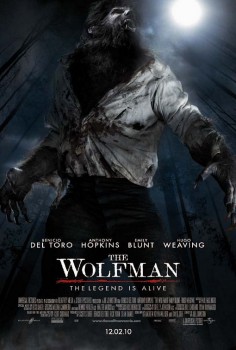 The re-make of the 1941 Universal horror classic The Wolf Man had a hellaciously crazy time getting to you this weekend. Original director Mark Romanek was removed from the film right before shooting commenced, giving replacement director Joe Johnston only two weeks of prep time. The studio rejected Danny Elfman’s classically-toned orchestral music and hired Pauls Haslinger from Tangerine Dream to re-score the picture . . . only to reject his music a month before the release date and put Elfman’s music back in. The movie, shot in the summer of 2008, was pushed back repeatedly, with new editors brought on in what seemed like a flurry of desperation to save a troubled, messy film.

All this caused considerable concern among old school horror fans like myself, for whom the George Waggner/Lon Chaney Jr. The Wolf Man is a primary text. (Read my thoughts on the original here.) Maybe the movie was in serious trouble; or perhaps Universal wanted to get it just right. We all wanted this film to work; we feared it would not.

I can now confidently report, as a Universal-and-Hammer Horror geek, that the compound word 2010 The Wolfman most definitely does work. It shows evidence of breaks and tears and furious hammering to cover construction difficulties. It has pacing trouble (for once, a movie that goes too fast), character and plot loose ends, and a female lead who doesn’t bring much to the film. It’s flawed, when you come down to silver tacks (not brass tacks; this is a werewolf film). But The Wolfman is also bloody furious fun of a kind that contemporary horror films just haven’t given to somebody with my tastes in a long time. Terence Fisher fans, James Whale fans, Jack Pierce fans, Lon Chaney Jr. Fans, werewolf fans, Victorian London fans, steampunk fans, go see this movie . . . warts and bare patches and all, this is your film.

Director Joe Johnston, a former effects designer who turned director with 1989’s Honey, I Shrunk the Kids, has directed some remarkable films when he feels inspired (The Rocketeer, October Sky, Hidalgo) and some pretty dismal ones when he’s work-for-hire (Jumanji, Jurassic Park III). Even though a last-minute director-for-hire on The Wolfman, he clearly loves the subject matter, the effects, and the tradition, and as an action director he makes what viewers most want to hum really hum . . . a crazy furry man with claws and fangs on a killing spree! This bodes well for his upcoming Captain America, a movie I’ve waited decades to see.

The new film follows the essential concepts of the 1941 original. Lawrence Talbot (Benicio Del Toro), an expatriate to the U.S., returns to the United Kingdom after he learns about the death of his brother. Re-united with his rural gentry father, Sir John Talbot (Anthony Hopkins), Lawrence gets involved with local beauty Gwen Conliffe (Emily Blunt). A visit to a local gypsy camp concludes in a nighttime attack from a mysterious wolf-creature that wounds Lawrence. Gypsy mystic Maleva (Geraldine Chaplin) warns Lawrence that he has inherited the werewolf’s curse. Lawrence faces the horrors of transformation and the unstoppable killing rampages that follow. A law officer starts tracking down the bizarre killer.

So far, the two films are identical. Many of the changes in The Wolfman are in details. The switch to 1891 isn’t as large as it may seem, since the “contemporary” setting of the original was always tenuous, easily slipping into the appearance of Victoriana whenever the fog rolled in to the Welsh village. The design and photography of the new film are more reminiscent of Hammer horror, but its autumnal Gothic look is grogeous. Lawrence Talbot is now a famous Shakespearean actor, and his return to his family home is because his brother Ben died a gruesome death, and he wants to find the murderer. To tie Gwen closer to the story, the script makes her Ben’s fiancée. The country constable is enlarged into a Scotland Yard detective (Hugo Weaving, whol will play the Red Skull in Captain America) who had worked on the Ripper murders in London, and therefore knows something about what monsters men can become.

But the film makes one very enormous change to Curt Siodmak’s 1941 script, and it isn’t one I can tell you about without ruining the major surprises of the movie’s second half. It’s an enjoyable change, and it means that fans of the original will have something new to watch instead of getting nothing more than a re-tread. 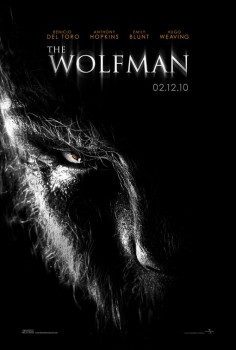 The film hits its roughest patch between the attack on the gypsy camp when Lawrence gets bitten—this is a thrilling sequence that seems partially inspired by From Russia with Love—and the first transformation. The editorial shears feel the most obvious here, with scenes chopping along without a sense that the film is actually advancing. Transitional film effects like jagged dream sequences and sped-up photography of the clouds and the moon belie some post-production chaos. Benicio Del Toro is also at his weakest during this period of suspension. The actor is a rabid Wolf Man-fan, and visually the sort of performer you could imagine turning into a wolf with the ease of simply putting on a jacket; he also bears an uncanny resemblance to Lon Chaney Jr. in his glum and quiet expressions. But often Del Toro seems to be underplaying, and the editing may have harmed his performance. His chemistry with Emily Blunt is also a fizzle, and Blunt shoulders most of the blame for this; there’s simply little personality to her Gwen except detached boredom. It’s a far cry from spunky Evelyn Ankers in The Wolf Man.

However, Del Toro excels in his werewolf shape, and so does the movie. After Lawrence Talbot’s first transformation, shot in quick flashes to save up for an even greater change scene, the movie gets bloody good, sometimes electrifying. The beast is truly unleashed, and with decapitations and intestinal spillage, The Wolfman earns its “R” rating and compensates for the neutered Van Helsing. Del Toro revels in the make-up, but this is also one of the finest moments for make-up wizard Rick Baker, a devotee of Universal’s maker of monsters, Jack Pierce. Baker’s Wolfman design is an homage to Pierce’s for the 1941 film, with some elements from the Hammer classic The Curse of the Werewolf. It’s a look at odds with most recent, highly lupine movie werewolves, and hews closer to the human part of the hybrid. In general, I prefer the more wolfish lycanthropes—but I’ll make an exception here. It’s a thrill to behold this sort of werewolf again, especially when it’s executed so perfectly. CGI is still used to get otherwise impossible shots of the beast dashing on all fours and making animalistic leaps and contortions; but the majority of the work is practical and it’s glorious to see genuine performance and make-up in this age.

The transformations are mostly handled through digital imagery, but in a harsh, jerky style based on Baker’s models. The painful and slow changes recall Baker’s groundbreaking work in An American Werewolf in London. There’s another direct nod to that film: Talbot’s second transformation throws the Wolf Man onto downtown London, where he swiped at a coal-powered double-decker bus (a device that really was in operation for a few months).

The second transformation and attack is the high point of The Wolfman. Aside from giving viewers a fully-lit view of the wolf-out, it also occurs in the perfect setting: the medical theater of an insane asylum. This digs out some of the psychological subtext of werewolf mythology. Psychiatry in 1891 was still in a primitive, torture-happy place—something the film is quiet glad to show us. At this time, the werewolf was psychiatry itself, a brute analogy that has existed for hundreds of years to explain insanity and depraved crime. All the sequences surrounding the asylum are excellent, and the wolf unleash is a cathartic horror rollercoaster.

Although Del Toro gets the title role and the rampage through London, Anthony Hopkins gets the meatiest part in Sir John Talbot. Claude Rains was the anchor for the 1941 film in this part, but Hopkins is a very different sort of country aristocrat and father figure. Acting Sir John as eccentric and probably insane from the first moment we see him, Hopkins appears to be enjoying himself thoroughly. He can make a simple line beat with menace: “Horrible things, Lawrence. You’ve done horrible things.” This is the Anthony Hopkins of The Mask of Zorro . . . he’s out to play.

The Wolfman wolfed down $36 million over the three-day weekend. This wasn’t enough to put it in first place, but is still good news for a film with such public travails. A sequel is a possibility, and Universal has shown interest in reviving their famous monster properties after Van Helsing nearly buried them with a stake and silver bullet through their hearts. (This is the second time I’ve mentioned Van Helsing in this review, and that’s five times too many. ‘Zounds, how I loathe that film.) The Wolfman leaves an opening for a sequel in its conclusion . . . but I think any ending leaves a sequel a possibility. After all, in the original Lawrence Talbot is beaten to death with a silver wolf’s head cane, and he bounced right back from the tomb in Frankenstein Meets the Wolfman.

[…] we see him having the most fun on that jungle gym. I’m in lonely company here, but I also enjoyed The Wolfman. May Joe direct twenty more films! I’ll watch ‘em […]