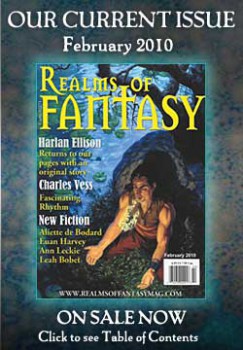 The new Realms of Fantasy coincides with the relaunch (as of December 11, 2009) of an actually informative website since Warren Lapine took over as publisher beginning with the August 2009 issue (and perhaps the fact that  the website of previous owner Sovereign Media was essentially just a placeholder was indicative of the company’s general lack of interest in the magazine that eventually led to its sale). There was a free PDF version of this bimonthly available for a time, but the link seems to have been taken down. Fans of Black Gate magazine in particular will no doubt appreciate the largely sword and sorcery, high fantasy type fiction, as well as the related non-fiction gaming, illustration and book genre reviews. Black Gate fans may also appreciate that their favorite magazine dispenses with high gloss interior color; for some reason the graphic designer(s) of the current RoF think that red and yellow headlines and callouts on a white background  make the magazine more visually interesting; I find it not only ugly, but in certain lighting, difficult to read.

Of interest to the broader science fiction and fantasy audience, however, is a Harlan Ellision® short story  featuring a curmudgeonly character undoubtedly intended to remind you of the copyrighted author. This is another in the genre’s seemingly endless fascination with the Frankenstein trope of the responsibilities between the creator and the created.  Ellison’s spin is to introduce the notion of the stupidity and bigotry of political correctness while tacking on two alternate endings reminiscent of classic Golden Age treatments of this theme from the 1950s/1960s. Actually, I thought the story worked well enough if it ended with “But I had been ignorant of the laws of human nature, and we both knew it was all my responsibility. The beginning,the term of the adventure, and now, the ending” (31) before it branches off to present conclusions from two different perspectives. The second has deeper philosophical implications, but for whatever visceral reasons I prefer the first one. No spoilers here — decide and discuss among  yourselves.

The other stories in this issue are thematically more in line with what you’d expect from RoF.  “Mister Oak” by Leah Bobet concerns a tree in love with a young girl. If, like me, you quickly start to tire with the whole fey talking tree and shrub conceit, hang in there for a considerably powerful ending.

The same cannot be said of “The Demon of Hochgarten” by Euan Harvey. This medieval Nordic detective story features a mysterious Knight of the Bloody Spear  whose ability to transform into a wolf proves handy in investigating acts of sorcery. If you feel like you’ve read countless stories just like this one, it’s because you have.

Aliette de Bodard also travels familiar territory in “Mélanie,” reworking the monstrous bride fairy tale in which the heroine seeks to conceal her bestial nature from a suitor or husband who benefits from the creature’s magicas long as he remains unaware of her true incarnation. However, there are some nice variations on the theme, including a highly competitive school setting in which the ability of math students can literally be seen by equations raging beneath their skins, and that rather than repelled, our hero embraces the animal nature of his beloved.

Also of interest is the cover story, “The Unknown God” by Anne Leckie,  a humorous take on belief systems. Aworo  is a god who takes human form to walk visibly among mortals and spirits alike and who is suffering his own crisis of faith. Turns out that even those who are thought to possess wisdom by virtue of their godhood are uncertain of how to attain it, just like the rest of us. Which would make what goes on in the world much more comprehensible if the being(s) supposedly running the universe were as clueless as the rest of us, not to mention as equally clumsy in love.

I’ve noticed that one result of the new ownership is that  RoF recently is getting featured display in my local Barnes and Noble. The increased exposure, coupled with the new website, should help the magazine get the audience that I imagine will be delighted to be reminded that despite news of its demise, is still very much around.