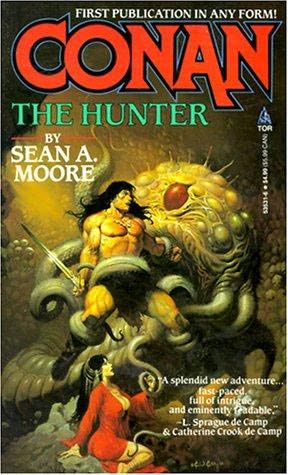 You know I’m getting busy in other parts of my life when I pull out another Conan pastiche review for you here at Black Gate. (I store them up in a locked chest to be used in emergencies.) I’ve so far looked at a book each from John Maddox Roberts, Leonard Carpenter, and Steve Perry. So now it’s time for one from Sean A. Moore.

First, a prologue. (Almost all Conan pastiches have prologues, so why not start a review with one?) There is a moment in Conan the Hunter where a palace gardener beats our hero unconscious. Incredibly, the book is not as completely horrible as that absolutely ridiculous statement would make it sound. But it just has to be one of the most unbelievable moments I’ve read in any Conan story. Go ahead, read that statement again. By Crom, I dare you not to laugh.

Now that I’ve set the tone, it is time to dive into the meat of Conan the Hunter, or at least the gristle.

This is the first Conan novel from Sean A. Moore. Like John C. Hocking, Moore came late to Tor’s pastiche series, and went on to pen a two more before the line went on hiatus. Judging from this outing, Moore’s strengths lie in crafting a clever, dense plot with immense, epic scope, and populating it with an imaginative flood of action and monsters. This novel bursts at the seams with supernatural menaces and crimson battles: A leech beast in the sewers. Hordes of gargoyles. Repugnant, horror-laden traps everywhere. An invincible demon-sorceress trying to revive her race. A cramped duel to the death in the corridors of a palace. A henchman with a magnetic lodestone for a shield. Nifty stuff all around, candy for a heroic fantasy reader.

Yet for all this material, Conan the Hunter can make for miserably slow going. Moore demonstrates two tremendous flaws that impede the novel and make it only sporadically entertaining and otherwise a chore to read.

First, he overwrites to an incredible degree. He fills every scene with twice as much description as it merits. Perhaps the author feels this is a way to imitate Robert E. Howard’s writing style, which often had a thick and swirling feel. But Howard also practiced economy, an ability to make a perfectly beautiful description of setting, an artifact, or an individual with a single thrust of a rapier blade. Moore goes overboard, digging in with scenes of characters preparing for journeys, characters handling swords, characters drinking, and worst of all, characters wondering about other characters. This last particular flaw kills the pacing in a number of places, mostly because the information is already clear to the reader. The characters of Kailash and Madesus are most prone to these long internal maunderings, and they slow the novel to a near halt whenever they start. The author should have dropped the speculation and moved on to the action. The continual ponderings from secondary characters amounts to filler. Howard would hit the reader with only what he or she needed to know before shifting the action to the next exciting sequence. Had Howard written this story, it would have come out to novella length.

Second, the structure of Conan the Hunter is choppy and moves with a start-and-stop structure that makes it difficult to keep up continual interest in the plot. The elimination of a major villain and ally at around the hundred page mark is a serious stumble; it seems as if the story should be over at this point, but Moore must now suddenly shift into another type of plot structure entirely. This first transition is the book’s weakest section, as Madesus unloads a mound of new exposition to shuttle the story into ‘phase two.’ There is an uncomfortable sense that the author is suddenly “making it up as he goes along” during this shift. Madesus, previously one of the most intriguing characters in the book, now stumbles into the generic ‘wise old mentor’ mode after this.

The novel takes yet another shift a hundred pages later, moving the action away from what had been an interesting city-bound adventure into yet another chase across the wastelands toward a ruined temple. (And how many ruined desert temples are there in the Hyborian Age? They’re like strip malls in Orange County!) Along the way is a nearly pointless tavern scene in Innasfaln, and the action sequence that follows is a case of overkill—we’ve had one too many fisticuffs at this point.

Not aiding this sputtering approach to structure is the tendency to suddenly substitute allies and villains for new characters at inopportune moments. Salvorus, the novel’s best-drawn character, starts as the Conan ally, but the dull hillman Kailash abruptly replaces him. Valtresca and Azora appear to be the principal heavies, but the revived Skauraul’s belated entrance (thirty pages before the end!) one-ups them, and Skauraul is too sketchy and generic a villain—really nothing more than a Xaltotun clone from The Hour of the Dragon—to work.

I also shuddered at the too-frequent interference of gods in the story. This feels distinctly anti-Howardian. Seers visiting Conan in dreams is one thing, as in “The Phoenix on the Sword,” but having Mitra actually manifest himself to give a helping hand is something else entirely.

But Conan the Hunter does have some delicious moments where you can almost forget the overall problems. Most of the sequence in the Temple of Targol is excellent, and the blood trap is gruesome. This is some of the best writing in the story. The sewer monster (source of the excellent cover) is great, if unconnected to anything else; it at least keeps interest going in the early pages. The battle inside the palace that ends the novel’s first phase also thrills, even if it goes on too long.

The finale is also well-handled; a lot happens in a short time, with gargoyles and spiders and lances jabbing from the sand. The action plays out breathlessly. Yet Moore spoils it all with a cheat climax, a deus ex machina so poorly hinted at previously that it almost wrecks the entire ending.

I will certainly read more of Sean A. Moore’s Conan work (Conan and the Shaman’s Curse, Conan and the Grim Gray God), since his imagination shows promise. Perhaps in these later works he cut some of the fat off his prose and found a better structure to tell his story.

Thanks Ryan, this has to be one of the last pastiches I have not read. Seems like I thought Grim Grey God was alright but its been quite awhile.

I haven’t read Conan and the Grim Gray God, but I’ve heard some okay things about it. I’ve got a copy sitting in closet somewhere, along with the other pastiches I haven’t read, so I might go start reading it now. (I often find lighter reads are good while I’m working on writing a novel.)

Actually i enjoy reading these conan pastiche reviews, even though i haven’t read any conan pastiches except for some of the Carter and de Camp ones. I’m looking forward to on one of the Robert Jordan pastiches.

His “hiatus” was a fatal car accident in Boulder Colorado in 1998. His wife survived the crash. He had finally attained his life dream of becoming a full time writer shortly before his death.

Honestly, I thought Sean Moore was one of the FEW who could pull off a good Conan story. I think Sword and Sorcery is one of the most difficult genres to write and a select few can pull it off. For instance I love John Roberts Maddox, Harry Turtledove, and Robert Jordan but not one of them could write a decent Conan novel. Put them in their own world and they were much better writers. Moore could pull it off and I wonder what would have happened if he had not died that day if we would be devouring his books. I know I would have.

I enjoy your posts and I find myself agreeing with you more often than not. I too wish I could get a copy of his other two Conan novels. Kindle, Nook, or Smashwords these books please!

‘Conan and the Grim Grey God’ is one of my five favorite Tor pastiches (maybe top three). Moore really surprised me and I’m looking forward to reading his other two.