My copy of The Very Best of Fantasy & Science Fiction arrived from Amazon today, and I dropped everything to read it.  Probably not a good idea, since I had several conference calls and a sales meeting in a skyscraper somewhere in downtown Chicago.  But that’s why I bought a fast car. 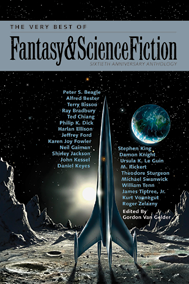 I’m a sucker for retrospective anthologies.  And F&SF is one of my favorite magazines — and has been since I first discovered tattered copies in the tiny library of Rockcliffe Air Force base in Ottawa, Canada, in the late 70s.  Editor Gordon van Gelder has assembled an imposing, 470-page collection spanning more than five decades, starting with Alfred Bester’s “Of Time and Third Avenue” (1951) and ending with Ted Chiang’s “The Merchant and the Alchemist’s Gate” (2007).

In between are stories famous (“Flowers for Algernon” by Daniel Keyes, “The Gunslinger” by Stephen King) and not-so-famous (“This Moment of the Storm” by Roger Zelazny, “Journey Into the Kingdom,” M. Rickett).  Gordon introduces them all in an informative and entertaining manner, occasionally providing glimpses into his editorial selection magic in the process. You can see the complete Table of Contents here.

Just as important, this is a truly handsome book — splendidly designed by the folks at Tachyon Press, with a fabulous cover by David Hardy.  It fits beautifully in my hands, and it even smells nice.

I haven’t dipped far into the book yet.  But I was very nearly late for my meeting, and I don’t regret it one bit.  Check it out.

[…] there seems to be no shortage of anthologies (see John O’Neill’s recent report on The Very Best of Fantasy and Science Fiction. While I don’t really know, I’m guessing that the profit margins for yet another Dozois […]