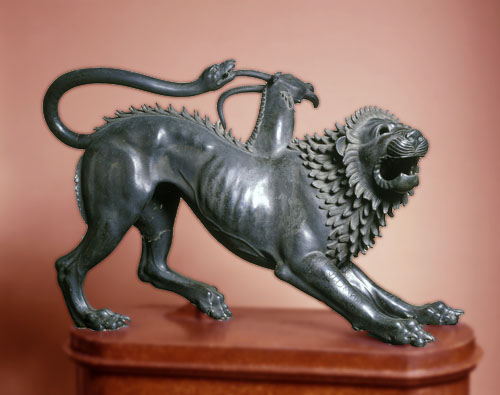 I don’t often get the opportunity to encounter true works of ancient artwork, those anonymous pieces of bronze and stone and gold that appear reproduced in textbooks, volumes of history, and museum brochures. Living on the western edge of the New World means I have a lack of local access to them, and when I’m in the Old World, I’m usually among the artworks of the early modern masters, who painted onto canvas their dreams of the ancients. Not that such art isn’t wonderful, but I’m a classicist deep down in my cerebellum, and I don’t get to engage with the genuinely ancient as often I would like.

But this week I got to stare into the eyeless sockets (which probably once held eyeballs of glass) of one of the masterpieces of the ancient world: the Chimaera of Arezzo, an Etruscan bronze sculpture that is spending a few months away from Italy to lair up in the Getty Villa Museum in the Los Angeles suburb of the Pacific Palisades. I grew up in the Palisades, and it’s still a pleasant twenty-minute coastal drive from where I currently live, but I hadn’t gone to the Villa since its re-opening a few years ago. The Chimaera was an easy way to entice me to my first visit in ages. This is a sculpture that, although I didn’t know its official title until I was a college student, formed part of my consciousness since I first fell in love with Greek myth at a young age. No book could talk about the wonderful lion-goat-snake conglomeration that the hero Bellerophon killed with a throat-coating of lead without showing a picture of this Etruscan masterpiece.

The general Chimaera, the mythological beast, is one of the great monsters of fantasy. It is such an enticing creature with a name that strikes the tongue with the right blend of ferocity and mystery, that when Clark Ashton Smith wrote about the modern literature’s aversion to fantasy, it was the Chimaera that he propped up as his first example: “Chimeras are no longer the model, the infinite has been abolished; mystery is obsolete, and sphinx and medusa are toys for children….” Thankfully, Smith would end up incorrect in the long run, because I found the model of the Chimaera quite alive and well and temporarily living in Los Angeles.

When I first stepped into the red-walled room on the second floor of the Getty Villa where the Chimaera currently resides, I had the same feeling of awe that many art lovers have when they first see the Mona Lisa or an original van Gogh or a naturalist first looking on the Grand Canyon. The Chimaera, although probably sculpted in the fifth century BCE, looks like it might leap to life at any moment and roast and gobble up the tourists who are trying to take digital snapshots of it before the security guard can warn them that they are not permitted to take photos.

Although the name “Chimaera of Arezzo” isn’t a household one (well, maybe if you live in a household of Classicists), the image is one that most people who have studied Classical history, art history, or mythology will recognize. It’s appeared in countless books to illustrate bronze sculpting, Etruscan artwork, and any mention of the Chimaera. (Or “Khimaira,” or “Chimera.” I like the simplicity of the last myself, but the “-ae” diphthong of Latin adds a nice shimmer of the antique, doesn’t it?)

Although Chimaeras have been reproduced throughout the art of classical antiquity, our world uncovered this Chimaera in 1553 in the Tuscan town of Arezzo. (To this day, the statue is associated with Tuscan identity.) Some of the sculpture is a modern reconstruction, such as the length of the snake gripping onto the horn of the goat-head in the middle, an addition probably grafted onto the Chimaera in the eighteenth century. It was most likely Benvenuto Cellini who did the first sixteenth-century reconstructions that repaired the left hindleg and left foreleg. Originally, the Chimaera probably did not stand alone. The anonymous Etruscan who created it around 400 BCE most likely set it in a grouping that included Bellerophon riding the winged horses Pegasus, the hero thrusting down his spear to kill the creature when its fiery breath melted the lead block jammed on the weapon’s tip. 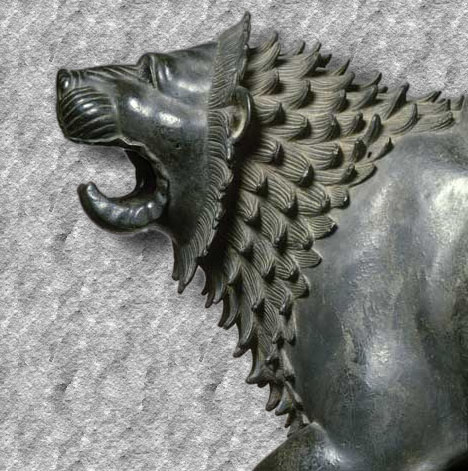 As I write this, I’m sitting in front of the great bronze sculpture itself, the leonine head thrust toward me yet turned just to the left and looking toward its enemy, Bellerophon. Bellerophon is gone, he and Pegasus must live on in other artwork while the Chimaera growls its dying anger only toward us amazed tourists. The detail on the creature is astonishing, especially considering its age: the fine prongs of the lion’s mane, the set of its jaws (once filled with teeth done in a different metal), and the two bloody wounds it has already suffered from Bellerophon’s spear across its rear flank and on the goat’s neck.

When I think about Pegasus, I’m reminded that the Getty Villa—or simply the Getty Museum as it was to me then—formed an important part of my love of fantasy, mythology, and classical history. The movie Clash of the Titans first gave me the concept of an Ancient Greek world of wonder, and the Getty Museum lay only minutes away from where I lived: a destination for school field trips, and a place where I could feel, even on the coast of Southern California above the beach where one day Baywatch would be filmed, that I was among the genuine ancient world. Down in the two main peristyles of the museum, the walls make it impossible to see the modern houses and the Pacific Coast Highway, and the hills that rise behind it are covered with flora similar to that of the Mediterranean.

Aside from the sculpture in the middle of room, the exhibit around the Chimaera at the Getty Villa contains an array of black figure and red figure vases depicting the Chimaera and Bellerophon atop Pegasus; a reproduction of a Roman mosaic showing their confrontation; pieces of jewelry uncovered in tombs starring the three-headed wonder; and seventeenth-century Italian books open to sketches of the Chimaera of Arezzo before the reconstructions added on to it.

On the rear wall of the exhibit room is the most famous quote concerning the creature. Indeed, it’s the earliest one, and it come from Homer in the Iliad. The museum uses a prose translation, but here’s how the passage appears in a recent verse version from Stanley Lombardo:

He ordered him, first, to the kill the Chimaera,
A raging monster, divine, inhuman—
A lion in the front, a serpent in the rear,
In the middle a goat—a breathing fire.
Bellerophon killed her, trusting signs from the gods.
(Iliad, 5.179–182)

I’ll never see a real Chimaera, but seeing this rendition from Arzzeo, the best and largest preserved of its species, is almost as wonderful. (Safer, as well. I don’t have a winged horse or dreams from Athena in which to trust.)