Welcome to the Black Gate GenCon report. My wife and I knew we were entering the looking glass when, on the walk from our parking lot to the Indianapolis Convention Center, we saw a Crusader, 2 Ghostbusters, and guy (or gal) in a white wolf costume … and, oh yes, the women in corsets. Upon our arrival at 9:30 am, the line wrapped around the block, but fortunately we didn’t have to stand in it. For us, it was straight to the Press Room and, within minutes, we were ready to Con.

This is my fourth GenCon and I’m probably close to the double digits on conventions in general, so it’s not an unfamiliar sight to me. My wife, on the other hand, still lives in … well, maybe not fear, but at least mild anxiety. There is a limit to the amount of furriness she can handle in a person, and it comes just shy of white wolf costumes on a sunny summer day.

Fortunately, GenCon has a track of activities “for the better half” – gaming widows and widowers who are dragged along to these events. One of today’s “better half” events – create your own critter. Unfortunately, we arrived a bit late for that activity, so we will leave the event critter-less. We did, however, see this beautiful rendition of the Magic: The Gathering card “Serra Angel,” but they wouldn’t let us take it with us. 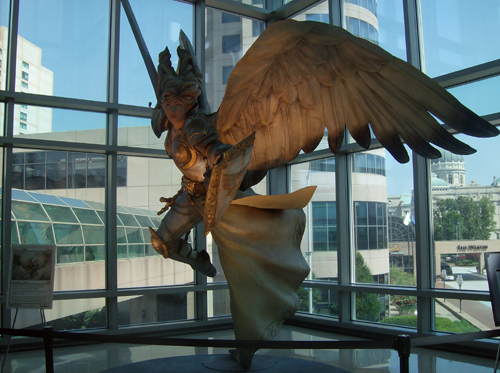 I’m a big fan of the writing seminars , but once we got through our first one (on pitching to game companies) we went into the dealer’s room. Right off the bat, we come into the Catalyst Games booth. There, the kind exhibitors inform me that it’s the twentieth anniversary of Shadowrun … a game which indirectly led me into meeting my wife, so I’m a big fan.

As part of the twentieth anniversary, Catalyst has released a Seattle city guide, Shadowrun: Seattle 2072. The book is slick, to say the least, filled with superb full color illustrations. They’ve also released a full color version of the Shadowrun 4th Edition: Core Rulebook in honor of the twentieth anniversary. The rules are still 4th edition, but if you like books with great full color illustrations, this would be a good volume to add to your collection even if you already have this edition.

Their release at the convention is an adventure module, Dusk: Dawn of the Artifacts I, which is the first in four short adventure modules that will quickly get you into the action of the game, as you search for lost mystical artifacts. The developer anticipates a new module every couple of months, followed about three months later by a fifth book, this one a full campaign book … so that’ll probably be out in about May 2010 or so, if the math comes out right.

I also learned about Catalyst Games’ CthuluTech game, a future Lovecraftian dystopian game, where the secret to unlimited energy has triggered the attention of Cthulu-style dark gods. The developer treats it very much like an “open source” concept, because he’s providing a basic structure that can be utilized in a massive number of different ways, from a mercenary-style military campaign to a more traditional Chthulu occult investigator style … or you can load up a demonic being with battletech and jack in to run it directly through neural link.

So that’s my first report, folks … on to the next booth.