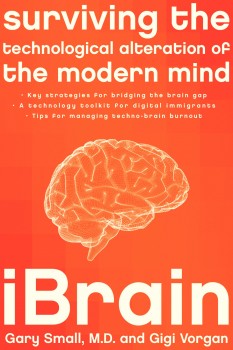 Last month I read a psychology book exploring the implications of the digital information age. In iBrain: Surviving the Technological Alteration of the Human Mind, authors Gary Small and Gigi Vorgan walk the reader through the possibility that the influx of digital communication technology and social networking tools has not only changed the way we behave, but it is also causing our brains to evolve differently. Small and Vorgan discuss the gap between “digital natives” (Generation X on up) and “digital immigrants” (everybody else) and cite psychiatric studies showing behavioral changes that have occurred from a flood of multi-tasking with digital technology and the different parts of the brain that are activated by this technology.

Thankfully, iBrain isn’t an anti-technology screed—you can find plenty of those, and they won’t do one bit of good in halting technology’s march. But the book does fail to follow through on the grand promise of the first half where it shows the tremendous psychological changes that have swept through our society and right into the neurons in our gray-matter. Ultimately, iBrain devolves into a tepid “self-help” book that can only advise that maybe digital natives should turn off the computer and read a book or go outside occasionally so they can also learn social skills. Oh, and if you’re a digital immigrant, maybe you should take some computer classes or ask younger people for help.

Well I could have told you that, and I don’t have an M.D. in psychiatry like Gary Small. It’s a shame that a great premise in book like iBrain has to collapse into humdrum advice that anybody could come up with.

But then, isn’t iBrain self-defeating because it’s a book, a medium that itself feels is endangered? (There is a Kindle version as well.) Perhaps I should have seen the book’s final disappointment coming, because in the rapid digital age, it seems that nobody really knows what’s ahead or what will happen. Small and Vorgon can study it all they want, but at the end even they have to shrug and suggest maybe we should seek to put some analog back in our lives. (Wine-tastings are always nice.)

I wonder how the two authors might have changed their thesis if they had written it after 25 June 2009, a day I will always mark in my mental calendar as the official arrival Network Mind World. We all knew before that day how fast info could spread through email, forums, text messages, Twitter, Facebook, et al. But never before did I witness that rapidity in such compact form as the day the most famous and still-living pop musician ceased to be still-living.

I sat at my computer at watched the news of the death of the famous pop-star spread across sites and networks like a barbarian swarm that had taken to using sports cars instead of horses. It was astonishing; I thought digital tech speed couldn’t surprise me, but put my anticipations up against the death of the man who made the best-selling album in history and all limits crash down before the Porsche-driving Gothic hordes. I tried to imagine what Elvis’s death would have been like if the same tech had existed back in the ‘70s. My iBrain nearly blew up thinking about.

Robert Fitzgerald, poet and translator of Ancient Greek, suggested that a typical bardic performance in the early Iron Age, the time when the figure who might have been Homer was supposed to have lived, probably lasted four hours. Given this time, Fitzgerald estimated, it would take six days to complete a performance of The Odyssey or The Iliad, with four books done at a sitting (and, indeed, both of the two poems seem to divide neatly into six sets of four books). I mentioned this to someone at a 4th of July party, and he immediately remarked: “Now we have Twitter. A hundred and sixty characters.”

From Homer to Twitter. I thought about the speed of news in the Bronze Age that “Homer” sang about, how Telemachus set out in his search to learn news about his father Odysseus’s fate. Then I thought about the near pre-cognition that seemed to surround the spread of news about the death of a famously bizarre pop-singer. And then my iBrain nearly exploded again.

Can one still live both analog life and digital life? Of course. In fact, I think do a decent job of it. I still do some of my writing free-hand in composition books. I like to read from paper-bound volumes, and won’t let Amazon trick me into buying a Kindle. I’ve studied books on bettering my social interactions and listening skills. All this, and I can still write a blog, use an iPod, and don’t get confused when someone spouts the term “URL.” I also think I would enjoy listening to a four-hour recitation of part of The Iliad.

The combination of the disappointing but initially fascinating book iBrain, the info-copalypse of 6-25-09, and lessons from Homer, has made me more aware than ever about the re-wiring of the human mind… not only society, but biology is changing. But if the authors of iBrain can’t figure it out, I imagine I can’t say anything prophetic about it either accept to note its affects. I do know that I still prefer the book page to the computer screen, but I’m glad I can order rare books almost instantly through the ‘net. That’s a compromise I can live with—and if this is a bit of wisdom that I can pass on to benefit another “digital native,” then I think we’ll survive the next decade without Skynet taking control.