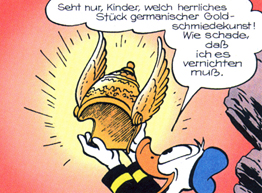 Who knew? The national weekly Micky Maus, featuring mainly Donald Duck, sells 250,000 copies in German, beating out Superman. Another 40,000 mostly adult readers snap up the monthly all-Donald specials. The fan organization D.O.N.A.L.D. (an acronym for “German Organization for Non-commercial Followers of Pure Donaldism”) holds a yearly convention, philosopher Max Horkheimer admitted to reading Duck comics at bedtime, and many Germans credit the Donald with introducing them to the literary classics. He remains the most popular children’s comic in Germany.

As Susan Bernofsky writes in the May 23 Wall Street Journal, it’s because Disney’s German licensee, Ehapa, retained artistic control over the translations. Donald was introduced during the years following World War II, when school officials were setting fire to American comics and some were proposing laws to ban comic books altogether. Ehapa hired a Dr. Erika Fuchs, who had never laid eyes on a comic before she was handed her first Donald Duck story. Her job was to breathe a little erudition into Disney. In her version, Donald quotes (and misquotes) Schiller and Goethe, he’s prone to philosophical musings, and even ordinary dialogue is cranked up: “I’d do anything to break this monotony!” becomes: “How dull, dismal and deathly sad! I’d do anything to make something happen.” A cat belts Wagner. And through it runs a vein of political critique, mostly, it seems, aimed at Nazism and intolerance.

Dr. Fuchs supplied the German for Donald Duck for a rather amazing 54 years, until her death in 2005.

Wow, that is fascinating. I’m a big Carl Barks fan (artist and creator of Uncle Scrooge), whose work I still adore – and who I introduced to my kids as soon as they could read. We still have a pile of Uncle Scrooge comics on the bedside table.

So let me get this straight. Dr. Fuchs supplied German dialog for the Donald Duck strip, at first providing loose translation but gradually telling her own stories and injecting a little of her own imagination into each issue. And she did all this in the tiny existing word balloons in a pre-drawn comic strip? Wow. That boggles the mind.

Seems like something that would make a great creative exercise, actually. Maybe someday all children will be handed a Donald Duck comic strip with the word balloons blank, and told to tell their own story. Wonder what they could come up with.