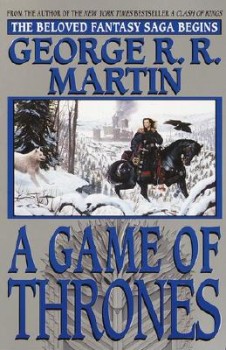 I’m rather hugely excited about the prospect of an adult fantasy series — 10 hours or so of serious, secondary world, medieval-inspired fantasy — being delivered to my living room sometime next year. Not that anything is certain yet — but I have to be optimistic with this one. And I’m not just giddy at the prospect of my own selfish enjoyment of an epic of politics and battles in a fantasy world, I see this as a potential sea-change in the way the public regards secondary world fantasy.

Of course, Jackson’s Lord of the Rings was tremendously received, and spawned a lot of imitation (though not nearly as much as I would have predicted), but it still remains somewhat singular. And I don’t think it challenged any notions of what fantasy is among the general public — if it was enjoyed by millions of adults it was also, I think, safely relegated to a certain category of film that can be enjoyed by all ages.

Not that there is anything wrong with that, but I think a project like HBO’s A Game of Thrones has the potential to change the way adults look at the genre. Giving us something as brutally human as Deadwood, or as racy and intricate as The Tudors, or as emotionally absorbing as Band of Brothers — in short giving us something that could probably only be achieved through the medium of cable television — will change the perception of the genre for the better.

This could be the cusp of a new fantasy renaissance, and A Game of Thrones could be the thing that cements a mainstream acceptance and engenders a new enthusiasm for the form. At least, that’s what I’m pulling for.

To keep abreast of the series as it develops check out Martin’s news site, or a site dedicated purely to the series, Winter is Coming.
__________
BILL WARD is a genre writer, editor, and blogger wanted across the Outer Colonies for crimes against the written word. His fiction has appeared in numerous magazines and anthologies, as well as gaming supplements and websites. He is a Contributing Editor and reviewer for Black Gate Magazine, and 423rd in line for the throne of Lost Lemuria. Read more at BILL’s blog, DEEP DOWN GENRE HOUND.

HBO’s A Game of Thrones — BillWardWriter.com

This is terrific news! I hope it happens. This would be the best HBO series since ROME!

I was one of those people who held out for YEARS…hearing everybody rave about A SONG OF ICE AND FIRE and just not believing the hype about it. But finally, last year I gave in and dubiously picked up the first book. Well, not only was it terrific, it was addictive…I burned my way through those books one after the other.
Martin’s grasp of character is absolutely stunning. His fantastic world isn’t nearly so interesting as the characters who inhabit it. He makes you CARE for these characters. He makes you HATE some of these characters…and sometimes makes you CARE for the ones you HATE! His perfect grasp of point-of-view storytelling has changed the way I approach my own writing.
The other magical thing about these books is how very based in reality this fantasy world is. It’s been compared to “historical fiction”…it just so happens to be the history of an imaginary world. But the mud, blood, sweat, dirt and tears are steeped in realism. Which only makes the heroics that much more heroic…the stakes are life-and-death, even in the smallest of battles.
I, for one, will keep my fingers crossed that this becomes a high-quality HBO series. I’ve been waiting for something to match the power and majesty of ROME. This…could…be it.
Meanwhile, the final volume of the saga is due to hit stores this fall! Worth the wait.

Meanwhile, the final volume of the saga is due to hit stores this fall! Worth the wait.

A slight correction: “A Dance with Dragons” will not be the final instalment. However, this is a brilliant series that has already achieved great things and broken more than a few moulds. Highly recommended for those who enjoy an intricacy and detailed character development.

Once I clear my plate I’m definitely taking the plunge — it’s the sort of thing I want to read before I see it on film.

Though I suppose that means I’ll be howling with the rest of the fans years from now waiting for one of the future volumes.

Yeah, don’t worry about it–just dive in! It’s a series of terrific reads…an addictive secondary world. Martin will be writing these books until the day he dies, I’m sure, so there’s really no reason to wait for that day. Hell, there’s already like six books to keep you busy!
I was as skeptical as they come. But the proof is in the pudding, as they say. Or, in this case, in the pages…