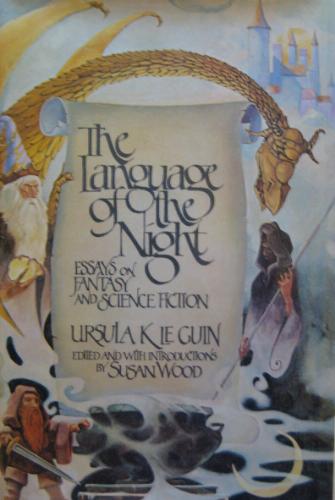 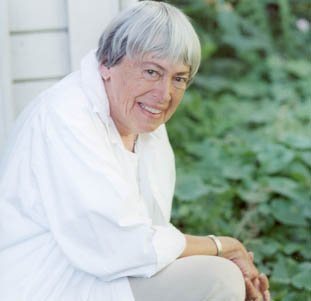 I recently reread Le Guin’s Language of the Night, and for a while I thought it might be a mistake. The book is a hodge-podge: printed versions of short speeches, introductions to her earlier Hainish novels, full essays with footnotes to provide that added kick, and a light frosting (in the edition I was using to reread) of Le Guin’s own second thoughts (mostly about issues of gender). Even back in my 20s I didn’t think all this stuff was equally valuable, and on my recent reread I was finding that a lot of what I had once taken as axiomatic was now useless to me.

For instance, I was struck by the way UKL made casual generalizations that were really unfounded, e.g. the idea that France “had no tradition of fantasy for the past several hundred years.” In my lost youth, I assumed she knew what she was talking about. Now I think: What about Anatole France? Jules Verne? Guy de Maupassant? Charles Perrault? The Absurdists? Of course there is a tradition of fantasy in France.

She’s sort of a snob, also. She sniffs about “hack westerns” that are “sterile, hopelessly sterile.” When I first read this, I would have as soon put my hand in a meatgrinder as read (or watch) a western. Now I’ve read a few and seen more than a few, and I see in Le Guin’s easy dismissal (and my own) a prejudice born largely of ignorance. She insists that there is a “difference between the Batmen and Supermen of the commercial dope factories and the timeless archetypes of the collective unconscious” (such as Apollo or Dionysus). I don’t believe in that difference, anymore–I think it’s largely a matter of which symbols a secular priesthood has marked out as worthy of reverence and which ones have not been so marked.

It’s not all bad, by any means, but the good and the bad are jumbled together through the volume. Take style, a realm where (in my view), Le Guin reigns supreme. One of the essays in the book, published also as a separate pamphlet, is the classic “From Poughkeepsie to Elfland.” In it, she takes one Katherine Kerr’s early Deryni novels behind the woodshed for a devastating display of critical acumen. In contrast, she cites examples from three fantasists she considers great stylists, including E.R. Eddison and Tolkien. (Sic. Lots of people knock Tolkien on stylistic grounds, but I still think they’re wrong and Le Guin is right.) So far so good. Her third example of a great fantasist/stylist is Kenneth Morris.

I don’t know if you’ve had occasion to read Kenneth Morris, an author not often read nowadays. His claim to fame is the invention of Celtic fantasy, a subgenre which is still going strong. Let me put this as gently but as accurately as I can. I think Le Guin overrates Morris.

Suppose someone came to me and said, “Enge, Enge of many names of which I know that one, and thus I call you Enge, you are wise in the way of these things which need so much wisdom in their knowing. Indeed, your knowing is as vast and fluffy as yonder vast and fluffy cloud in its vasty fluffitude yonderwards. Did I want to immerse myself and swim in a narrative torrent of Welsh myth, what works would you commend as refreshing story-rivulets to constitute that great roaring river of Cymric dream?” (Which they might do. These things happen, especially in Kenneth Morris novels.) To this person I would recommend Evangeline Walton’s novels, or a translation of the Mabinogion. And if they said to me, “Enge, oh worthy Enge, oh balding yet spritely Enge, James by name, Jacobus in the ancient Italian tongue that essayed the emprise of the universal world, oh Enge whose angular name suggests a cornerstone of crooked wisdom, what of those books by Kenneth Morris I see stacked in separate seemliness apart from others? They are three in number, being neither two or less, nor four or more, but three. Are there not three realms of afterlife in Dante’s dream? Is not the triune goddess three: mother, maid and crone? Had not Odin two brothers? Is this not a triple destiny of three that leads me to ope with glistening eyes these precious tomes?” To this person I would say, “Morris? Screw him. He couldn’t carry a plot if someone wrapped it up for him and put it in a paper bag. Plus you wouldn’t believe how wordy and bombastic he can be. Okay, maybe you would.”

I seriously spent years tracking down Morris’ first two novels and his collected stories, because of Le Guin’s glowing recommendation, and I absolutely cannot recommend them. If I had come across Morris first, before reading Charlotte Guest, or Walton or some other stuff, maybe I would have found them revelatory. Or maybe I’m just a coarser person than Le Guin, unfit for the verbal music that Morris makes. Be all that as it may, Le Guin’s praise of Morris was one of those things that made me roll my eyes on my recent reread.

Still, I would recommend that people interested in reading and writing fantasy get hold of The Language of the Night and give it at least a look-through. Le Guin writes fantasy and science fiction brilliantly (if a tad didactically); as I see it, no one in the genres has ever written better than her best work (e.g. the Hainish novels or Earthsea or the recent Lavinia). But she also writes brilliantly about the activity of writing, which is a distinct and equally remarkable gift.

Here she is on art and entertainment:

I totally oppose the notion that you can put Art over here on a pedestal, and Entertainment down here in a clown suit. Art and Entertainment are the same thing, in that the more deeply and genuinely entertaining a work is, the better art it is. To imply that Art is something heavy and solemn and dull, and Entertainment is modest and jolly but popular, is neo-Victorian idiocy at its worst. Every artist is deeply serious and passionate about their work, and every artist also wears a clown suit and capers in public for pennies.

Here she is on telling the truth with fiction.

In so many words, she says what cannot be said.