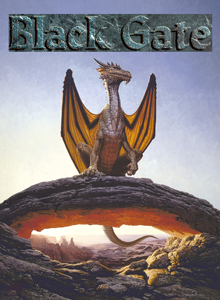 It’s been awhile since the premier issue of Black Gate stormed onto the fantasy landscape, but even now it continues to attract new readers and stellar reviews. The latest rolls in courtesy of Blue Tyson, an Australian fan who runs a number of different blogs that cover the sci-fi and fantasy fields. Tyson recently ordered up a batch of Black Gate back numbers, and he’s set to review them one by one on his website. So what did he think of those classic Issue #1 tales from such talents as Karl Edward Wagner, Michael Moorcock, Charles de Lint, Richard Parks, and Jeffrey Ford? Read on to find out.

And if you haven’t picked up Black Gate #1 yet, you better hurry. Like a fortuitous rift in the space-time continuum, we still have a few copies available on the website — but that window of opportunity won’t last forever. Order your copies today, and discover what reviewers and readers alike have been raving about.