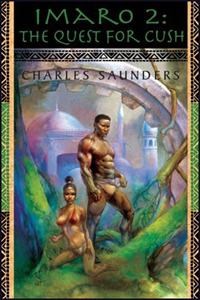 Imaro ranks among the all-time great fantasy heroes, a warrior stalking through a fantasticated, prehistoric Africa brimming with sword-and-sorcery pleasures. The character’s creator, Charles Saunders, is legendary in the field as the first black author to make a splash in the genre, ingeniously playing off of the work and headlong style of past masters like Robert E. Howard while creating a startling new fantasy world with all the quasi-historical verisimilitude of Tolkien’s Middle-earth. The result is sui generis, a brilliant evocation of S&S that hasn’t been seen before or since.

Black Gate regular Ryan Harvey takes a look at the new reprinting of the second Imaro book, The Quest For Cush, and tells us what has changed since it was first published back in 1984. It’s a series that no reader who claims to be a fantasy fan should miss.