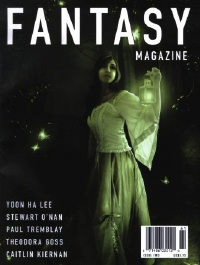 Black Gate correspondent David Soyka continues his search for the best in new fantasy — and has some real success in the pages of the impressive new Fantasy Magazine:

The issues I’ve seen feature wistful-looking young women gazing at something presumably magical, leading you to think the contents concern themselves with faery land kind of stuff. Not quite. . . [Some of these stories] could just as easily have appeared in a literary magazine, as Toni Morrison-styled magic realism. None strike me as mere “escapism.”

Join David as he looks at new work from Theodora Goss, Stewart O’Nan, Darrell Schweitzer, Midori Snyder, K. D. Wentworth and many others, in recent issues of Fantasy Magazine, Realms of Fantasy, and Heliotrope.