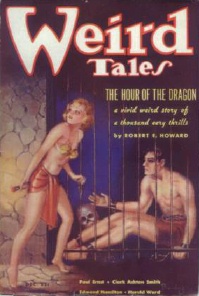 Sword-and-Sorcery is enjoying something of a twenty-first century renaissance (though don’t start looking for a S&S section at Barnes & Noble just yet). While there are several talented modern practitioners, its roots remain firmly in the past, in authors such as Fritz Leiber, Robert E. Howard, and L. Sprague de Camp.

But if you’re a new fan of the genre, it’s not always easy to find. In fact, the demarcation between Sword-and-Sorcery and other forms of heroic fantasy isn’t always clear, and many modern critics don’t even bother. Is it Lord of the Rings? Conan the Barbarian? What is Swords-and-Sorcery, exactly?

Join Black Gate author Joseph A. McCullough V as he explores this question, with special regard for the two authors regarded as “truly representative of heroic fantasy,” and a look back at some of the genre’s most influential and important works.