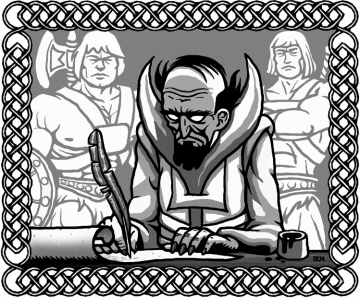 This is a Special Presentation of a complete work of fiction which originally appeared in Black Gate 14. It appears with the permission of Alex Kreis and New Epoch Press, and may not be reproduced in whole or in part. All rights reserved. Copyright 2010 by New Epoch Press.

To the noble citizens of the People’s Republic of Falland, and to the General Directorate that serves them: I, Gharad Arvelaird, called the Undying, humbly apologize for my crimes against the People and against nature during my illegitimate reign as the Supreme Archon of Falland.

I write these words of my own free will. Let those with understanding read them carefully and discover wisdom here.

I fully understand that I can never deserve forgiveness from the people I have so deeply wronged, and even were I forgiven I could never be released from my imprisonment. I am grateful to the People of Falland and to the custodians of Castle Ironbound for allowing me to remain here for the eternity that stretches before me.

Of crimes against nature, I am guilty. I enslaved the hearts of men with the black enchantment of the Orb of Apollyon. I really ought to have known better. The Orb is a power far beyond that intended for man. The Directorate made a wise decision in securing the Orb in the People’s Vault, where it will be safe from misuse.

I am very sorry about seizing the throne of Falland and establishing a dictatorship based on terror and intimidation. As ruler of Falland, I enforced a number of highly unfair and immoral policies for which I now feel very badly, including putting all orphans raised by any forms of wildlife to death, and ordering the execution of all wandering bards (although I must say in my defense that that decision was not entirely unpopular). I congratulate the Directorate for their more enlightened social and economic policies, and am certain that their wisdom will see Falland through these deeply troubled times. I urge the People of Falland to be patient while awaiting results from the Directorate’s programs.

If I had the chance to do it again, I would never have perverted nature and desecrated the holy by destroying the bones of St. Elias the Healer in the ritual that granted me immortality. While it is a natural thing for men to wish to live forever, it is not given to us by nature to have beyond our allotment, and I was wrong to offer to grant immortality to those of my followers who aided me in significant ways. It is for the best that I am no longer in a position to do so.

I am particularly embarrassed that I ordered the foul murder of Giles Sunbearer, who entered Castle Ironbound in a perfectly reasonable attempt to put a stop to my illegitimate reign. His plan of disguising himself as a clan chieftain who wished to enlist his tribe in my armies was ingenious, and if not for the fact that all of my guards knew what he looked like and had orders to stab him on sight, would undoubtedly have worked. Once Giles was dead, his companion Polonius Seidkirk was of no further threat to me, and thus having him executed was unwarranted. I feel terrible that I propositioned Giles’s lovely companion Raven Livintra so soon after Giles’s death; it was tasteless and inappropriate. I should have waited at least six months, and I certainly should not have had her killed when she rejected me. Finally, it was cruel and unnecessary to feed Giles’s clever pet marmot, Twiggy, to my wolves.

I wish to acknowledge the profound contribution that Director Van Marshall made when he recognized his deeper duty to the People of Falland, resigned his position as Supreme Commander of my Mighty Legion of Terror, and delivered me into the hands of the People. He richly deserves his new position as Intendant of the General Directorate, and the People of Falland are fortunate to have a man of such vision as their most devoted servant. I am certain that he will receive the rewards that he deserves. He will be an example for generations to come.

I further wish to apologize to the many men and women whom I deluded into serving me. The very fact that some of them fill their new roles as free citizens of Falland with such zeal and dedication, despite the loss of the base monetary rewards and perquisites with which I compelled their service, reveals their true value and character. I wish them the best of fortune in their new jobs as farmers and shopkeepers. For those of my former followers who are rightly and justly imprisoned, I urge them to seek forgiveness from the great and noble People of Falland. Only in joining with me in penitence can they hope for the liberation of their spirits. Surely they will be rewarded for their efforts.

It is only with hopes of personal salvation that I write these words. Although I remain imprisoned here in the topmost room of the north tower of Castle Ironbound, and the People of Falland are proudly and triumphantly carrying forward the banner of the Republic, I hope that someday I, too, may gain in the tiniest way from the reflected glory of the inevitable march of progress.

Thanks to my crimes, I am cursed now to bear the burden of my guilt for the millions of years until the sun cools. I resolve to use my endless days to serve the People of Falland in the hope that perhaps someday the People’s unbounded forgiveness will fill even the bottomless pits of my crimes. I pray that, despite the terrible indignities I visited them, those of purest and most open hearts will look back upon the reign of Gharad the Undying as only the beginning.

“The Renunciation of the Crimes of Gharad the Undying” originally appeared in Black Gate 14.

10 thoughts on “Special Fiction Feature: “The Renunciation of the Crimes of Gharad the Undying””