This is an excerpt from the novel Blood and Iron by Jon Sprunk, presented by Black Gate magazine. It appears with the permission of Prometheus Books and Jon Sprunk, and may not be reproduced in whole or in part. All rights reserved. Copyright 2014 by Jon Sprunk, LLC. 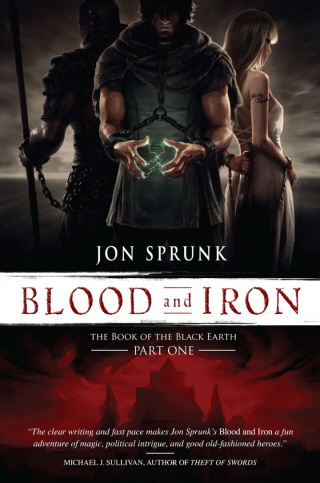 Jirom reeled back with blood pouring into his right eye. He blinked it away as he retreated. He blocked a hard jab and grimaced as the iron spikes protruding from his opponent’s gloves gouged long furrows down his forearm.

Boos rained down from the stands where workaday freemen of the empire stomped and swilled from clay mugs. Their betters sat in shaded wooden boxes along the top of the tiny arena, fanned by slaves and served wine from silver chalices. Jirom would’ve killed for a flagon of beer right now.

A blow to the ribs knocked the air from his lungs and left stinging gashes along his side. Jirom covered up and circled away, and the crowd continued to make its displeasure known. His opponent was called the Lion. He was ferocious, young, and as strong as his namesake. With his light complexion and proud, hawkish nose, he could have passed for a member of the upper caste except for his iron collar and the sigil — three diamonds joined in a triangular pattern — branded on the right side of his face that marked him as a permanent slave, unable to ever regain his freedom again. It was possible his family had sold him into slavery as a child, or he’d insulted the wrong person. There were many ways to end up a slave in Akeshia, as Jirom well knew. Most gladiator bouts — whether fought with sword, spear, or bare-handed — didn’t last long because the fighters were criminals or slaves who had sinned against their masters. They usually died their first time out, fed to the more experienced gladiators. But the Lion was a different breed. Jirom didn’t know his story, save that he’d been brought down from Chiresh for these games. That meant money had been invested in him — a lot of it.

Jirom blocked a right hook that would have caved in his head, and more blood poured down his arms. As he stepped back from a straight-armed jab, his shoulders hit the rough boards of the arena’s eight-foot-high partition. A hard punch to the gut nearly forced him to drop his guard, but he saw the follow-up to the head and slipped away. Something wet and sticky struck his back. Rotten pomegranates and oranges landed around him, making pulpy divots in the sand. Jirom looked into the stands. In one of the private boxes, a portly, middle-aged man with deep brown skin was talking to an equally portly, slightly older patrician. The first man was Jirom’s owner, Thraxes, so engrossed in conversation that he wasn’t even watching the bout.

A grunt warned Jirom in time to cover up before a powerful clout smashed against his temple. He staggered, his vision fading into black-and-white spots, before righting himself. Through the speckled haze, he saw the Lion drawing back for another blow. Jirom slipped past a punch aimed at his chin and pushed off to make some space between them. More jeers rocked the arena.

“Come on, you dog!” someone in the stands taunted. “Fight!”

Jirom slapped away another punch and continued his slow retreat around the pit. The familiar twinge in his lower back from an old injury climbed up his spine, making every movement that much more painful. He glanced up to the private boxes at the wrong moment, and his opponent charged with a hoarse bellow. Jirom covered his face as he backpedaled, but a couple punches got through, drawing more blood. His feet got tangled up, and he fell hard on his backside. A kick to the back as he rolled over sent jangling shocks of pain down his legs. His opponent stood over him with arms raised to the crowd, and the onlookers showered him with adoration. Thraxes was still engrossed in his discussion.

Jirom crawled to his knees as the Lion paraded around the arena. His opponent didn’t give him time to fully recover before charging at him again. Jirom circled away to his left, always the left, and more boos came down from the stands. The people wanted to see death.

His or mine, it doesn’t matter whose.

Another hard blow almost knocked Jirom down again, but he kept his footing. The Lion came after him, relentless and seemingly inexhaustible. If anything, his attacks were getting stronger and more confident. Jirom glanced up. Thraxes was now standing in front of his seat. With a bored expression, the slave owner yawned and scratched his ample belly. That was the signal.

About time, you fat bastard.

The Lion unleashed another straight punch with a growl. His eyes widened as Jirom caught the fist with an open hand. Air exploded from the Lion’s mouth as Jirom drove his other fist into the younger man’s ribs. A punch to the back of the ear dropped the Lion to his knees, and the next one laid him out flat with blood trickling down his branded cheek.

Jirom felt the rage churning inside him. Breathing through his mouth because his nose was clogged with blood, he knelt down and wrapped both arms around the Lion’s neck. With a heave, he twisted until he heard the spine snap with a sharp pop. The crowd roared with approval.

Cheers and a few copper coins fell from the audience as Jirom walked to the gate, but he ignored them. As he traveled down the dark tunnel to the slave cells, scores of feet pounded on the boards above his head.

The sweltering chamber at the bottom of the tunnel was filled with men, some standing, others sitting on benches. Most wore little more than a loincloth and a layer of sweat. Moldy sawdust covered the floor. The veteran gladiators called this area the Temple for all the prayers these walls had heard.

Jirom sat down and peeled off his gloves. His arms were lacerated by dozens of cuts and punctures. More injuries crisscrossed his torso, but none of them looked serious. A comely slave boy approached with a basket of bandages torn from old, bloodstained clothes. Jirom leaned back as his wounds were smeared with a thick liniment and wrapped up.

A bulky Akeshian called Fat Rabok shuffled past. His tight leather breeches squeaked with every step. “You live to fight another day, Jirom. Eh?”

Rabok shrugged, his thick shoulders nearly touching his neck. “That is a good thing, my friend.”

Jirom chuckled, feeling the tension of the fight leave his body. “Perhaps.”

The slave boy’s hand crept up his thigh to tickle under his loincloth. Jirom swatted it away. He was too tired for sport… for now. “The gods smile on you, Rabok. And grant you a swift death when the time comes.”

The hefty fighter laughed and slapped his hands together. “The gods can go bugger themselves for all I care.”

As Rabok headed up the tunnel toward the arena, Jirom closed his eyes. The noise of the crowd grew as the gate opened and then died away with its slamming shut. Every inch of his body ached. His bones ached. Yet the cuts and the bruises would fade. Seven months of fighting in these small-town arenas, and before that twenty-odd years of selling his sword from the steppes of Scavia to the shores of the Western Ocean — soldiering under so many flags he couldn’t remember half of them — had left him with a weariness inside that never healed. When his company was captured after a campaign along the Isuran border, every fighting man was given the choice of chains or crucifixion. Jirom chose slavery. Now he was still fighting for money, but this time with a brand on his face and an iron collar around his neck. Yet it was better than the alternative.

Hearty laughter jarred him from his thoughts. Jirom opened his eyes as his owner entered the Temple. Thraxes waded among the gladiators, talking to his fighters and those he wanted to acquire. For an owner, he was well-liked in the pits. The slave boy darted away.

Thraxes pursed his lips in an imitation of concern as he looked over Jirom’s battered frame. The expression almost looked convincing, if you didn’t know him. “The mighty warrior from the south wins again. Very impressive.” He patted his heavy purse. “And very lucrative.”

“Ah, Jirom. You know slaves are forbidden from keeping money. Otherwise, I would be honored to share the winnings. But one day perhaps you will be free, and then you will be a rich man.”

Jirom curled the bandaged fingers of his left hand into a fist. “I’d settle for killing you.”

“Is that any way to treat the owner who just secured you a fight in Sekhatun?”

Jirom lowered his hand and closed his eyes again. Thraxes lied as easily as a Myrish trader. “Go away before I do something we both regret.”

“I swear upon the Sun Lord himself, this is the truth. The man I was sitting beside today, do you know who he is? Mituban, chief proctor to Lord Isiratu! He was very impressed with our performance.”

“Of course! He said he would speak with His Magnificence about bringing you to the imperial gladiator circuit. Sekhatun isn’t Ceasa, but it’s a damn sight better than this cesspit.”

“Think of it as an opportunity. To fight in the imperial circuit before all the lords and ladies. You might even earn your freedom someday. Then who will you thank?”

With a grunt, Jirom settled back against the wall with the urge to throttle his owner burning in his gut. But he was too tired to move. “Bring me some beer.”

Thraxes slapped him on the shoulder and laughed. “Only the best for my champion!”

As the man left to the clap of fine leather sandals over the dusty floor, Jirom considered his future. More fighting. More crowds craving blood. More pain until the day he fought someone better. Then, if he was fortunate, a quick death and a shallow grave. His breath left his lungs in a heavy rush. This wasn’t the life he’d imagined. But what could he do?

If I was ten years younger, I’d break out of this place. Maybe go back south and offer my spear to another company.

Jirom climbed to his feet, feeling every day of his thirty-six years. He held up his battered hands and eyed the cuts down his arms, across his body. How much longer could he survive like this?

The roar of the crowd burst into the room as the gate opened. Fat Rabok emerged from the tunnel, covered in blood and sweat. His right hand was bare, the fighting gauntlet torn away, but he was smiling broadly enough to light up the dim chamber.

Rabok slapped his belly with his free hand. “Aye. And tonight I will feast and fuck and wake up tomorrow to do it all again.”

Jirom walked through a low doorway and down a narrow corridor toward the gladiator cells where — if Thraxes wasn’t lying — a pitcher of beer waited for him. Maybe he’d send for the boy to come visit him after all, if he didn’t fall asleep once his head touched the mattress.

Overhead, the ceiling’s boards trembled as the crowd welcomed another pair of fighters. 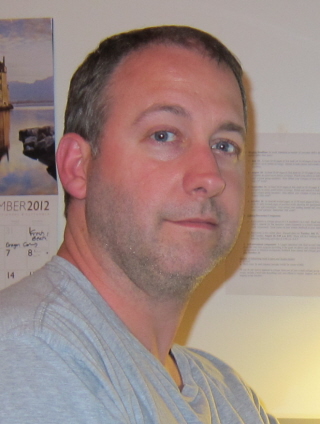 2 thoughts on “Black Gate Online Fiction: An Excerpt from Blood and Iron”